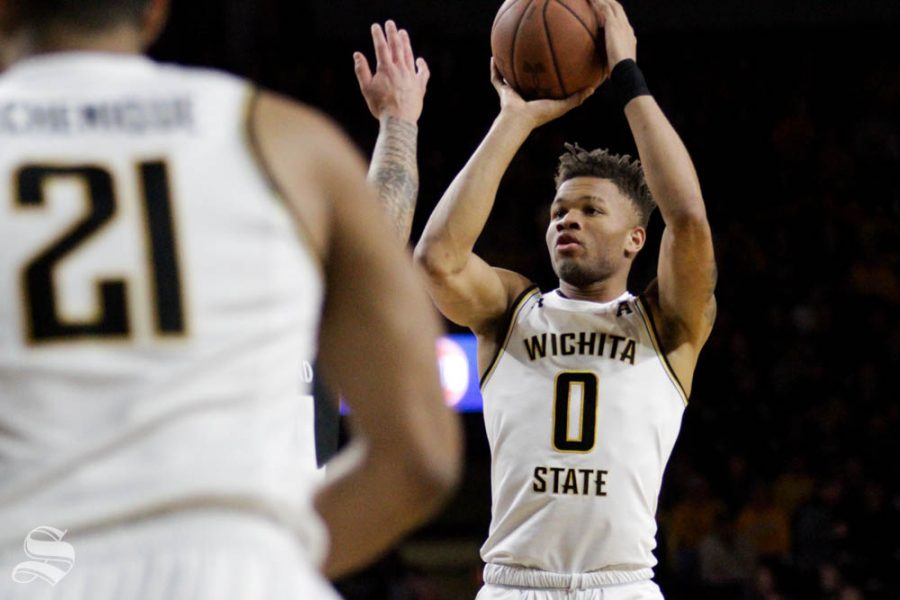 Wichita State sophomore Dexter Dennis shoots a three-pointer during the game against Cincinnati on Feb. 6 inside Charles Koch Arena.

Wichita State combo guard Dexter Dennis announced his intentions to enter his name in the NBA Draft on Thursday afternoon.

Dennis and the coaching staff agreed that it would be best for him to get his name out there for NBA teams during this process. He will not sign and agent in order to keep his NCAA eligibility.

“I’m looking forward to familiarizing myself with this process, gathering feedback from NBA teams and getting my name out there,” Dennis stated in identical Instagram and Twitter posts Thursday.

In an article released Thursday morning by The Athletic’s CJ Moore, Head Coach Gregg Marshall said that Dennis has said he intended to return to the Shockers for his junior campaign.

Dennis’s decision does not come to a surprise for WSU, as Gregg Marshall has been vocal about him being the next NBA player to come out of WSU. Even at certain times, Marshall would challenge Dennis to play at that next level.

“I told him at halftime, ‘Bro, you go in there, you aspire to play in the NBA, and I know that and I think you will one day, but that day will come when you start going into the basket, jumping up and trying to bite the rim, and throwing your arm through the goal, cause that’s what those dudes do,’” Marshall said after the Tulane victory this past season. “He accepted the challenge.”

The Louisiana native will have until June 15 to withdraw from the NBA draft and return the college. The last player from WSU to enter the NBA Draft early and keep his name in was Landry Shamet in 2018. Shamet was selected by the Philadelphia 76ers in the first round.

With the recent COVID-19 outbreak, it is unclear as to whether the NBA will host a combine or other workouts for the players.

This past season Dennis averaged 9.2 points and 5.0 rebounds per game on 34.8% shooting from the floor. He also shot 33.6% from three-point range.