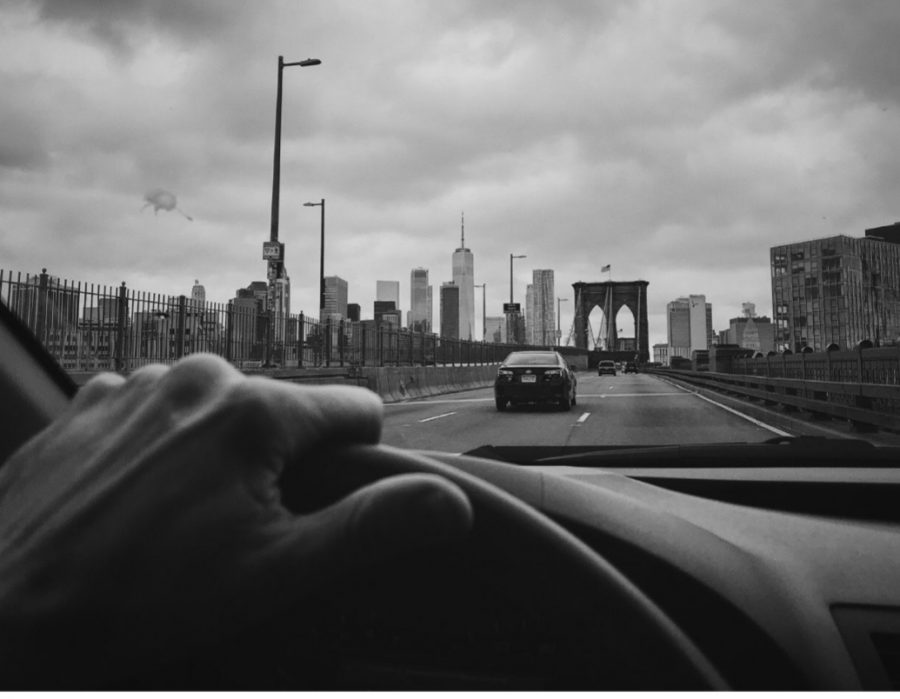 Wichita State alumnus Kevin Brown left New York City two weeks ago for Massachusetts because of COVID-19. He took this photo of a nearly empty Brooklyn Bridge as he departed the city.

New York City has been hard hit by COVID-19, putting some Wichitans and Wichita State alumni in a tough position — deciding whether to stay in NYC or leave for somewhere less affected by the novel coronavirus.

Two Elliott School of Communication graduates, Jessica Craft and Kevin Brown, ultimately decided to leave the city. Gary Fizer, who grew up in Wichita and went to high school with Craft, is still in Manhattan.

Brown, The Sunflower’s former multimedia editor, graduated from WSU in 2016. He now lives in NYC, where he is a documentary filmmaker. He said he didn’t make the decision to leave the city lightly.

“I had actually not planned on leaving. I felt originally that it was my responsibility to try and curb the spread,” Brown said.

He said he planned to remain in his Brooklyn apartment to support his roommates and family in the city. But when he was presented with an opportunity to leave two weeks ago, he made the tough decision to take it. Now he’s weathering the storm in Massachusetts.

Brown said he didn’t just get up and leave. He did it with real, albeit last-minute planning.

“In case I happen to be an undetectable carrier of this virus, I do not want to take that to another location that is potentially smaller and has a smaller health system, a smaller hospital that is probably needed for the local residents of that community,” Brown said.

When he left, Brown had already been social distancing for a few weeks, he said. He also called a friend who is an infectious disease researcher and an ER physician, who is working in the tri-state area right now.

“I asked him, you know, what do you think about me leaving New York?” Brown said.

“He actually walks me through, you know, ‘How long have you been social distancing? Have you or your roommates shown any signs in the past two, three weeks of this virus? What are your living conditions like at home?’”

Only once he had a professional opinion did Brown feel comfortable leaving the city, he said.

“I thought I would have a better chance of being safe if I leave the city and go to a place where there’s more room to spread out,” he said. “In Brooklyn, I have three roommates in my small apartment.

“I had just noticed that the city was changing really quickly. It was starting to become a really scary place to be.”

He said he sensed a shift in the city his last few days there.

“There was just a feeling of an impending apocalypse,” he said. “A menace lurking among you.”

Brown said he was acutely aware of the dire circumstances as he made his departure.

“I’m fleeing my home because of a deadly pandemic. It’s not screenwriting. This is real,” he said. “The day that I left the city, it felt like a part of me was dying.

“I felt a sense of relief being able to leave. I also feel this constant worry deep down inside of me for my family back in the city and my loved ones who are medical professionals working in ER’s. I’m constantly worried about my neighbors, for my friends who are activists out in the community who are trying to fill in the gap.”

Brown knows New Yorkers are dying. People in his community. He’s confronted by it every time he gets on his social media.

“I just wish people would see how this has impacted my city and my friends,” he said.

But he believes New Yorkers are strong. They’ve survived crises before.

“If there’s any place that knows how to make it through these things, it’s New York, but it’s terrifying. It’s a great equalizer,” Brown said.

Jessica Craft graduated from WSU in 2014. After graduation, she worked for several years at KAKE news before departing for New York. She’d never lived outside of Wichita and wanted to try something new. Now she works as a web developer.

“I’m fortunate that I can do my work from a computer,” Craft said.

She and her husband (and dog) flew back to Wichita from NYC on March 16.

After a two-week self-quarantine, they are adjusting to life in Kansas again.

“People here are kind of busybodies. They want to go out,” Craft said. “It definitely feels like people aren’t taking it seriously here.”

Coming from NYC to Wichita was a bit of a shock, she said.

“Can it really happen here? It can happen,” she said. “It only takes one person.”

She said there were a few things that happened that ultimately made her small family decide to return to Wichita and stay with her mother.

“I remember the reports coming out about New Rochelle,” she said. “Then a lot more people started wearing masks. Things started to run out at the store.

“I knew it would be a lot easier here.”

Craft said one of the hardest things about being in the city is grocery shopping. A friend back in the city said he just spent two hours waiting in line at Trader Joe’s.

“We can’t go to Sam’s (Club). It’s just a lot harder,” Craft said. “Even when you self-quarantine, you still have to go out and press the elevator, touch the front door, and walk the dog. It’s just a multistep thing.”

Craft said she feels like she made the right decision by coming back to Kansas, but she looks forward to returning to her life in the city. She and her husband have tentatively booked tickets back for April 30.

“It just depends how everything is going,” she said.

When she left NYC, Craft said she feared for the older people living in her building — people with limited mobility. She said she’s worried for everyone in NYC right now. That worrying doesn’t stop just because she’s out of the epicenter of COVID-19.

“It really hits home when I think about my parents and grandparents. It’s very serious to me,” Craft said.

“Stay home. If you go out, wear a mask. That’s what the CDC is recommending.”

Gary Fizer III was raised in Wichita and went to Northwest High School with Craft. He went to New York five years ago to pursue an acting career and now lives in Manhattan. He’s still in the city but said he’s thinking about leaving for Michigan, where his family lives.

He said it took him a while to adjust to life in the city. Before living there, his only knowledge of NYC came from “Law and Order: Special Victims Unit” and “Spiderman” movies, he said. Now he knows the city very well, having lived in multiple boroughs.

“I used to feel like people were a little bit mean. I just realized I was a little bit too nice,” Fizer said. “Here it’s kind of weird. You’re surrounded by so many people, and yet it’s just you at the same time.”

Fizer works as both an actor and a swim instructor. Neither job is conducive to working from home.

“March 14 is my birthday and it was also the opening night for a show that I was going to be in which I was really, really excited for,” he said.

It was an off-Broadway show and the performance was set pretty close to Broadway, which is a big deal in the theater district. Fizer and others working on the production envisioned it eventually being picked up by Broadway. They had already secured necessary sponsorships.

“A lot of good things were happening and I was definitely working a lot,” he said.

Everything changed between the second and third weeks of March.

“They shut down Broadway and then shut down all the restaurants,” he said. “Now everything is pretty much quiet.”

Fizer said he and his roommate are doing pretty good with food — they prepared well and shopped smart. But trying to get unemployment has thus far been fruitless.

He said his roommate has called for unemployment around 100 times — she has the call logs from her phone bills to prove it — but has never gotten through to anyone. Fizer has been trying to apply online but said the site crashes perpetually.

His biggest concern right now is trying to keep up to date with his family in Michigan.

“I spoke to my mom and dad and they told me we’ve actually lost some of our distant relatives to Coronavirus,” Fizer said.

Meanwhile, he’s not been feeling great, he said. It’s impossible to say if it’s from COVID-19, though.

“I’ve been having a little bit of a fever. I feel kind of weak,” he said. “My roommate and I have had our bit of illness. The one thing I don’t want to do is jump to the conclusion we are sick with the virus.”

For now, the two are staying put and staying away from people. Meanwhile, New York could be coming down from the apex of new case numbers but it’s hard to know if they’ve seen the worst of it. Fizer said that within the city, it’s hard to gauge if people are feeling encouraged by the possible downtick in cases.

“I can’t tell if people feel more hopeful,” he said. “I think everybody’s just saying it’s not going to last but I feel like they’re really hoping as opposed to feeling hopeful about it.”

As for the folks in Wichita, Fizer said his biggest hope is that they will take this seriously and stay home — even from church.

“People say they’re strong and they believe they’re in the church worshiping the Lord and all that stuff is great. But it’s dangerous,” he said. “I feel like church doesn’t necessarily have to be a building. I mean, I’m not trying to tell anybody how to believe in their own faith. I’m just saying people getting together is raising the possibility of spreading the virus. It’s putting more people in danger.

“People will band together,” he said. “We just have to be patient. I have to see it that way. I really believe that that’s the truth.”