Sánchez, Price-Dukes strive to rewrite the narrative of Student Government 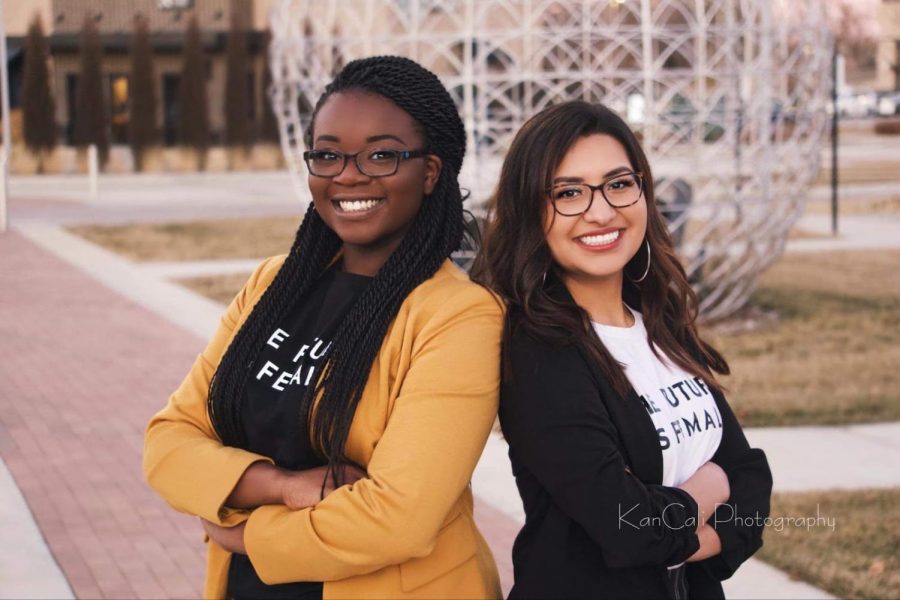 Courtney Price-Dukes and Maribel Sanchez are running for SGA vice president and president.

Courtney Price-Dukes and Maribel Sánchez say they hope to change the way students at Wichita State think about student government.

“Essentially, our platform really is to rewrite, re-energize, restructure the narrative of student government,” Sánchez said.

Sánchez and Price-Dukes are running against just one other ticket — Mackenzie Haas and Rija Khan — a stark contrast from last year’s election where four duos ran for student body president and vice president.

Price-Dukes said it’s important that students see herself and her running mate as invested and approachable.

“I’m not just thinking that the students should come to us,” she said. “We’re committed to being those people that go out to students and let them know that they do have a voice on this campus and that they deserve to be heard.”

For the past few months, the duo said they have been talking to different offices and student organizations on campus and gauging what people think about SGA.

“We found through these meetings that a lot of people don’t know what student government is,” Price-Dukes said. “They don’t have a good perception of student government and they think it’s really negative. They have this idea that all the student senators do is meaningless — that it doesn’t matter, it doesn’t influence them or impact them or affect them in any form.

“We see the value of any governing office to be very powerful.”

Sánchez said that information gave her and her running mate an idea of what to focus on and how best to speak to students on behalf of student government.

If elected, they said they hope to change that narrative about SGA. They want to see SGA as a platform to advance students’ individual causes and address the things they care about.

“The Student Government Association is huge,” Price-Dukes said. “It’s something that every student should be aware of because it is taking the student fees and allocating them, and I feel like it is every student’s right to know where their money is going.”

The duo have talked about running since their first day of freshman orientation when they met two-and-a-half years ago. They both signed up for an early orientation hosted by the Office of Diversity and Inclusion and geared towards first-generation college students. They spent four days working together there and became fast friends.

“We were both interested in advocacy in general,” Sánchez said. “We also kept up with SGA when we were prospective students — the sessions where SGA was a little bit more intense, a little bit more energized. So we talked about it and then we joked and said, ‘Oh, watch us run.’ We always made it like a funny joke. We always thought it was something that was beyond our reach because we joked about it so much.”

“It would always come up in our conversations,” Price-Dukes said. “Throughout our college career, our passion for students, WSU, and leadership have surpassed anything that we could have imagined our freshman year. Therefore, the conversation was no longer this joking matter.”

Price-Dukes said she and Sánchez have had numerous conversations about what these executive roles entail.

“It is not something that we wanted to go into blindly and without any knowledge. These roles should not be taken lightly,” she said. “It took time, discussion, and a lot of thought for us to come to the conclusion that this is truly what we wanted for ourselves and the student body.”

The two, both minorities, are running against all women.

“We love women in power,” Price-Dukes said. “Women are just as passionate as anyone and they are capable of doing great work for the student body.”

Price-Dukes and Sánchez have posed in campaign shirts that read “the future is female.” While the two said they don’t disregard men in any way, they do want to encourage women to run for office.

SGA voting is open until Wednesday. To vote, check your myWSU email for the link.