Muma: Tuition hike, furloughs on the table for WSU employees in the wake of COVID-19 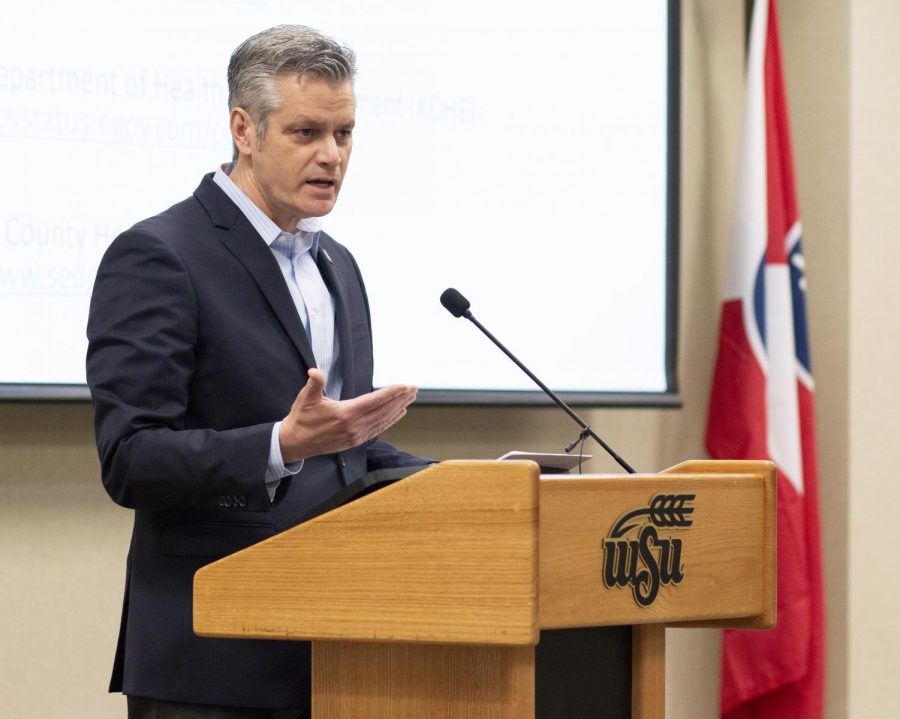 Provost Rick Muma speaks during the last weekly briefing of the semester at the Rhatigan Student Center on Thursday, March 19, 2020.

With Wichita State anticipating a multi-million-dollar revenue loss in the wake of COVID-19, Provost Rick Muma acknowledged Monday that the university may resort to raising tuition and furloughing employees as part of a “multifaceted approach” to plugging the revenue gap.

“Just looking at our projections for enrollment, it looks like that we’re going to have about a $6.5 million shortfall just on tuition revenue side,” Muma said at the Faculty Senate’s virtual meeting.

That figure doesn’t account for possible shortfalls in the State General Fund, which WSU also pulls money from.

Officials at Kansas State have said the school’s virus-related losses could surpass their original $22 to $23 million estimate. WSU officials told The Sunflower no overarching estimate of university losses currently exists, but the school is looking into ways to plug the gap.

“Tuition increase is on the table,” Muma said. “Probably, if we were to do that, it would be around a 2.5% increase — somewhere around that range. Again, that’s problematic, given that many people are struggling already, including our students, and any increase is going to be a difficult situation.”

WSU is set to receive nearly $8.8 million from the CARES Act, a $6 billion emergency grant for universities. Half of that money must be used as emergency aid for students.

The university has already announced hiring freezes and other cost-cutting measures. Muma said officials are trying to determine “a fair amount” of Fiscal Year 2020 funds to sweep back from each department for next year.

But even with that measure, benefits-eligible WSU employees may be forced to take time off without pay.

“I do want to tell you, there is conversations about furloughs as opposed to pay cuts,” Muma told senators. “Although the net is the same, but a furlough doesn’t take away your base salary amount. It just forces a certain amount of time that you take off without pay, but your base is still there for the next year.”

He said the university will do everything it can to keep from laying current employees off, but even faculty could be put on furlough.

“If you’re going to look at a way to be fair across the board, everybody would be looked at to furlough,” Muma said.

According to Inside Higher Ed, a number of colleges and universities across the country have already implemented layoffs and furloughs. These measures seem to have been limited to nonfaculty so far.

Muma said basic benefits such as healthcare, sick time, and vacation time would not be affected by furloughs, but he could not make the same guarantee for retirement benefits.

“We did talk about retirement, and since that’s a percent that’s allocated through your retirement based on your salary, it could be reduced by the amount of time that you’re put on furlough,” Muma said. “Again, we need to make a decision on that and have more conversations about that. I’m not saying that that’s going to happen or not going to happen.”