‘The way you’ve imagined it — it’s just not going to end like that’: Class of 2020 prepares for an uncertain future 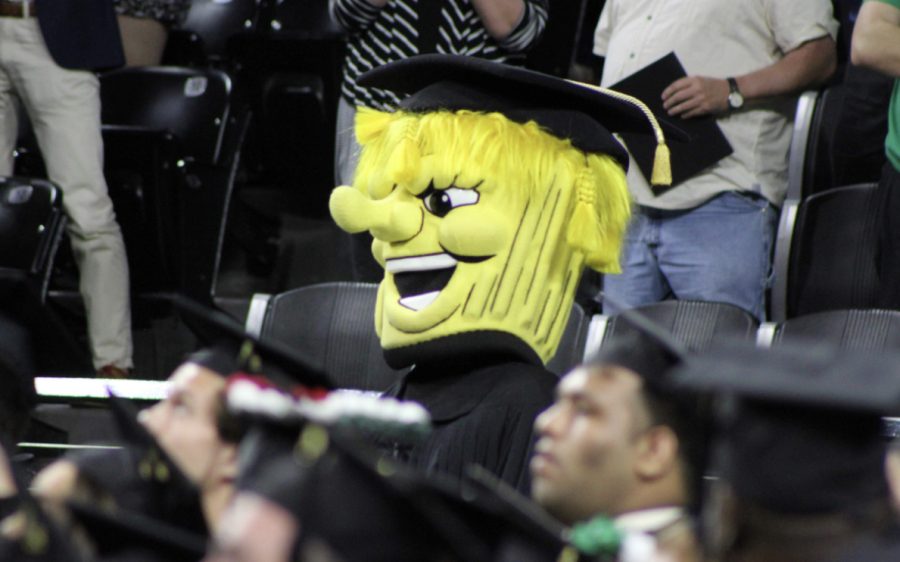 WuShock wears a cap and gown at May 2019's LAS commencement ceremony.

Graduating college means embracing a level of uncertainty, but with the economy in recession and the workforce reeling from a global pandemic, the path forward seems uniquely daunting for class of 2020 graduates.

Many students set to graduate next month without the pomp and circumstance of a traditional commencement ceremony will be confronted by both weakened job prospects and looming student debt obligations.

Xan Mattek, a Wichita State musical theatre major, planned to move to New York City for the summer to try out living in the big city. COVID-19 put that dream on hold indefinitely.

“I don’t know when it will be safe to move into these cities where the job market is way better than Wichita,” Mattek said.

There’s a good chance the summer stock theatres she auditioned for won’t even be operational this summer.

Meanwhile, she’s out of a serving job at Red Rock Canyon Grill, and with student productions canceled for the rest of the semester, she has no playbills to design as student assistant for the School of Performing Arts.

“Like three-fourths of my job was just totally — I can’t do it anymore,” Mattek said.

Human resources management senior Elle Kabler works part-time as a talent acquisition coordinator for Heartland Coca-Cola. She said she feels blessed to have kept her job when so many people have been laid off, but it’s not the full-time position she envisioned having after graduation.

“Being a senior right now, I’m kind of looking for those opportunities and looking at full-time employment and seeing, well, ‘In May, where do I want to be?’ Is that remote? Is that relocating? Is that where I am now?” Kabler said.

“Do I apply for other jobs? Not because I don’t feel secure in my job but because when I have an undergrad degree, I’d like a full-time position.”

Whereas many companies are laying off employees, Kabler said Coke is actually taking on more. As a talent acquisition coordinator, she gets to see first-hand how many laid-off workers are looking for new positions.

“It’s definitely from a recruiting standpoint, interesting to see that, and then it also makes me anxious because you’re definitely entering into a very uncertain job market,” Kabler said.

Jeremy Hill, director of WSU’s Center for Economic Development and Business Research, said workers without college degrees will be most impacted by the recession.

“The jobs today that are least impacted tend to move up on the education scale,” Hill said.

“The more education you have, the more likely you can work from home.”

He said jobs in data analytics and technology are in high demand right now. But the positions new graduates would usually apply for may not be available for some time.

His advice for new graduates is to find ways to build their human capital.

“Getting experience during this time is important, or more education is important, because the jobs have been put on hold right now,” Hill said.

“We kind of transitioned to a remote workplace pretty easily.”

He said he feels lucky to stick it out in D.C. and finish his internship while responses to his law school applications trickle in. Some schools have been much more responsive to applicants than others in these uncertain times, he said.

“That kind of helps color a lot of my decisions — who’s been proactive about it? Who’s been responsive to it? Who’s still concerned?” Wingert said.

He said he’s grateful that his postgrad plans haven’t been derailed by the pandemic.

“If I was trying to take a gap year or if I was trying to like, find a job or work for experience and then go to grad school later, this would be weighing on me a little more heavily,” Wingert said. “I kind of already understand what I’m doing, and as I see it, it’s not affecting it as majorly as it’s affecting some other people and their career aspirations.”

Hill said recessions are usually cyclical — people get laid off and eventually rehired. But some jobs don’t come back. That was the case a decade ago during the Great Recession.

“The [jobs] we did lose were no technology or low-technology,” Hill said.

“There was a lack of innovation during the 2007-2008 recession. We just didn’t really come out with a lot of new ideas.”

He said new graduates have a window of opportunity to generate new ideas and products that can solve immediate problems society is grappling with.

“If you make a risk now of creating a new business right now to solve whatever problem that’s in front of them, that will change the trajectory,” Hill said. “We’ve had such a disruption from coronavirus. The global market, the Kansas market, here, Wichita — are all looking for new innovations to make working from home easier down the road, because we’re going to work from home more. We need those innovations today.”

But the class of 2020 still has to come to terms with an unceremonious transition from schooling into whatever comes next.

“The way that you thought your schooling was going to end for like, your whole life — the way you’ve imagined it — it’s just not going to end like that,” Mattek said.

“My classes at WSU prepared me very well for the real world — going into a world that was going to accept me, and I was ready to accept it. And now it’s just not. It’s not quite ready.”