New student body president, VP excited to get to work 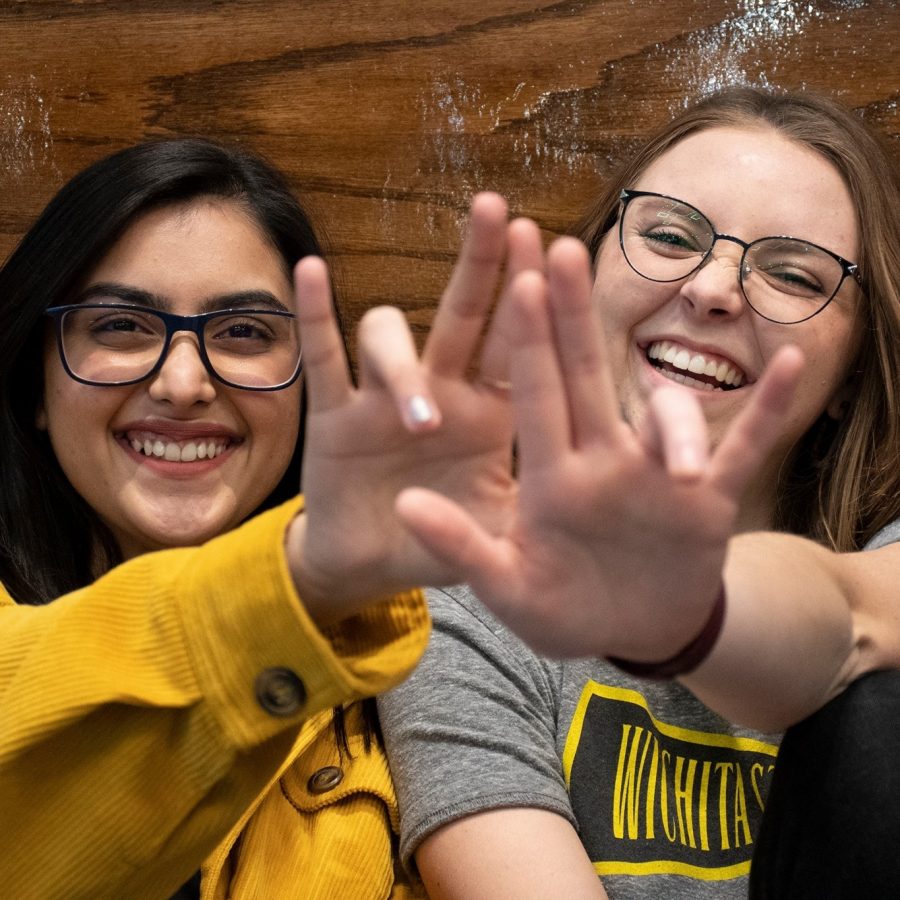 Courtesy of Empowering Shockers, Together.

Khan said winning the election was a surreal experience, and that she “teared up a little.”

“It was this moment of disbelief,” she said.

“I’m still speechless and I’m very excited and honored to be in this role.”

“It was definitely an emotional roller coaster for the past couple of days [after the election],” she said. “At the end of it all, I’m just excited to get to work and ready to get out there and start meeting with people.”

Haas said she’s mainly excited about giving back to Wichita State, which she said has provided her many opportunities.

“Wichita State has given me many opportunities so far in my collegiate career, and I just want to give that back to the student body and to the university in general,” Haas said. “This is a way for me to take a leadership position and really give to Wichita State as it has given to me.”

Khan and Haas have both been involved in SGA since they were freshman.

Khan’s said her love for politics led her to join.

“In high school, I was a part of debate and forensics, so I just kind of fell in love with just politics in general and I saw how that system could be used for good,” Khan said. “When I came to Wichita State, I knew about [SGA] . . . so I automatically applied for it.”

Khan began as a freshman senator. She said her first year in SGA was an important one.

“It was one of the toughest times in SGA,” Khan said. “I went through all those tough times with everyone else. It really helped me understand and it really helped me shape my point of view of our university.”

In Khan’s second year at SGA, she was elected as a Liberal Arts and Sciences senator and got the chance to teach new senators the ins and outs of the senate. After that, she was appointed as the first chair of the ways and means committee.

“I became the first ways and means chair, which is a new committee,” Khan said. “We all learned a lot. I learned how to juggle my role between a chair position and a senator position.”

Haas said that from the second she stepped on campus, she started looking for opportunities to get involved. After getting involved with her sorority, she said her involvement on campus had a “snowball” effect.

Like Khan, she said her love for politics brought her to SGA.

“I realized I had a strong passion for politics and I figured if I was going to be involved in anything political, I should start and test the waters . . . in SGA,” Haas said. “I applied for an election commissioner position in November of my freshman year, and I got to see the behind the scenes of the election and how that works at a collegiate level.”

After her time as an election commissioner, Haas decided she wanted to apply her communications major to her next role in SGA. She then applied for the director of public relations position for the 62nd session.

“From there, I started having conversations with people. I saw that there’s a lot more work to be done,” Haas said. “There’s a lot of things on campus that I think could be more beneficial to students or more efficient or . . .  just better all the way around.”

Haas said she got the idea to run for vice president last December. She pitched the idea of running together to Khan.

“I actually went to her and I said that I wanted to run and that I thought we would be really good together,” Haas said. “We just started talking through some of the ideas I had, some of the ideas she had, and how they kind of aligned. And then at that point, we started working together more often and talking to each other and bouncing ideas off of each other.”

Haas said their personalities compliment each other well.

“I’m more of a dreamer than she is,” Haas said. “She’s very realistic and I’m very up in the clouds sometimes, so she brings me down to earth and I make her think a little bit more.”

“She completes some of the things I can’t complete about myself at times,” Khan said. “[If I get] super critical about things, she’ll be the optimistic one. She’s gonna be like, ‘Hey, there’s also this. Let’s give this a try.’ And when we would, it would always turn out to be good.”

Khan said she has always aspired to be a leader.

“Since I was a freshman, I have actually had that goal to represent something on big scales,” she said.

Khan, who will be WSU’s first Muslim student body president, said she hopes she will be able to pave the way for future generations ahead of her.

“I’ve never had the opportunity to look near me and say, ‘Wow, that woman is a Muslim and she’s fierce, and she’s able to be on such a big platform,’” Khan said.

She said she hopes her presidency will “humanize” Muslims.

“A Muslim president is still a human. And I don’t think I’m any different than anyone else who has served in these roles,” Khan said.

“I guess it kind of humanizes Muslims on this campus and it shows how inclusive our campus can be . . . If we put aside our differences . . . we can work together, is what it’s going to show.”

Khan said her ultimate mission is to represent Shockers to the best of her ability.

“All of it combined it’s big pressure, but I’m ready,” she said.

“I will always advocate for people the way I have always wanted to be advocated for.”

Khan and Haas said they are both aware of the trials students are facing due to the COVID-19 pandemic, and are ready to help them in every way they can.

“I think communication is huge between administration and the student body, but also between Rija and I and just ensuring that everybody is clearly communicating and that all the big decisions are being made with students in the room, or in the Zoom meetings anyways,” Haas said. “Just ensuring that student voices are being heard even though we’re not on campus [is important].”

Khan said she encourages all students to prioritize their mental health during this uncertain time.

“If you ever need any help, reach out to [Counseling and Prevention Services],” she said.

“It is always good to ask for help. Mackenzie and I are here for you, Shockers.”