“It’s just a great feeling”: WSU softball seniors reflect on what it means to get another chance at their senior season 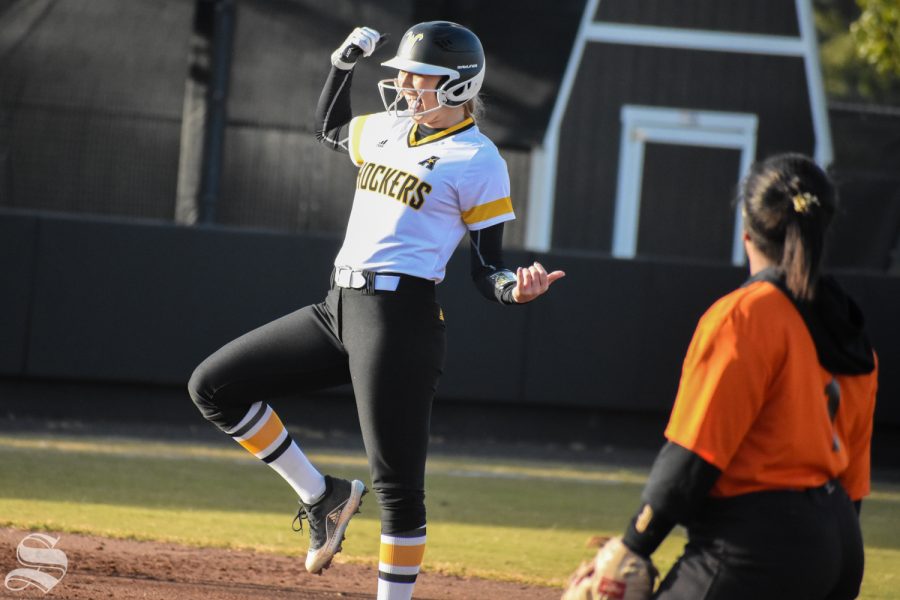 Wichita State senior Bailey Lange celebrates after scoring a double during the third inning of the game against Cowley Community College. The Shockers won 21-1.

The Wichita State softball team saw their season end early about a month ago due to the spread of COVID-19. For its three seniors – Ryleigh Buck, Bailey Lange and Madison Perrigan – it meant the possibility of their careers being cut short without playing a single home game in their final season.

For the three seniors, hearing that the NCAA would allow them a “fifth season” was very exciting news, as they look to finish out their careers in a much more positive fashion.

“I think we were all excited,” Buck said of the NCAA’s decision. “Coach (Bredbenner) was very optimistic about us getting our year back so, I think she tried to keep us in a positive state of mind. So I think she did a really good job with that. But whenever it got closer and closer to the actual day that they were making the actual decision, it was hard not to worry a little bit.”

“But when we were told we would get another year back, I think we were just excited. It’s a whole another year to play whenever something was taken from you so quickly. It’s just a great feeling.”

In the case of senior pitcher and outfielder Bailey Lange, the 2019 season was supposed to be her final season, but after an ankle injury early on in the season, she was given a medical redshirt to allow her to come back to WSU for the 2020 season. So, Lange is looking forward to coming back in hopes of playing a full season.

“For me, I broke my ankle last year so I had my season cut short and it was about the same amount of games as we played this year,” Lange said. “So just trying to finish a season would be nice before my career is over.”

WSU’s softball program faced similar circumstances a year ago as the 2019 AAC Tournament was cut short due to weather which ended WSU’s season. For the seniors, this opportunity helps to give them some closure after seeing how last year’s seniors had their careers end prematurely.

“It’s kind of a sense of closure to have that last game and finish your year,” Buck said. “Last year for our seniors we saw them not get to play their last game because their season was ended early and that was kind of what happened to us.”

For the group, collectively, it was a relatively easy decision to come back, even with their future up in the air.

“Ryleigh and (Madison) were already planning on coming back to finish their degrees for their fifth year and I didn’t really have any plans for grad school or anything yet so, I think it was easy for all of us to make that decision,” Lange said.

With the premature ending to a season that saw the Shockers go 11-16, the seniors feel they can learn from the start of the season from a leadership perspective. By knowing what was productive and what was not, it can help the leadership be more productive the second time around.

“It’s going to be really good for us because I felt like we were already a pretty good group of seniors that communicate well with each other and know how to lead our team and it’s going to be even easier next year because we’ve already had a trial run,” Perrigan said. “So, we know what to do, what not to do and learn from past mistakes and just know how to handle things better moving forward.”

With the pandemic and various stay-at-home orders across the country, it has made staying in shape more difficult. In the cases of Lange and Buck, they are both still in Wichita and work out together 3-4 times a week.

For Perrigan, as she is away from Wichita, she has relied on various workouts and running to stay in shape for the upcoming season.

“Ryleigh’s boyfriend posts workouts on Facebook and I’ll do that or I’ll do one of Hannah’s strength workouts that she’s sent us,” she said. “Just doing a lot of running which I don’t normally do.”

From Buck’s perspective, she sees the hardest part of the outbreak is finding ways to incorporate the softball aspects into the workouts especially with everything being closed.

“It’s easy to do the working out part and staying in shape,” she said. “Definitely the hardest thing is the softball aspect with everything being closed. We can hit on a tee, we can play catch at home but just kind of working out and staying in shape is pretty easy for us. It’s much harder being away from our team and not being with everybody to be able to do softball stuff or seeing live pitching.”

“Getting live reps is the hard thing to do right now. ”