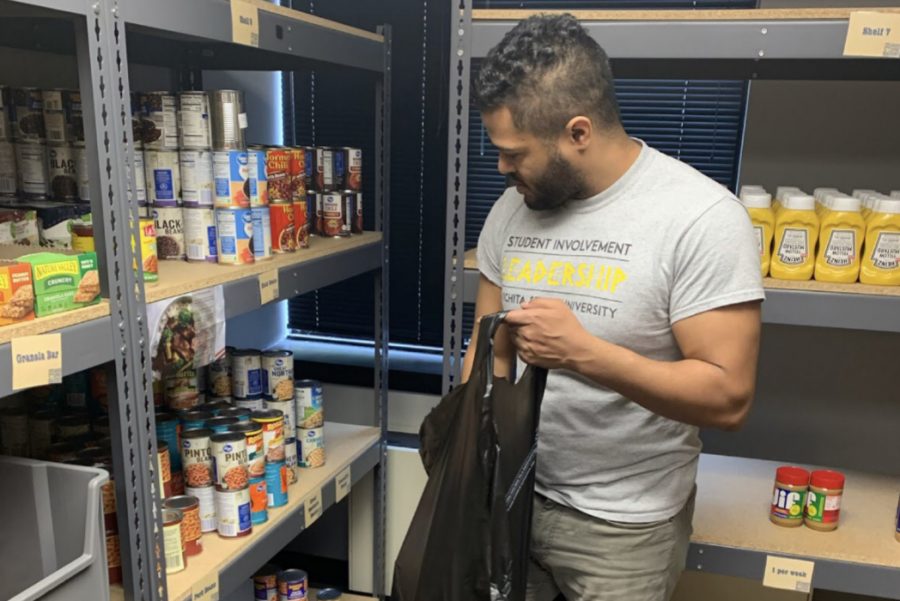 Collin Munson loads up food for delivery in the Shocker Support Locker.

At the beginning of the semester, Collin Munson and Gabriel Fonseca had no idea they’d soon be in charge of organizing and delivering curbside service to Shockers in need.

Like every other organization at Wichita State, the Shocker Support Locker had to pivot in the face of COVID-19, but stopping the service all together wasn’t an option, especially when unemployment is rising and grocery shopping has become more taxing due to the pandemic.

“We’re a band-aid to a much larger issue,” said Fonseca, assistant director of Student Involvement. “We operate as a temporary relief for food insecurity and basic needs, and provide that service to our students and staff.”

Fonseca and Munson, a graduate student, normally have a team of six people working to keep the locker stocked and operational each week.

“It’s a lot easier when we have four other students that can help us,” Fonseca said.

Since the end of March, the operations have fallen solely to Munson and Fonseca.

“Usually, my role is pretty much monitoring everything and making sure the locker runs well, monitoring my student assistants, and noticing if we’re running low on products,” said Munson, who is working on a Master’s in Business Administration.

The work must go on, even as student assistants have had to leave campus.

“He and I, we’re still dealing with things there. I like to say, I think we’re crushing it, and still providing a useful service for our community as well,” Fonseca said.

Since spring break, the support locker has adopted an online ordering platform, which allows users to choose the items they need ahead of time. Curbside pickup allows people to get their goods while following social distancing practices.

“I get an order, I email them, I get the list of items they need, I pull all items, bag them all up, and I just put it up to the curb,” Munson said. “The first couple of days was really tough because I was trying to figure out, ‘Was that that person’s order or someone else’s?’ Now I got a good rhythm of it, it’s coming easier.”

After an order comes in, Munson or Fonseca call to arrange a pickup time. During pick-up, users can stay in their cars. Munson packages the items and carries them to the curb after the recipient arrives and places a call.

Pickups take place from 1-4 p.m. on Wednesday and Friday afternoons at lot 15 behind Grace Wilkie Hall.

The only eligibility requirement is that users must be currently enrolled students or currently employed faculty or staff at WSU. Generally, a visitor may take up to 25 items from the locker each week.

“I would say we’re probably a lot more lenient than in normal time, mainly because we’re only open for two days a week,” Fonseca said. “We are working with students if they need a little bit more.”

As for keeping the locker stocked, Fonseca said they’ve coordinated with Chartwells Catering on orders. They’ve been working with the WSU Foundation to secure additional dollars to help purchase items for the locker, he said. The university police department also hosted a drive for the locker.

“We’ve kind of expanded our offerings a little bit, so we tried to really pick up on baby products,” Fonseca said. “We know that that’s been something that people have been struggling to get in stores. We purchased toilet paper because we know that that’s a hot commodity right now, plus additional resources that some of our people might need,.”

One concern is how to help out-of-state and international students stuck on campus who may be suffering from food insecurity.

“Some of these people are international students, and with all this crisis going on, and students are now cut off from their families, you know, they can’t go home and they’re stuck here,” Munson said.

There are students in need who aren’t in the area right now. They left Wichita after campus largely shut down in March. How can the locker reach them?

“We are trying some alternative methods to be able to get to serve the students that we typically serve again, and some of those are out-of-state and international students,” Fonseca said. “We had a couple of students that have reached out to us that were out-of-state students who utilize the locker, and we’re working on trying to purchase e-gift cards that we would be able to send them that they can utilize at a grocery store nearby.”

He said they also have some gift cards that can be used locally if a student needs something the locker doesn’t currently have.

Munson said he was worried at first that people would be hesitant to place orders online or have someone else package the items for them. Still, the response to the online ordering and curbside pickups has been positive, he said.

The students that come by or certain faculty and staff that come by and pick up food seem to be adjusting very well, Munson said.

“For the most part, they’re very relieved that we’re still open,” Munson said. “Everybody has been really happy.”