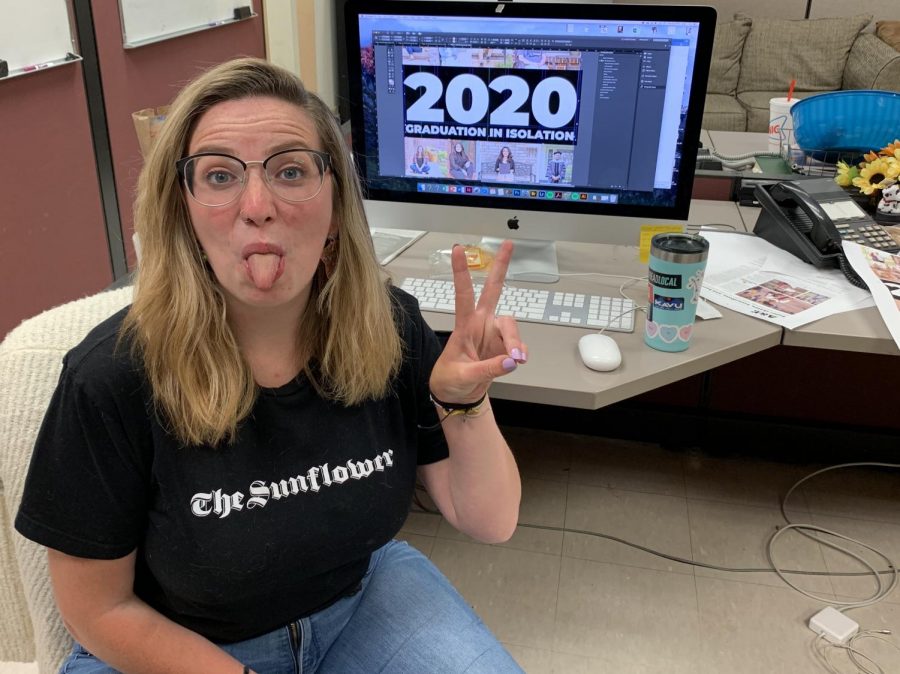 Editor in Chief Kylie Cameron works on the last print issue of the 2019-20 school year.

Oftentimes, we think we know what we want in life. It’s all planned out in our head. We know exactly what classes we need to take for the next four to six years, what internships we want, and our dream job or graduate school after it’s all said and done.

And then it all goes flying out the window.

I think that’s the best way to describe college — and even these past few months.

That’s a good thing. Having everything planned out doesn’t build character.

I accidentally became a sports reporter for The Sunflower my freshman year (long story), which started my career at the paper. Since then, I’ve done just about everything, even advertising, another thing that just happened by chance.

It’s hard to find the right words for this column. I thought I had a while longer to think about this, but my college journalism career has ended just as abruptly as it started.

I’ll miss the newsroom, the laughs with my coworkers and friends — even the tears.

To be honest, this paper and the people on it have saved me more times than I am willing to admit, especially in the past year — balancing anxiety and the most stressful job of being a college newspaper editor is not easy.

But I don’t want this to be sad. This paper has given me the best friends I could ask for and the best experiences.

To Matthew Kelly and Madeline Deabler: wow. We made it. Having you two with me all four years has been incredible. I can’t ask for better friends and I can’t thank you enough for putting up with me. Kirby’s?

To Amy DeVault: I don’t even know where to begin. I know I’ll be seeing you around still, but writing this is still so hard. You’ve been the best mentor I could have. You’re right, I don’t know everything (even though freshman Kylie would say otherwise), and I still have so much more I can learn from you.

To The Sunflower 2017-18 crew: What a year that was. Each and every one of you inspired me whether you knew it or not. I still think back on that time and the difficult circumstances we were under whenever I feel like I can’t make it through.

To Neal Allen: Who knew taking FY 2016 Elections would quite literally change my life? I can’t thank you and the political science department enough for taking a chance on me and actually seeing something in me that I didn’t.

To my friends and family: Thank you for helping me navigate this past year. Between the lowest I had ever felt in my life, to the highest, you’ve helped me through it all.

To next year’s Sunflower crew: You’re going to kill it. I admit, I was nervous at first with all of the seniors leaving, but I know we couldn’t have left this paper in better hands. Try to expect the unexpected. Each year gets crazier than the last.

Okay, this is actually the last thing I’d like to say: Don’t be afraid to back down when someone questions your integrity — I think you all know who this is about.