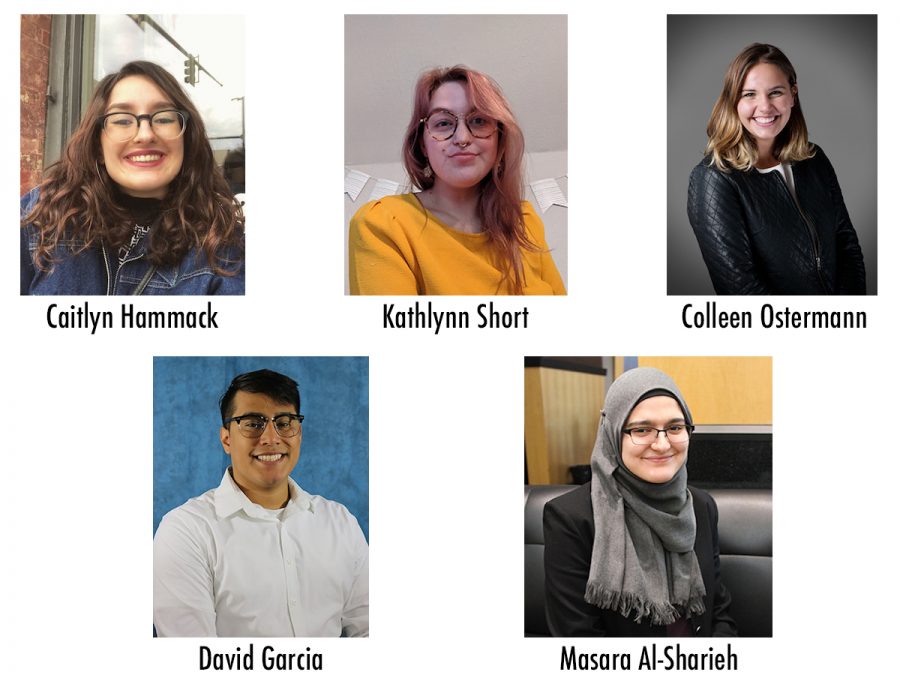 The Student Senate approved all five of her cabinet picks at the first two SGA meetings under her leadership in May.

Here’s a closer look at the students who will help lead the executive branch.


Caitlyn Hammack, student advocate
Caitlyn Hammack is a senior majoring in social work and minoring in women’s studies and psychology. She is vice president of the Ambassadors for Diversity and Inclusion and plans to go to law school after graduation.

She said she applied to be the student advocate because it lines up with her career goals.

“There’s a lot of different roles that a social worker can have and advocate is my favorite one — and lowkey is the one I think I’m the best at, too,” Hammack said.

Because of the stress that the COVID-19 pandemic causes students, Hammack said it’s all the more important for them to have an advocate.

“I think that college and our young adult time right now is a really weird and hard and scary time for a lot of people,” Hammack said.


Kathlynn Short, chief of staff
Kathlynn Short is a senior studying political science and strategic communications, while seeking a minor in women’s studies.

Short worked at the end of last semester as SGA’s chief of operations, which has since transitioned to chief of staff. Short was also an out-of-state senator for the 61st session.

Short said her experience as a senator prepared her to be chief of staff.


Colleen Ostermann, treasurer
Colleen Ostermann was last year’s treasurer as well. Ostermann recently applied to the business school in hopes to work towards her Master of Business Administration next fall. She said she’s had a number of experiences in the world of finance, including an internship with Kansas Sen. Caryn Tyson, chairwoman of the Assessment and Taxation Committee.

Ostermann said she wanted to be treasurer again this year because she felt there’s more work to be done.

“It’s been difficult and grueling at times, but I truly have loved my position here,” Ostermann said.

Khan described Ostermann as someone who could be consistent in her work as treasurer.

“I want someone in that position that is constant,” Khan said. “And she already has relationships built up with administration [and] she knows the process.”

Garcia said his involvement on campus shows how passionate he is about WSU students. He’s president of the Multicultural Greek Council, an ambassador for diversity and inclusion, and a member of the Hispanic American Leadership Organization (HALO). Garcia wants a career in public relations after he graduates.

“I feel [that] student government association is the next big step for me,” Garcia said. “It is a great way for. . . students to advocate for our student body and ensure that our voices [are] heard [by the] administration. I think this is a perfect place to merge my passion for the students here at Wichita State with my career aspirations.”

Al-Sharieh is majoring in collaborative design with an emphasis in animation filmmaking and minoring in communications. She is an ambassador for the Student Ambassador Society and works with a nonprofit organization that creates multimedia projects about substance abuse and mental health issues.

“One of the reasons why I applied for this position was because I felt like that SGA has a lot more potential to reach out to students and help them understand more about SGA and what it is,” Al-Sharieh said.

Al-Sharieh said one of her goals is to create more videos to reach out to students.