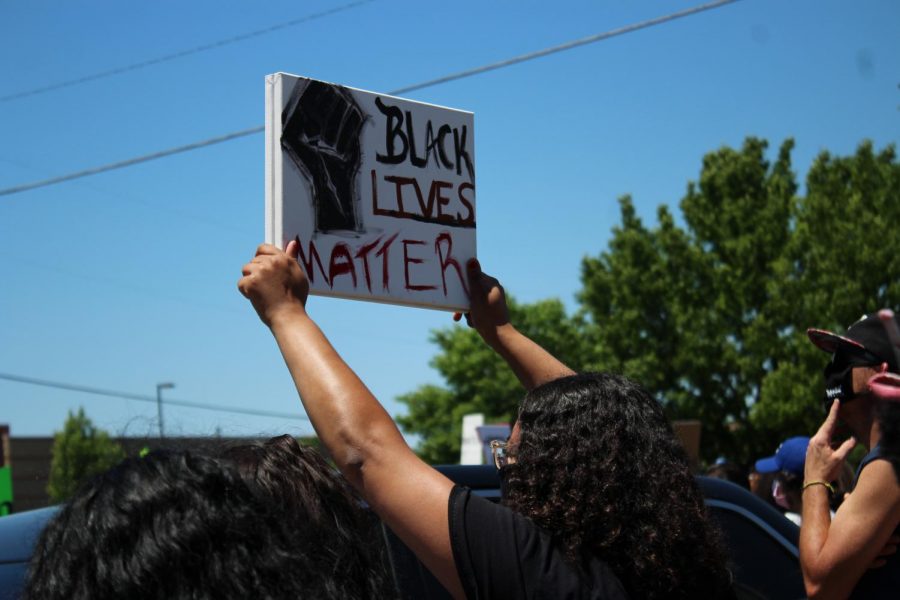 A protester holds a Black Lives Matter sign on Saturday during a protest against police brutality outside of a Wichita Police Department station near Hillside and 21st.

An estimated 2,000 protesters gathered Saturday outside of the Wichita Police Department station on 21st Street near Wichita State’s main campus, calling for justice for George Floyd — a Black man who died in Minneapolis after a police officer pinned him to the ground with a knee on his neck.

Demonstrators, many donning masks, carried signs supporting the Black Lives Matter movement and calling for an end to police brutality. Other signs read “I Can’t Breathe,” quoting Floyd’s pleas as former Minneapolis officer Derek Chauvin kneeled on his neck for about nine minutes during an arrest on Monday.

The peaceful rally was just one in a string of demonstrations across the United States after video of the incident went viral this week, including in major cities like Atlanta and Louisville. Some of the protests turned chaotic — particularly in Minneapolis and St. Paul — leading to violence between police and protesters, fires, looting and structural damage.

Chauvin, a 44-year-old white man, was arrested Friday and charged with third-degree murder and manslaughter in Floyd’s death. The other three officers on scene during the incident have not been charged.

Protests continued for a fourth night on Friday after the charges were announced, and Minnesota Governor authorized “full mobilization” of the National Guard.

The rally outside the WPD station lasted around three hours, beginning at 1 p.m. Saturday. Protesters chanted Floyd’s name, “let the people speak” and more during and between speaker testimonies. Passing drivers honked their car horns.

Lavonta Williams, former vice mayor of Wichita and the first African-American woman to hold the position, attended the rally as a volunteer for the NAACP. She said she was proud of Wichitans for speaking up about racial injustice.

Williams, whose son works as a police officer, said she hopes the community will be able to have “better conversation” with police and city leadership after the demonstration.

Wichita Police Chief Gordon Ramsay, formerly the president of the Minnesota Chiefs of Police Association, described Floyd’s death as murder on Thursday in a tweet.

Many of the protesters parked on WSU’s campus and marched to the police station. The university also supplied masks and water bottles at no charge to protesters.

Alec Tucker, who completed her bachelor’s degree at Wichita State this month, said she wanted to help draw attention to racially unjust practices.

“I think it went really well, just because everybody stayed very peaceful and nonviolent, and everybody just really came together,” Tucker said. “Everyone was really positive and kind to each other because we’re all there for the same reason.”

Tucker said she hopes people continue to fight against racial injustice, even if the public’s reaction to Floyd’s death settles down.

“We just need to keep a conversation alive,” she said, “so we don’t only have conversations when something terrible happens.”

“Wichitans of all races, faiths and backgrounds can come together in solidarity over the unquestioned value of respect and love for our African American Community,” reads the letter signed by WSU President Jay Golden and Marché Fleming-Randle, vice president of diversity and community engagement.

The rally near WSU was one of multiple demonstrations this weekend in Wichita, including a “cancel rent” vehicle caravan and a Black Lives Matter march from Century II to a different police station.