OPINION: My fear is rational 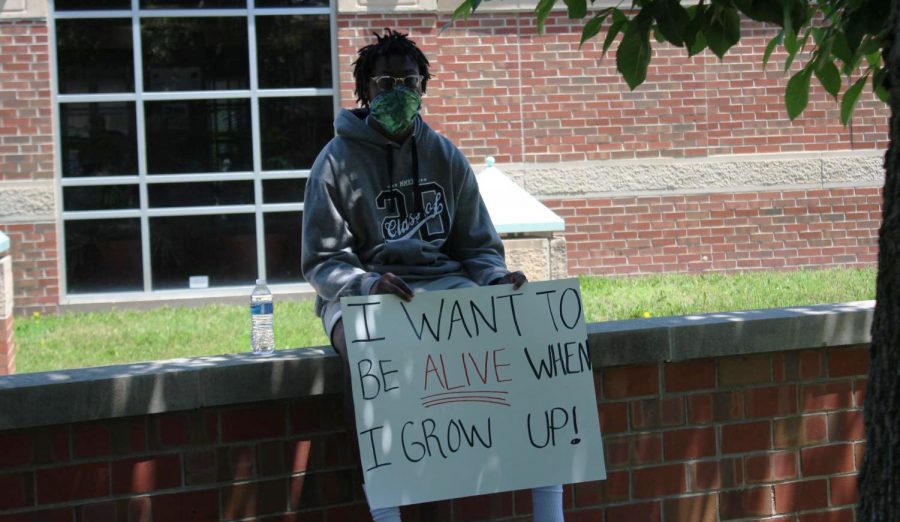 A demonstrator holds a sign during a protest on Saturday outside of the Wichita police station near WSU.

That’s how much time elapsed before I finally reopened Twitter after finding out about the horrific murder of George Floyd by former Minnesota police officer Derek Chauvin.

I couldn’t do it. I couldn’t sit down and deal with another conversation about a Black person being murdered again. I couldn’t muster the strength to dodge the video or any other tweet. I felt sick.

Unfortunately, this sick feeling was something I felt less than a month ago for Ahmaud Arbery and Breonna Taylor. It’s frightening.

As a Black person living in the United States, I live with a cloud of fear behind my back. Every day, living as a Black person is also preparing for a battle. A battle that Black people, myself included, have constant nightmares about.

My first nightmare happened around the age of 11. I was living at home in Sint Maarten, a predominantly Black island nation. Instead of police brutality, I saw an invasion in this nightmare. In this nightmare, the Dutch sent troops to take back “what was theirs.”I had to fight for my life, for my freedom.

My most recent nightmare happened this weekend. I twisted and turned, fearing for the lives of people around me. It made me realise that the fear of being slain, especially at the hands of this racist justice system, has become a crucial part of my identity.

On May 26th 2020, protesters took to the streets of Minneapolis, championing justice for George Floyd and other people who were abused by Chauvin. Police met the mostly black protesters with riot gear, tear gas, rubber bullets and other forms of combative crowd control.

Organizers and members of the black community criticized this response as escalatory and racially biased. Just a few weeks ago, when predominantly white crowds were protesting against stay-at-home orders with assault rifles strapped on their backs, they weren’t met with these tactics.

Riots have spread across the country and particularly in Minneapolis, a visible repeat of Ferguson in 2014. Some (white) liberals are calling for things to cool down because “everyone has families”, “every life matters”, “think about the good ones.”

But it’s too late.

When slavery was abolished in this country, the police system was used to target these new “free” people and lock them up. Throughout the last two centuries, the police has been a major tool to continuously in exploiting Black bodies for the advancement of US interests.

The police have also been used to silence those who were a little too loud. They made sure to give prominent and local civil rights leaders hell. Organizers of major 21st century protests have popped up dead. The system was never made to serve and protect us; it was made to oppress and destroy.

For hundreds of years, our lives have been seen as valueless.  They say, “present your issues to stakeholders, ask the important questions and we will see what happens.” But how many times can you ask these questions? Rapper, actor and poet Tupac Shakur express this sentiment perfectly in a 1994 interview where he used the analogy of food in a hotel.

“If I know that in this hotel room that they have food every day, and I’m knocking on the door every day to eat, and they tell me … they open the door and let me see the party, let me see like they’re throwing salami all over the house, they’re just like throwing food around, but they’re telling me there’s no food in there,” he said. “You know what I’m saying? Every day.”

He continues this analogy, acknowledging that over time, people are going to start getting more hungry and restless, demanding some food. Tupac ends it with this powerful note:

“After a year, it’s just like, you know what I’m saying … (rapping) I’m picking the lock, coming through the door blasting. You know what I’m saying? It’s like you hungry, you reached your level, you don’t want it anymore. We asked ten years ago,” Shakur said. “We was asking with the (Black) Panthers, we was asking with them, you know, the Civil Rights Movement … Now those people that were asking, they’re all dead and in jail. So now what do you think we’re gonna do … ask?”

For years we’ve been asking for some reform, for some justice, for some proper freedom. Instead of answering with the rights and justice we demand, we get: “Oh hey, here is a Black politician, a Black millionaire, a Black police, a Black judge.” The riots aren’t some display of ignorance and mass destruction. The riots are a display of anger, distrust and fear.

So if your first response to the demonstrations is “let’s also think about …” or “yes they were wrong, but …” or “not all cops are bad” or any other statement along those lines, you are a part of the problem.

If you are quick to say “oh that’s just the French being French” in regards to yellowjacket protests in France or yell “Yassssss Queen” (which is African American Vernacular by the way) to pro-Democracy protests in Hong Kong, but have an issue with the riots in Minneapolis, you are a part of the problem.

These dismissive thoughts continue to cycle and do not even start to address the situation at hand. It makes it seem that my fear, the fear that most Black people live with, is irrational.

My fear is rational. Being afraid to throw away the trash or take a trip downtown is rational.

Worrying about my family, my friends or a stranger I’ve probably never seen in my entire life is rational.

The fear to take a jog, get some candy, or even trying to breathe is rational.

The anger, the pain, the joy, the happiness, the sadness; every single emotion I feel throughout my Black body is rational.

We’ve made it this far trying to survive, and now as the anger builds up and people are more understanding of their rights and feelings, there will be less singing Kumbaya.

A side note to the media: make sure to obscure the faces of protesters or focus on signs, large groups and people with masks. This is to help protect the identity of organizers and demonstrators, as many end up arrested or killed.

If you want to help in the fight for Black rights, support one of the following grassroots organizations in Minnesota and across the United States: