Candlelight vigil planned at WSU for victims of police brutality 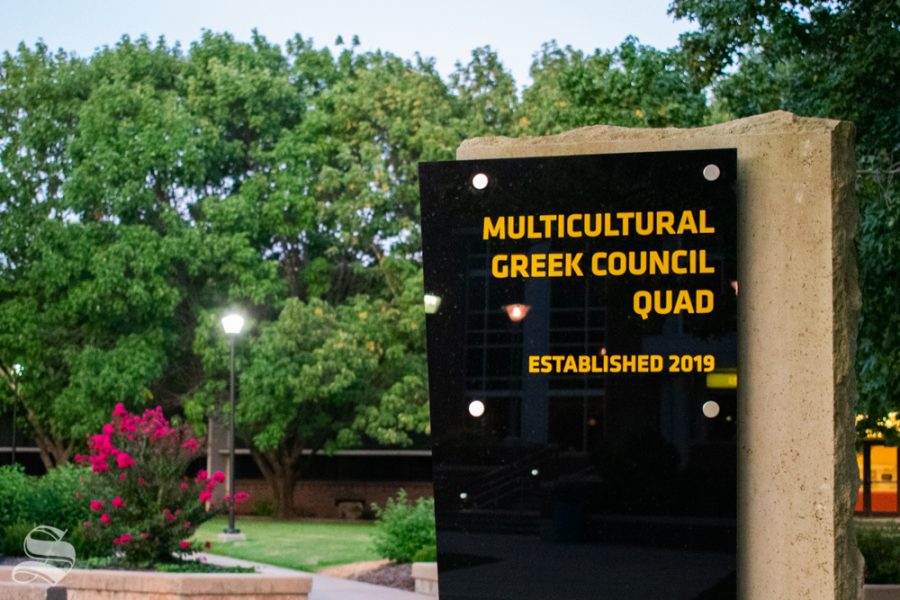 The Multicultural Greek Council Quad sign stands tall at the west entrance to the quad. The MGC will host a candlelight vigil for victims of police brutality this Friday at the quad.

As protests continue in Wichita and across the nation, a candlelight vigil honoring victims of police brutality will be held Friday evening on Wichita State’s main campus.

The vigil, organized by the Multicultural Greek Council, is intended to be a “peaceful gathering to mourn the loss of Black individuals due to police brutality,” according to the event’s Facebook page, and a call to “rally together to say that Black Lives Matter.”

The vigil will be held at 8 p.m. Friday in the Multicultural Greek Council quad, east of the Rhatigan Student Center.

During the first part of the vigil, several black students and community leaders will share their stories and messages, including Neiman Thompson, Greek relations director for the MGC.

“Oftentimes, black people aren’t given the proper platform and attention that they should,” Thompson said. “I thought it was kind of my civic duty to highlight these issues and bring the WSU community together.”

Several members of the MGC were motivated to organize the event after attending protests and rallies around Wichita this past weekend, including one held outside the police station across the street from Wichita State’s main campus.

“We thought it would be a great idea to bring one onto campus and into our community, so we can have some of our black student leaders share their thoughts, their feelings, and to have a group of our community really listen, appreciate, and learn how we can all do better,” said MGC President David Garcia.

After the speeches, a moment of silence will be held by candlelight. The MGC will distribute a limited number of electric candles, but people are welcome to bring their own.

Similar events around Wichita have been largely peaceful, so Garcia said he expects this one to go peacefully as well.

“We just want to make sure that people come out, rally, mourn together, come together, just respectfully listen and understand that we’re all going through a lot, and that there’s more work to be done,” he said.

Events held by recognized student organizations like the MGC must adhere to the university’s event registration guidelines— which means that any events that are held outdoors, that are publicized, or where “a controversial/political topic may be discussed,” are subject to review by the RSO Event Committee.

Because the vigil is considered a large-scale event, WSUPD will be on standby, Garcia said. However, no officers will be physically present.

“I specifically asked that no police be visible at the event, because I want our students to feel safe and be able to air out any grievances that they have, speak their mind, say whatever they want to say,” Garcia said.

The council hopes to keep the event centered on giving black students a platform to speak— and said they hope non-black attendees will “give space, rather than take space.”

“I think it’s important for the community to see other voices, to hear from people who you haven’t usually heard speak,” Thompson said. “We usually have to demand attention by constantly speaking out and protesting, and a vigil is a way for our students to hear stories from the oppressed, to shine a light on how Black Lives Matter. We always have and always will matter.”

Visit the MGC Facebook page for more information about the vigil.