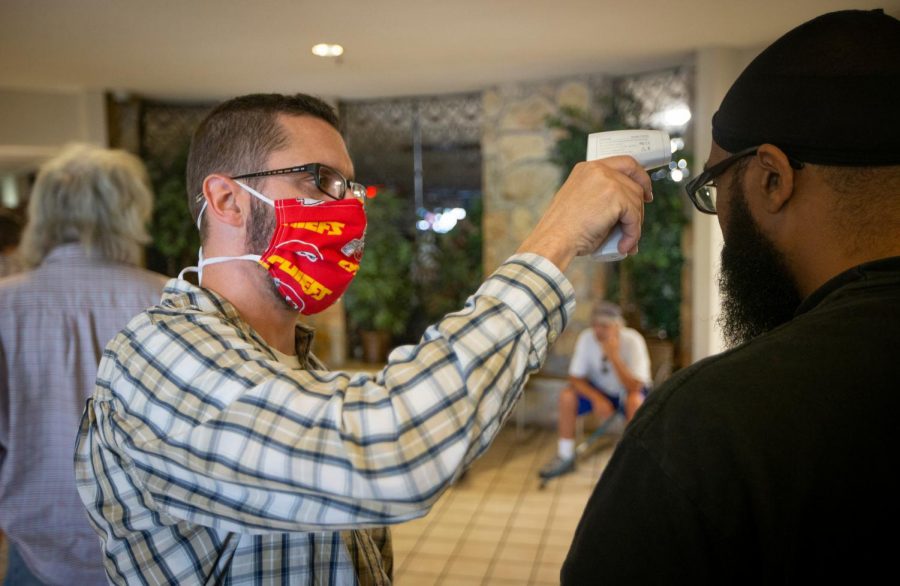 Chris McGathy, a case manager at the Union Rescue Mission, takes the temperature of people coming in for a meal at the facility June 2.

Without their own living space to practice social distancing in, many homeless Wichitans have continued to rely on communal living shelters during the COVID-19 pandemic.

In April, Wichita secured $850,376 of federal grant money through the CARES Act to help slow the spread of the virus among the city’s homeless population.

Luella Sanders, director of collective impact for United Way of the Plains, said that so far, no homeless Wichitans have tested positive for COVID-19.

“The providers have reported that they have had some folks that received testing, but no one who tested positive,” Sanders said.

Sedgwick County Public Information Officer Kate Flavin confirmed in an email that none of the county’s homeless have tested positive. She said that as of Friday, the county health department had tested seven homeless people.

But she did not answer how many people have been tested and did not respond to follow-up inquiries.

City spokesperson Megan Lovely said GraceMed and Hunter Health recently began on-site testing at shelters, but that the city does not have access to any data on the testing.

United Way identified 593 homeless people in Wichita and the surrounding area in its May 2019 Point-In-Time Homeless Count.

“With congregate living facilities like the shelters, if someone does test positive or does become symptomatic and does have COVID-19, if we don’t intervene quickly and already have the resources in place to do that, then it could really spread,” Sanders said.

Some shelters that usually close during the day for cleaning are now allowing people to stay all day. That means Open Door, a day shelter that provides showers, laundry, and mail services, is seeing fewer people and operating at reduced hours, Smith said.

Meanwhile, the HumanKind Ministries winter overflow shelter, which usually closes at the end of March, is still operating. HumanKind is receiving $120,000 of Wichita’s federal grant money, Lovely confirmed in an email.

But congregate shelters don’t have the capacity to let people self-isolate.

Lovely said another $300,000 of federal money is going towards motel vouchers through United Way for people in shelters who are showing symptoms and need to self-isolate.

Sanders said United Way is working closely with the Sedgwick County Health Department, which authorizes appropriate motels for isolation. She said the voucher program is about more than paying for a motel room, though.

“It is about connecting that person or making sure that they stay connected to community-based services and supports that are needed,” Sanders said.

“That person is likely to need transportation to get to a test site or to get to that motel. They are likely to not have income or not have it available while they’re in the hotel/motel, so making sure their essential needs are met.”

The contract between the city and United Way is still being finalized, Sanders said, and no one has been placed in motels through the voucher program yet.

Lovely said the city is collaborating with the county health department and the Impact ICT Continuum of Care to “identify gaps and needs to protect the homeless during the outbreak” with the remaining $430,376 of federal grant funding.

“It’s also worth noting that the funding is slated for COVID-19 assistance for those who are homeless through September 30, 2022,” Lovely wrote.

Before the outbreak, Wichita had already been budgeted for roughly $240,000 in Emergency Solutions Grant funding for homeless programs, according to a city report.

Sanders noted that stress can exacerbate pre-existing conditions in vulnerable populations, including the homeless.

“When you have someone who is already struggling with just meeting the basic survival needs, it would be understandable and actually expected that in times of severe or prolonged stress, that it would increase anxiety, depression — increase those already pre-existing conditions,” she said.

Doug Nolte, CEO of Union Rescue Mission, said members of the homeless population have the same concerns as everyone else during a global pandemic.

He said Wichitans have risen to the occasion and displayed their generosity over the past two months.

“One of the really cool things that we’ve noticed is that our community actually cares about those that are in need. Giving has been strong,” Nolte said. “We’ve had a lot of people reach out to us and ask if we need masks or if we need supplies.

The virus has understandably made volunteering more difficult, but Sanders said volunteer work is still critical to the success of Wichita’s homeless providers.

This story was produced by the Wichita Journalism Collaborative, a partnership of seven media companies, including The Sunflower, working together to bring timely and accurate news and information to Kansans. The effort is supported by the Solutions Journalism Network and funded by The Knight Foundation.