‘Be about it:’ Black leaders call on WSU community to stand against racial injustice 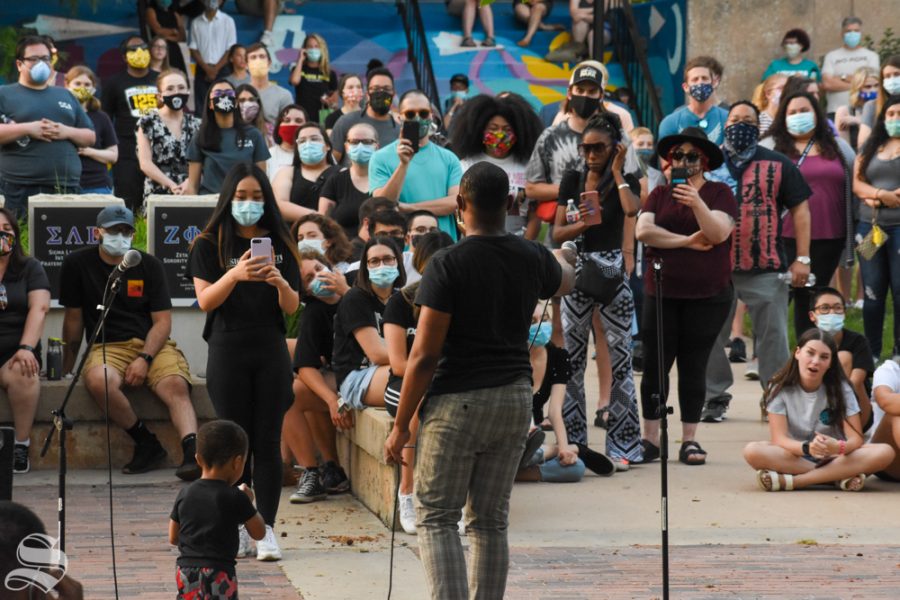 Cameron James, president of Alpha Phi Alpha fraternity, holds a mic to the crowd on Friday night as he leads a call-and-response of Queen Latifah's "Unity" at a candlelight vigil in the Multicultural Greek Council Quad. The vigil showcased several Black speakers and honored victims of police brutality.

The vigil, hosted by the Multicultural Greek Council, was held in honor of victims of police brutality. Four Black students and community leaders spoke, calling on the community to be united and take action against racial injustice.

Jorghialyn Kimble, president of the WSU Black Student Union, addressed recent police violence against Black people in the United States, including the killing of George Floyd.

“The ugly truth is that we’ve been going through this for years,” Kimble said. “When will it stop? When will Black lives truly matter?”

“Being socially active is a privilege,” said Thompson, who is the Greek relations director for MGC. “Some of us can’t show up to rallies, for fear of being jailed or prosecuted. Some people don’t have the time to take off work and fight for us.”

Prior to his speech, James led the crowd in a call-and-response of Queen Latifah’s “Unity.” He then noted that he saw more “white faces in the crowd than Black.”

“But just because you have a different skin color than someone, does not mean you cannot relate to their struggles,” James said.

Thompson pointed out the “racial difference” at Wichita State.

“I am a Black gay man in America going to a predominantly white institution,” he said. “Every day, I fear that I will die by the hands of a police officer. George Floyd could be me.”

Danielle Johnson, assistant director of the Office of Diversity and Inclusion, closed out the speeches with a call-to-action.

“I want you, my WSU community, to not just talk about it, but be about it,” Johnson said. “We cannot lose this moment. We have a moment to stop talking about what we’re gonna do, and actually shift the culture.”

Several members of the MGC were motivated to organize the event after attending protests and rallies around Wichita this past weekend, including one held outside the police station across the street from Wichita State’s main campus.