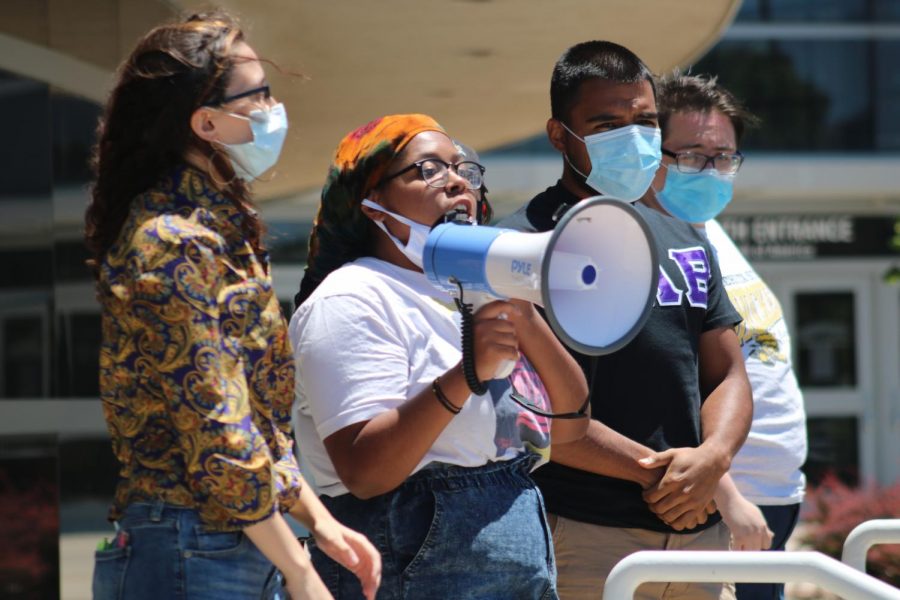 Wichita State students and alumni organized a rally in support of President Jay Golden on Wednesday outside of Charles Koch Arena, ahead of a Kansas Board of Regents Meeting that will reportedly decide Golden's future at the university. Left to right: Caitlyn Hammack, Tajahnae Stocker, Tony Ibarra and Grant Day.

More than 70 Wichita State students and other community members rallied in support of President Jay Golden on Wednesday outside of Charles Koch Arena, ahead of a Kansas Board of Regents meeting that will reportedly decide his future at the university.

The Wichita Eagle reports major Wichita State donors are threatening to pull support for the university unless the Kansas Board of Regents ousts Golden for canceling Ivanka Trump’s virtual commencement speech. KBOR has called a special meeting for 3 p.m. Wednesday.

WSU Tech announced Thursday morning that Ivanka Trump would be the keynote speaker at a virtual graduation ceremony last weekend. The university and WSU Tech reversed course just hours later, canceling her speech after widespread criticism from students and other campus stakeholders — including an open letter by a faculty member that collected nearly 500 digital signatures.

Student organizers spoke at the rally about their personal experiences with Jay Golden, as well as their overall experience at the university. Many of the student speakers were leaders from the Student Government Association and the Ambassadors for Diversity and Inclusion.

Student Advocate Caitlyn Hammack, vice president of ADI, said she came to WSU because of a diverse student body.

“I wanted to meet people of different backgrounds than mine. And Dr. Jay Golden is the champion for this,” Hammack said. “He shows up for us. He shows up for the underserved students, the students that I chose to go to college with.”

Hammack said she has recommended WSU to her younger sister for years, but if Golden is removed, she said, that would change.

“I love this school, I love my peers, I love the student organizations that I’m a part of, and that’s why I’m here today. We need to advocate for a leader that advocates for us.”

The Black Student Union started a petition in support of Golden, which gathered more than 4,000 signatures in its first four hours online.

Brandon Eckerman, one of two students on the presidential search committee that chose Golden, said Golden was the committee’s No. 1 pick throughout the process.

“[He was] unanimously chosen.” Eckerman said.

Eckerman said that during the unprecedented times students have faced this year, it’s been important to have a president who recognized students and their individual challenges.

“Things have been really kind of lame since everything went online,” Eckerman said. “But having Dr. Jay Golden as our president, it’s been helpful for myself to see the open communication and the fact that he is, you know, trying to recognize the graduating class.”

Eckerman said that President Golden is someone he looks up to and aspires to be.

“I want to walk across the stage and shake his hand, because he is someone I want to be someday,” he said.

Tajahnae Stocker, social activities coordinator for ADI and a staffer at The Sunflower, said students should be the most important voices when the university makes big decisions.

“I am no longer going to allow Pizza Hut, Koch Industries, big businesses [and] corporations, to tell me and my peers what I’m going to do,” Stocker said. “If [KBOR] fires Jay Golden, you are choosing a check over students.”

“If they choose to remove Jay Golden, it’s not over. They’re not going to bully us. They can threaten us, and try to cut funding, but we’re going to fight back.”