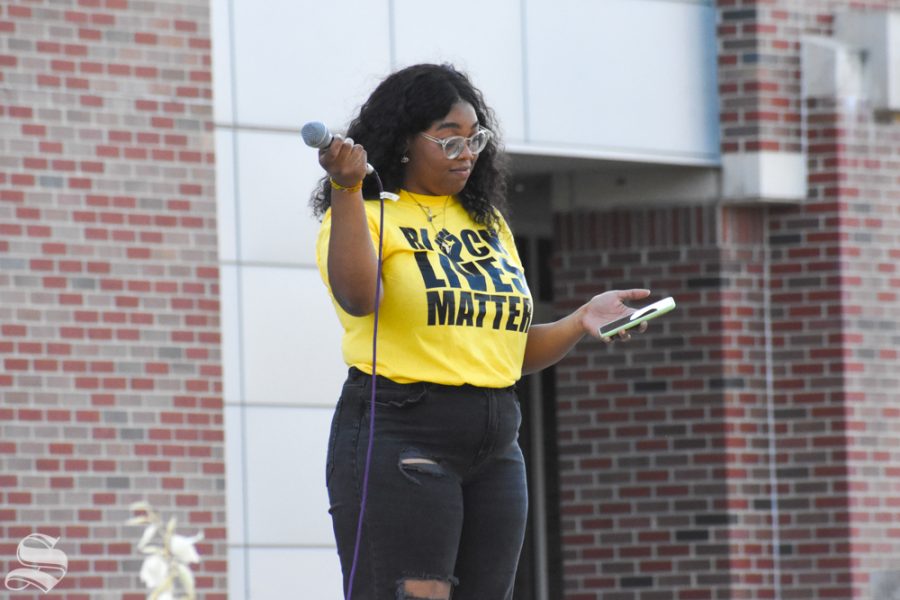 Alyrique Franklin, a junior at WSU, pauses Friday evening during her speech at a Black Lives Matter rally on campus.

As the United States approaches three weeks of demonstrations against police brutality since the death of George Floyd, a group of students organized a Black Lives Matter rally Friday evening at Wichita State.

A few hundred demonstrators met at the WSU Hughes Metroplex to line up for a cruise from the Metroplex to parking lots on the south side of campus. The rally began outside of the east entrance of the Rhatigan Student Center shortly after the cruise.

Stocker, a senior at WSU, emphasized the history of discrimination against Black women, as well as their role in the fight for Black rights and liberation.

“Our entire being, down to our hair, is an act of resistance,” she said. “You showing up to these protests, you repeating ‘Black Lives Matter,’ you posting a black square is the bare minimum. I need you to sacrifice.”

The speakers, most of whom attend Wichita State, called for non-Black allies of the Black Lives Matter movement to challenge white supremacy in their daily lives and social circles.

“This is a movement, not a moment,” said Cousin, a student at Clark Atlanta University who was raised in Wichita. “Today is about moving past acting into action; we need to stop acting like these are isolated events.”

“We need to stop acting like we’re surprised or shocked every time this happens.”

Cousin said she hopes people continue to stand with Black people in the long term, even if the current Black Lives Matter protests fall out of mainstream media.

Cousin and other speakers also drew attention to issues and events that affect the Black community in Wichita, such as the presence of police in public schools, redlining and “food deserts” — or neighborhoods that lack access to fresh food.

“It is unacceptable that the primarily Black schools that I attended had to scrape the bottom of the barrel for money just to provide us with textbooks that were not falling apart, while this was never an issue to primarily white schools,” she said.

Madison used her time to read the names and ages of Black people who were killed by police or racial violence in America — including Breonna Taylor, George Floyd and Tamir Rice — along with a brief description of what they were doing before they died. The crowd repeated each person’s name.

“All the names we just said were only a fraction of the number of Black people whose lives ended too soon,” she said.

Student organizers said the vehicle cruise allowed protesters to participate if they feared catching the coronavirus at large gatherings. After the cruise, a parking lot near the RSC was designated for those who wanted to hear the rally without leaving their cars.

Organizers provided masks and water to those in attendance, along with grab bags full of resources, information and snacks.

While the demonstration on campus was peaceful, Corbin, a sophomore at WSU, said she did not want to “condemn demonstrations of revolt.”

“Oppressors have used riots to perpetuate the large, fictional narrative that Black people are violent as though that’s some inherent characteristic,” Corbin said.

She quoted Martin Luther King, Jr.’s famous words, saying “riots are the language of the unheard.”

“Malcolm X also worked to emphasize that violence demonstrated by Black people is, more often than not, a response to violence first imposed unto them by white people,” Corbin said. “Angela Davis, when asked if the revolution would be militarized or violent, explained that this aspect depended on how the oppressors approached the voices and the demands of the people.”

“I say all this to say that Black people and their struggles need to stop being taken out of the context in which they exist.”

She also said Wichita leaders should commit to defunding and dismantling the city’s police department, as the Minneapolis City Council has done.