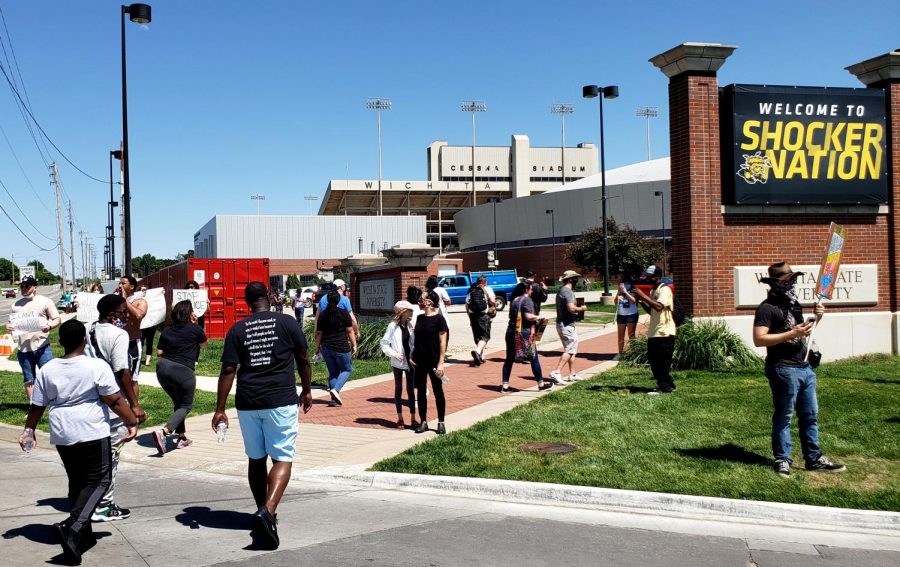 Students and Wichita community members gathered for a protest against police brutality at the Wichita police station near WSU's main campus on Saturday, May 30. Members of the campus community are working with the mayor's civil rights council to address issues like diversity and police brutality.

The Advisory Council on Diversity, Inclusion, and Civil Rights started meeting biweekly in June — a few weeks after demonstrations began in Wichita and around the globe in response to the police killing of George Floyd in Minneapolis, Minnesota. It includes 20 members, each selected for three-month terms.

One of those members is Kenzie Borland, a WSU junior studying strategic communication and co-owner of Dead Center Vintage.

In addition to having conversations about inclusion and diversity efforts in Wichita, Borland said she applied to be on the council to talk about legislation against police brutality.

“I think a lot of times people think, like, these things can’t happen in Wichita and that’s just not the truth,” she said.

The council is led by Whipple and City Councilman Brandon Johnson, both of whom are WSU alumni. Whipple is also an adjunct professor in the political science department, and Johnson recently became chairman of the Kansas Commission on Peace Officers’ Standards and Training.

Other members with WSU ties include Alicia Sanchez, director of the Office of Diversity and Inclusion and Ngoc Vuong, a junior studying psychology, public health, and economics.

Vuong said he applied to join the council at the recommendation of several community members.

“I became involved to advocate for strategies which address local inequities in healthcare, economics, education, and criminal justice,” he said. “You can’t address issues facing young people without having us at the table and more importantly, creating an environment where we are empowered to drive forth meaningful change and to hold bodies of power accountable.”

“As a young person, my goal is to help move Wichita beyond the inclusion of youth and into the leadership of youth.”

The council met in person for its first meeting and has since been meeting via Zoom. Borland said she thinks the virtual format somewhat changes the dynamic of the discussion.

“Everyone’s still showing up to the meeting,” she said. “But obviously, like, it sucks not getting to see everyone in person and, you know, getting to hang around and talk.”

That’s where the WSU Public Policy and Management Center (PPMC) comes in. The city hired the PPMC to help handle the logistics behind the council’s work and facilitate meaningful discussion through the internet.

“It’s difficult to do engagement via virtual and so you need a few more hands to help out with that and so that’s what we’re doing and trying to provide some research from other communities,” said Misty Bruckner, director of the PPMC.

“Putting a group together that doesn’t know each other, you have to be sensitive to how do you create trust?” she said.

A group of graduate students from PPMC is working on this initiative, Bruckner said. She said the graduate students benefit from the “applied learning” experience but also get paid for their work with the council.

“Sometimes they’re helping to facilitate a conversation, they help do research, they help with a wide variety of making things go well during the meeting, taking notes, doing the follow-up work and then research from other communities.”

The city employs over 3,000 people with a host of policies and programs at work. That can be daunting when undertaking an effort to improve diversity, inclusion and civil rights.

Borland said she sees students from the PPMC at work during meetings and finds it useful to have them there.

“I think sometimes people can be really intimidated talking to city officials. And I think it’s less intimidating sometimes to talk to the grad students,” she said.

Before the council’s most recent meeting, members took a survey to rank various topics based on their importance to each council member. Borland said she was surprised by some of the results.

“Because I was a young person on the council my priorities are going to be different than someone that’s probably been in the Wichita business scene for a really long time,” she said. “Their vision for the council is talking about diverse hiring practices and creating an equitable future where, for me, my vision for Wichita is more in like promoting youth empowerment and, you know, talking about police brutality and making sure that the young multicultural people are getting a fair shake.”

Borland said the conversations will help the council decide on a mission statement — an important step in sustaining the work they’ve begun.

“Right now we’re kind of defining what the Council and the purpose is,” she said. “We’ll actually have a mission statement for the council that will help people in the future that apply to figure out what we’re trying to accomplish here in Wichita.”