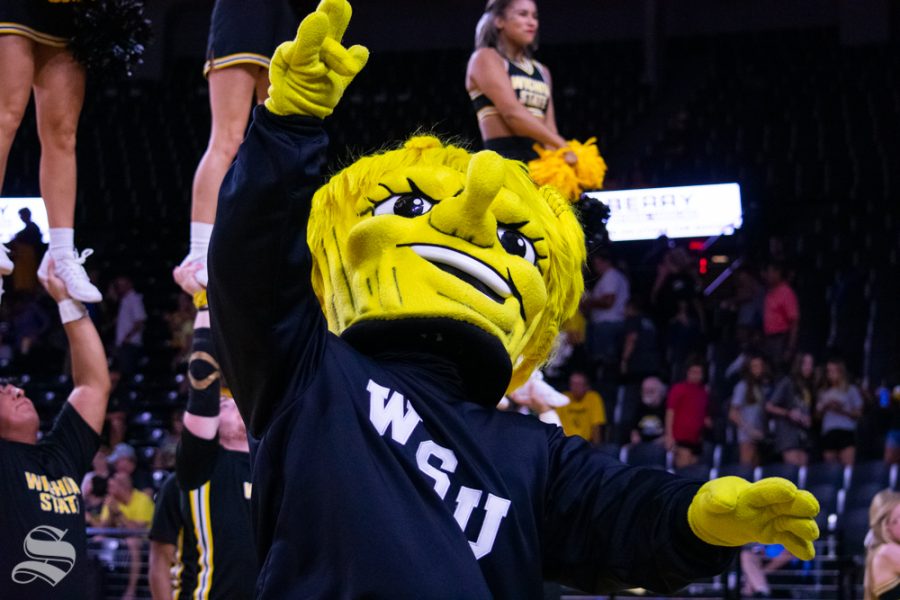 Wu pumps up the crowd during the exhibition against Kansas University on Aug. 17 at Charles Koch Arena. (FILE PHOTO)

Wichita State Athletics is having to adjust on the fly due to the COVID-19 pandemic. Earlier this summer, Athletic Director Darron Boatright told The Sunflower that only symptomatic student-athletes would be tested upon their return to campus.

Now, with more student-athletes returning to campus and improved access to tests, WSU will be baseline testing all athletes.

“We will be testing them so we can know what’s going on from when they return from home and then we’ll monitor them following,” Boatright said in a phone interview with The Sunflower. “We’ll do some cluster testing throughout the fall and the year, potentially.”

If an athlete tests positive as part of this testing, the athletic department will attempt to use contract tracing to locate other individuals that may be affected by the virus.

As the summer progressed, student-athletes gained more leverage in terms of workout activity. On June 1, basketball players were allowed to start voluntary athletic activities, which eventually evolved into summer athletic activities on June 20.

During a typical summer, coaches would be able to conduct complete practices, but this year’s workouts are significantly different. Boatright said the athletic department is limiting each workout to four student-athletes. The department is also limiting the number of managers and other staff present at workouts.

One of the major questions remaining for college athletics is if fans will be allowed to attend games this season. Boatright is hopeful for this possibility and is looking at different ways that it could be possible amid a pandemic.

“We’re making plans into it with evaluations on various scenarios, percentages of fans that would be allowed into the venues to watch,” he said.

One option on the table is hosting games inside the downtown INTRUST Bank Arena, which has a higher max capacity than Charles Koch Arena. In total, INTRUST could hold up to 15,570 fans, compared to 10,506 at Koch Arena.

At this point, Boatright remains optimistic that there could be some form of athletics played on WSU’s campus this semester, but he said safety is of the utmost priority.

“Hopefully, we’ll have some form of athletics if it’s safe for all concerned,” he said.

The American Athletic Conference has already delayed the start of fall Olympic sports until Sept. 1, while also primarily using a conference-only schedule for those fall sports.

Conferences around the country, most notably the Pac-12, are opting to delay sports until 2021. With some of the conferences choosing this path, the NCAA is postponing Division-I Fall Championships. For WSU, it will only affect cross country and volleyball.

“Sadly, tragically, that’s going to be the case this fall,” NCAA President Mark Emmert said Thursday in a video interview posted to social media. “That doesn’t mean we shouldn’t and can’t turn toward winter and spring and say ‘OK, how can we create a legitimate championship for all those students?’”

Emmert also brought up the possibility of introducing “bubbles” for some sports especially after the NBA and NHL utilized them to great effect on a national stage.

“If we need to do a bubble model and that’s the only way we can do it, we’ll figure that out.”