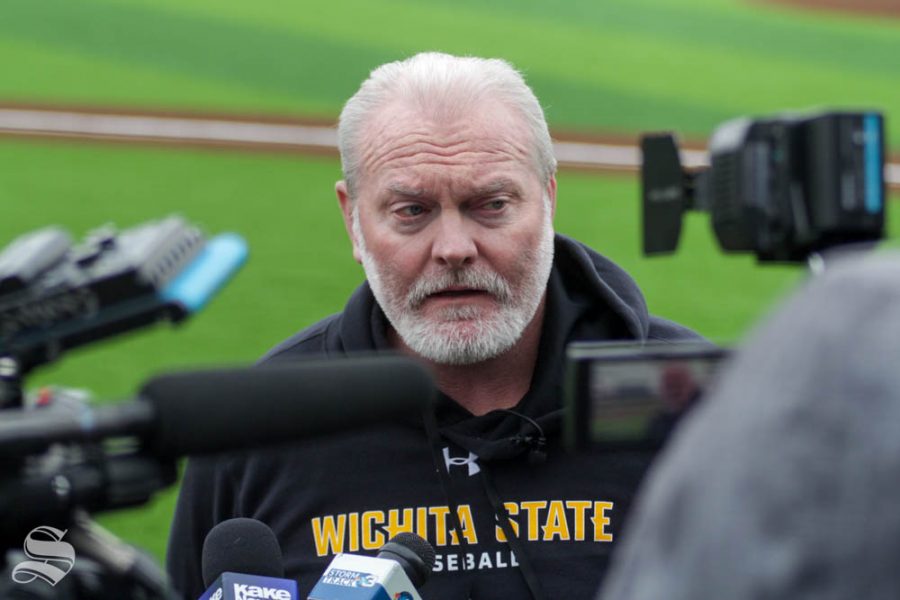 The Wichita State baseball program announced a pair of changes within the coaching staff on August 20. Both Nate Brisco and Easton Herring were promoted to new positions for this upcoming season.

For Brisco, he was very excited and thankful for the opportunity that Head Coach Eric Wedge and the baseball program gifted him.

“It’s something that I’ve been passionate about, I’m from Wichita, so I’ve always grown up in the stadium,” Brisco said. “So, being able to have my masters paid for, but as well as be full-time with the baseball team, I was just super excited.”

As someone that grew up around the baseball program, it has become full circle after attending games with his father, who had season tickets growing up.

“It’s really a dream and it’s a pretty cool opportunity. It’s the best coaching staff in the nation and to be a part of it is amazing.”

Prior to arriving at WSU, Brico had played at Kansas City Kansas Community College before deciding to come to WSU and become a student manager within the program. For him, being able to be a part of such a talented coaching staff was something he couldn’t pass up.

For WSU, the coaching staff boasts the likes of Eric Wedge and Mike Pelfrey who both played in the major leagues along with the collegiate coaching experience of Loren Hibbs and Mike Sirianni.

From Brisco’s perspective, it was a chance he couldn’t pass up.

“Literally, just sitting in the office and learning from them,” Brisco said. “It’s something I’d never thought I would have the opportunity to do.”

In the case of Easton Herring, he will be promoted up to the position of volunteer assistant after serving as a graduate manager since 2018. Overall, Herring was grateful for the opportunity gifted to him and feels it could help propel his coaching career.

Originally, Herring had planned to take a junior college coaching job down in Fish Mino, Oklahoma but a conversation with Coach Wedge helped change his mind and take in Wichita.

“I was looking forward to moving on after I graduate with my master’s but I had a good conversation with Wedge and we decided it would be good for me to stay here,” Herring said.

Like Brisco, Herring also grew up as a Kansas native and being able to be a major contributor in the program’s return to success was one of the reasons he decided to return to WSU.

“Growing up in Kansas watching the Shockers and all their success, I want to contribute to that and be a part of the success and being a part of turning the program around, getting on track to where it needs to be,” he said.

As part of his job as a volunteer assistant, Herring will work closely with assistant coach Mike Sirianni. With Herring’s new role with the program, he will coach the outfielders while also helping Sirianni in recruiting.

For Herring, he feels that having the opportunity to learn under Sirianni and Wedge will be a great opportunity in the long run.

“Being able to pick their brains everyday and learn from them has expanded my knowledge beyond what I could ever imagine,” Herring said. “It’s been a really good opportunity and I’m really thankful for the opportunity that Wedge has given me.”