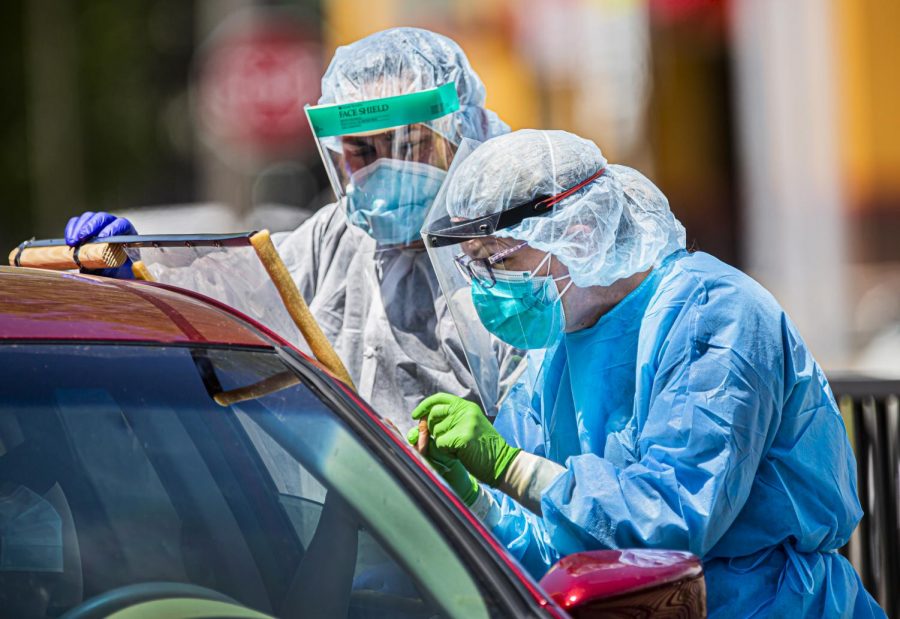 Wichita State University and Sedgwick County have banded together to bring the new Molecular Diagnostic Lab (MDL) to the community in an effort to increase COVID-19 lab testing capacity.

Technical Director Sarah Nikel is a molecular scientist who has been leading the charge on training people to get this testing center up and running. She said her first-hand experience seeing labs struggle to keep up with the pandemic makes it known that bringing a lab to the community is what it needs.

“It’s allowing us as a Wichita State team to offer something to the community that’s really needed,” Nickel said. “I work in the clinical laboratory world right now and we’re really struggling to keep up with the testing capacity and this is going to allow for much higher testing capacity then what we currently have.”

Associate Vice President for Industry Engagement and Applied Learning Tonya Witherspoon said in an interview with The Sunflower that the process to bring the lab to the community began after the realization that Wichita needed more tests available to keep the community open.

“We realized there was a lack of testing capacity in our region [and] that our hospitals were doing all that they could,” Witherspoon said. “What we realized, especially since school is starting and people are trying to get back to work, is that everybody needs to get tested regularly … just to make sure you’re not carrying the virus.”

Witherspoon said that bringing the testing center to Wichita began with the Ad Astra coalition, which was announced in early April.

“This whole initiative really started with the Ad Astra project that Rob [Gerlach] and Sierra [Bonn] started,” Witherspoon said. “We always called gathering the PPE step one and we knew supporting the economy would be step two, and that’s really what the COVID testing lab is.”

Gerlach and Bonn said that they hope the lab is able to prevent another shutdown.

“One of the big hopes and goals of this lab is so that way we can really help drive our local economy and get back to business while containing the pandemic at the same time,” Gerlach said. “We don’t realize how quickly an outbreak can occur and if there’s not the right amount of tracing and testing available.”

Witherspoon said the process to bring the lab to campus wasn’t as difficult as one might think, thanks to helping hands.

“It surprisingly wasn’t as hard as I think it might have been,” Witherspoon said. “Initially we had some help from Harvard to kind of get us on the right track and some other research institutes in Kansas City that helped us and then after that it’s our faculty in our health sciences program that really had the expertise.”

Unlike most COVID-19 testing centers, many of which send their samples to out-of-state labs, the MDL will have a much faster turnaround time and other perks.

“We’re very high volume testing, at the lowest cost possible with a quick response time, 24 hours at the most,” Witherspoon said. “Because of the capacity problem … testing is taking seven to 10 days to get a response and by that time why even pay for a test? … So, we wanted to do a 24 hour response.”

The county’s goal is to be able test 2,234 residents a day. Currently Sedgwick County is only testing about 800 residents per day.

Witherspoon said the MDL lab will focus solely on testing and will leave the contacting and the test collection up to Wichita’s health professions.

“There was no lack of health professionals out there that could collect the specimens and give people guidance but there was not enough testing,” Witherspoon said. “We want to utilize the clinics and the healthcare professionals that are already out there to do the test collections.”

The tests will be able to test for both COVID-19 and the common flu. Witherspoon said that this will be needed for the upcoming flu season.

“Here in the next month or two, you’re going to have symptoms and you’re not really going to know and so we want to test for all of that,” Witherspoon said.

The MDL is also awaiting approval to use saliva tests.

“We’re very excited about that because no one really wants to have that nasal swab,” Witherspoon said.

While they are now able to move the equipment into the building and start setting up the lab, plans to officially open are all tentative.

“It’s all kind of one step at a time to make sure … everything is working correctly,” Nikel said.