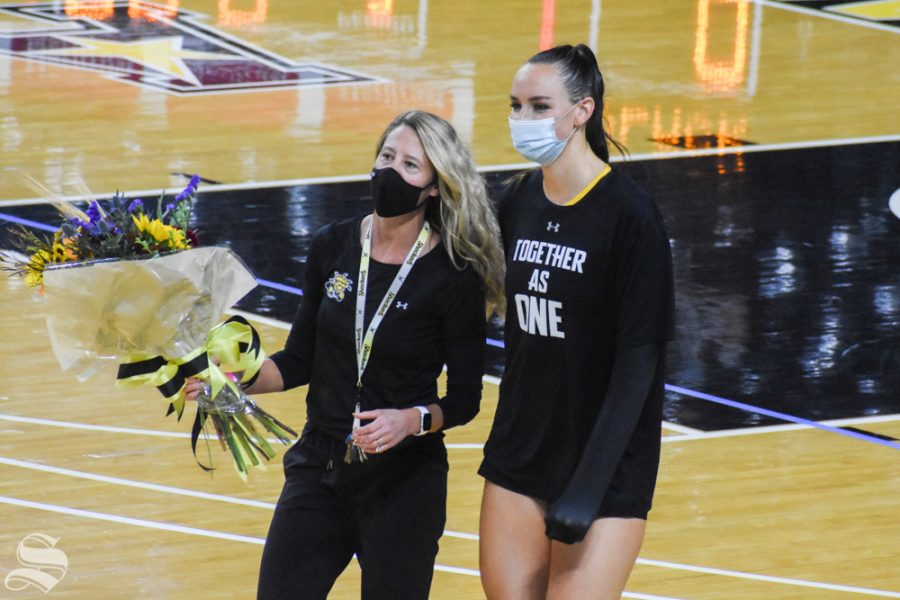 Wichita State senior Emma Wright walks with Director of Operations Shannon Lamb during her senior recognition during the Black and Yellow Scrimmage on Saturday, Sept. 12 inside Charles Koch Arena.

Just like many people within the Wichita State volleyball program, redshirt senior Emma Wright has had to adjust on the fly. Going into her final year of eligibility she was planning to play out the regular season and graduate from WSU in December but the AAC’s decision to delay the volleyball season until the spring has thrown a wrench in those plans.

Originally, Wright’s plan was to move back to her hometown of Phoenix, Arizona in preparation of graduate school in May.

“After we found out that the season was pushed back to spring, we’ve kind of been talking about the option of me staying for the spring for my last season,” Wright said. “It kind of depends on a couple of things, just figuring out when the season’s going to end and I still want to start grad school in May.”

With the uncertainty remaining for Wright’s career, the program honored her with a senior night ceremony prior to Saturday’s Black and Yellow Scrimmage.

For WSU volleyball coach Chris Lamb, he felt that honoring Wright prior to the scrimmage given the amount of uncertainty about the upcoming season was the best decision for the program.

“It’s really the best that we can do for her but there are some question marks moving forward in regards to what Emma wants to do,” Lamb said. “Of course there’s grad school looming.”

Overall, Wright was very appreciative of her four years at WSU and all the memories she had made over the course of her Shocker career. In her four years, which started with a redshirt year back in 2016, Wright has compiled a total of 342 kills with a hitting percentage of .271.

“I really hope it’s not my last time but I’ve had so much fun here the last four years and it was awesome that we had the chance to do it tonight just in case it was,” Wright said. “Tonight was awesome.”

Earlier this offseason, the NCAA also announced that they would be giving fall sport athletes another year of eligibility even if they end up playing a spring season. But the decision for Wright will be if she wants to come back and jumpstart the graduate school process.

“The NCAA is going to give them a year of eligibility back, but is that what Emma wants for Emma Wright?” Lamb said. “Maybe she was just planning on just playing this semester and moving on.”