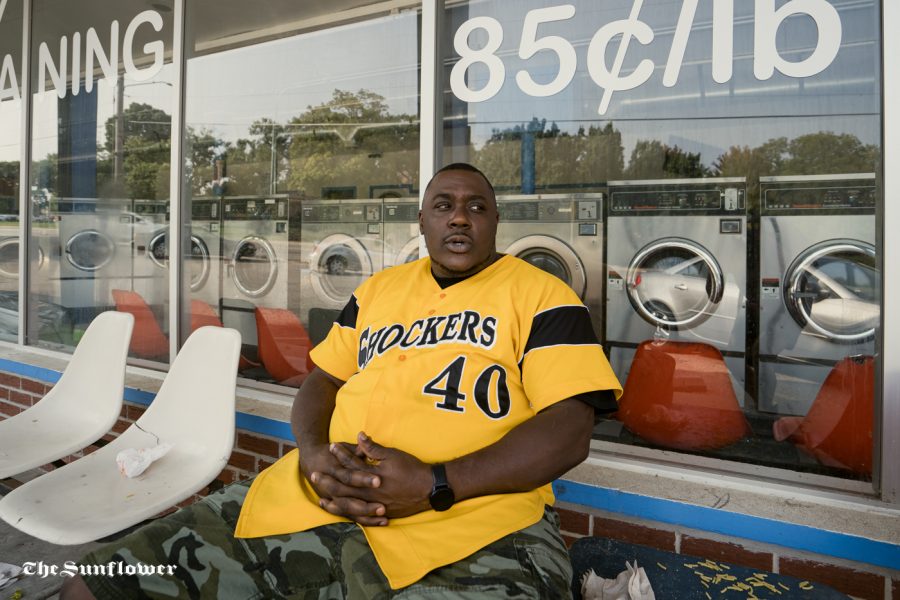 Sean “IZ316” Gates, a Wichita native, uses music to bring awareness to underprivileged communities and to spread his philosophies to those who need hope.

In many ways, music is a universal language that allows people to see eye-to-eye in a way that speech does not allow. Local artist IZ316 uses his sense of humor and passion for hip-hop to inspire like-minded individuals who grew up in rough neighborhoods. Sean “IZ316” Gates uses music to bring awareness to underprivileged communities and to spread his philosophies to those who need hope.

Gates has lived in Wichita his whole life. He grew up riding his bike all throughout town, including the campus of Wichita State. As a child he would hang out with his friends in the park and listen to music. In the sixth grade, Gates started freestyling; he was on his way to discovering his passion for music. When he was in the seventh grade, Gates started writing music

“Me and my friend, we had these two boomboxes, and so we took the instrumental from one side and on tape we recorded ourselves rapping into the mic on the other boombox,” Gates said. “So, we made this song and it wasn’t the greatest song ever, but people who knew us wanted a copy of it. For two weeks me and my friend were the most popular kids in school. That was when I knew it was for me.”

The neighborhood Gates grew up in was rough and he recalls going down an undesirable path. At one point, Gates had two children as a sophomore in high school and was in a juvenile detention facility by the time he was a junior.

When Gates was in juvie, he was visited by his father who had not been present during his childhood. Gates says he was shocked to hear from him.

“I think that society tells us if our fathers or parents are absent that we should be angry at them for not being there. What that doesn’t take into account is that even though they are your parent, they are still human. Initially I was filled with all this anger over my father not being there and I had all these things I was going to say to him about how he was such a horrible person but when he showed up it happened so fast that I didn’t have time to think,” Gates said.  “He said that things didn’t work out with my mom and that he was sorry. At that moment I felt all that anger just go, it just released. I’ve been cool with my dad ever since.”

Gates let go of the pain and the hurt and put his newfound sense of resilience into his art. He will be releasing a new single in about a month titled ‘Let it go”.

Later into his school days, Gates decided that he wasn’t going to let his past determine his future.

Growing up in Wichita influenced Gates to attend Wichita State University where he double majored in Political Science and Ethnic Studies. Gates’ field of study has influenced the content he creates.

“I’m a socially conscious rapper. [My field of study] gave me a lot of insight scholastically and a lot of stuff to talk about artistically…It helped because when I’m writing songs, I’m writing from the perspective of someone who’s talking to someone outside of my community. And when I say my community, I mean people who are like-minded,” Gates said. “People who didn’t grow up with a silver spoon. It’s not determined by race, it’s determined by mindset. We had white kids in our neighborhood that had the same socio-economic struggles that I faced as a kid. My field of study helped me understand the things that people outside of my community don’t understand and how to explain it in a way that is digestible.”

Aside from hip-hop, Gates works with high school students, making sure they are set on the right path and developing the necessary soft skills for life after high school. He typically works with children who come from disadvantaged walks of life. He helps them plan things out and has one-on-one conversations with them to help them succeed down the line. He also says that he and the students “talk a lot of crap” back and forth about their basketball skills.

Gates has also worked on political commentaries and was a member of office for a short period of time. He says he is currently on the Sedgwick County Mental Health Board, the City of Wichita Civil Rights Board, and the City of Wichita Community Corrections Board. Gates tackles all of this on top of producing hip-hop music independently.

Being an independent hip hop artist comes with hardships. Gates says budget is always a factor and name recognition is something that always comes up. Gates joked that he would mention to people that he is a rapper from Kansas and people’s response is typically, ‘There’s black people in Kansas?’

“Initially everyone’s like, ‘A rapper from Kansas? What is he going to talk about?’” Gates said. “Overcoming that can be difficult but then when they hear my music, I think it turns into a bonus, because they didn’t have any expectations, so when they hear the music and they’re like ‘Oh, this guy’s good’ it fares well for me.”

Gates’s most recent single, “Top Down (feat. Breanna Marin)” has over 309,000 hits and is still climbing. It has been played on 20 different stations thus far and is the biggest single Gates has released.

Listeners can stay up to date on Gates’s music by going to his website, IZ-316.com. His music can be found on all streaming services including Apple Music. His new album featuring “Top Down” and “Let it Go” will be released sometime in early 2021.