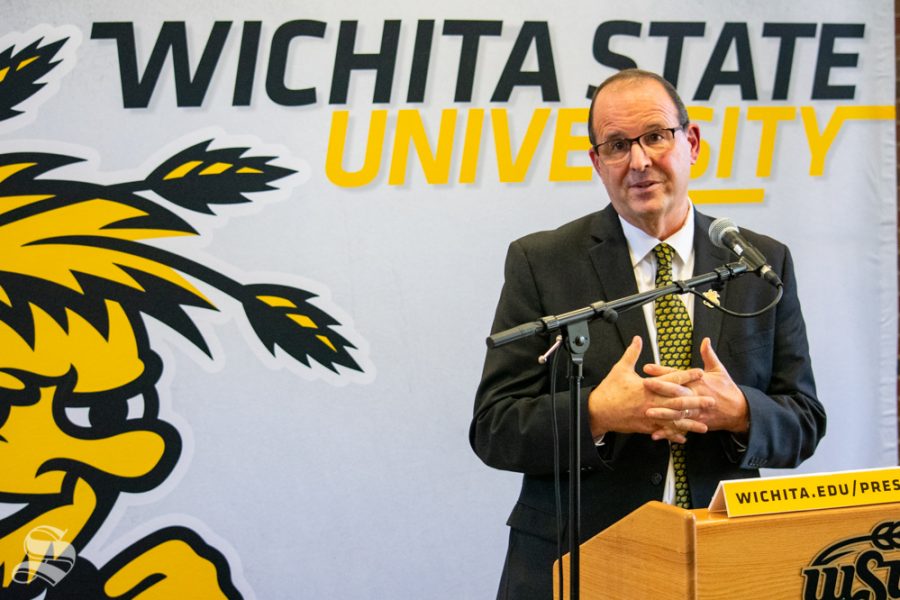 Jay Golden, the new president of Wichita State University, answers questions from members of the press on Thursday, Oct. 31 in the Rhatigan Student Center. Golden previously served as the vice chancellor for the Division of Research, Economic Development and Engagement at East Carolina University.

Wichita State University President Jay Golden resigned from his position just shy of nine months on the job. The Kansas Board of Regents announced the resignation Friday, which will be effective immediately.

“Wichita State University President Jay Golden has submitted his resignation to the Kansas Board of Regents. The Board is thankful for his service,” the KBOR statement read.

“We are appreciative of his hard work and dedication to the university and are grateful for his commitment to serving students. We wish him well in all his future endeavors.”

In early June, donors threatened to pull funding from the university if the Board of Regents didn’t oust Golden after he changed Ivanka Trump’s graduation speech from keynote to optional. Students held a rally in support of Golden  and after a four-hour meeting, KBOR took no public action and Golden remained president.

Regent Jon Rolph told KMUW that Golden’s resignation is not related to the Ivanka Trump controversy.

“If the board was going to take action on that, it would have been in June,” Rolph told KMUW.

Faculty Senate President Aleks Sternfeld-Dunn said the announcement came as a shock to many, including himself.

“I was just surprised,” Sternfeld-Dunn said. “It was not something that was on my radar.”

University Provost Rick Muma will take over as acting president until an interim president is selected.

Sternfeld-Dunn said he believes past interim President Andy Tompkins would be a good choice to fill that position.

“I don’t know who that will be, but I thought President Tompkins did a great job while he was here and then a national search will begin again.”

Past Student Body President Kitrina Miller served on the search committee that chose Golden. She said hearing the news that Golden resigned was a shock.

“[It’s] definitely not something that I would have expected, especially so soon,” Miller said.

She said she believes that the student body deserves an explanation as to why Golden resigned.

“I’m really curious how much administration really knows because I know if it was sent directly to the Kansas Board of Regents, then administration maybe doesn’t know the full story yet,” Miller said. “Definitely at the bare minimum [students should know] the reason Dr. Golden submitted his resignation.”

“It’s saddening. Dr. Golden was very loved by students,” James said. “A few months ago, we all rallied around him. This is going to have a long term effect. The next president is going to have high standards already placed on them already.

“Jay Golden was the students’ president.”

Student Body Vice President MacKenzie Haas said that Golden will be missed by the university.

“Jay Golden was collaborative, listened to students and wanted what was best for students. He will be missed,” Haas said. “We really want to thank him for all the work he did and for making our campus a better place in the short amount of time he was here.”

Speaker of the House Olivia Babin said that she hopes Golden’s successor will echo his goals.

“Jay Golden worked hard for students and showed us all what a university president should be,” Babin said. “I want to thank him for his service for students. I hope whoever his successor is will follow in his footsteps putting students first.”