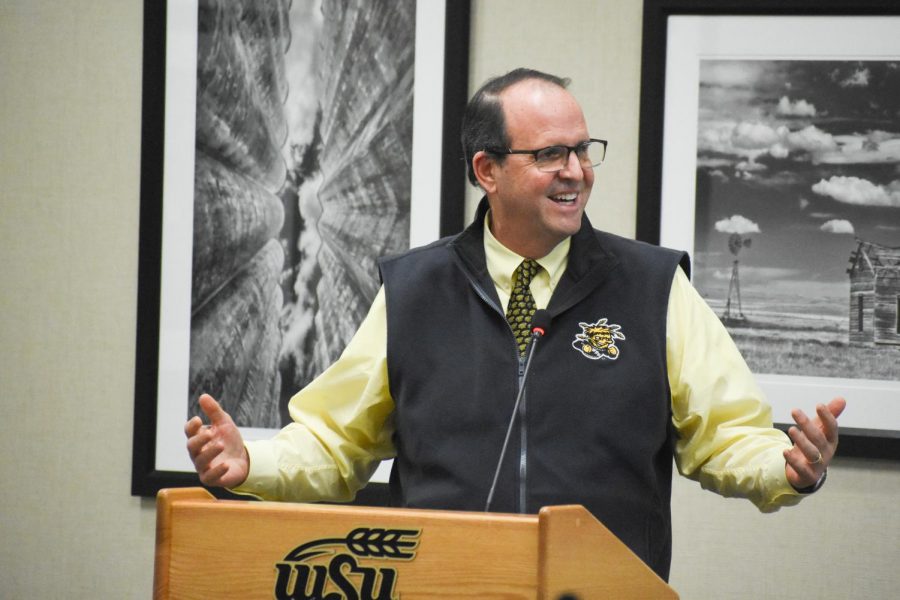 To whom it may concern:

We are writing this letter to recommend Dr. Jay Golden for your institution.

When Golden was selected as president of Wichita State in October, he expressed a goal for the university to be student-focused.

In June, Golden proved that those weren’t just words. When WSU Tech announced Ivanka Trump as keynote speaker for its virtual graduation ceremony, students expressed concerns to WSU. Golden listened to those concerns and changed Trump’s speech to optional.

Some threatened to pull funding if the Board of Regents didn’t call for Golden’s resignation. But still, Golden didn’t back down. He knew what the students wanted and refused to listen to donors over the student body.

Jay Golden is exactly what a president should be: transparent, student-focused and liked by both students and faculty. He only ever wanted what was best for students and made sure they knew that he was always there for them.

Even before Golden was hired, WSU said in its own way that he was perfect for the job. In the presidential profile sent out during the search for a new president, WSU laid out everything a president should be. It’s safe to say that Golden measured up to these expectations.

“An astute listener who makes a priority to know the faculty, staff, students, and needs of the students and institution,” one of the bullet points read.

Golden disrupted the status quo of Wichita State. He brought students, faculty and staff into the decision-making process. He didn’t tell people what they were getting after the fact.

He asked them what they wanted on the front end and listened when they spoke. He understood the goal of a public university is to educate above all else.

Students need to have a personable leader, and they need someone who values their input.

If you want a president who camps out in his office and does whatever he’s told, Golden isn’t your guy. But if you’re looking for one who will lead the university into a student focused approach, he’s exactly what you’re looking for. When it comes to students’ needs, Golden will never back down.

Just three months into the job, Golden had to lead the university in its COVID-19 response, which is most definitely not what he imagined when he signed up for the job. But through it all, he wanted what was best for students even when they weren’t physically on campus.

It’s safe to say his time at Wichita State was never smooth-sailing. But he made an impression on our history, and for that we are all grateful.

A few things you should take note: he doesn’t like being called Dr. Golden. Call him Jay.

He walks his dog, Rudy, daily. If you see him out and about with his dog on campus, remember to say hi.

If you’re a student journalist who gets the opportunity to interview him, save an extra five minutes for him to ask you questions. He wants to know about you, too.

So, to whoever has him next: Take care of him. He’s one of a kind.