EDITORIAL: We deserve an explanation for Golden’s resignation 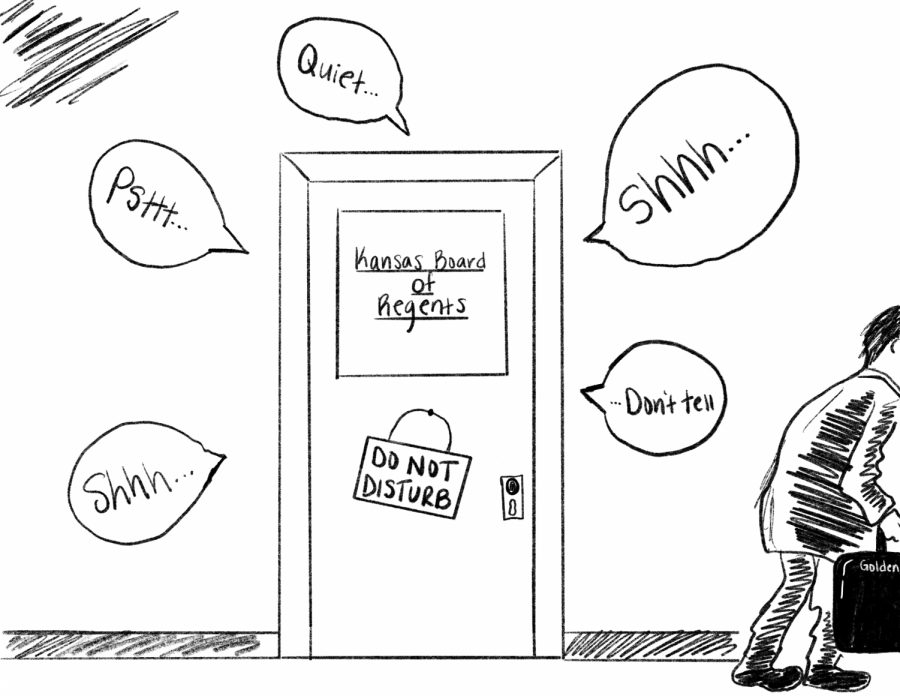 Trust is a key ingredient for any university that wants to move beyond mere functionality towards a higher plain — to a place where students, faculty and staff can thrive. But trust doesn’t come easily these days.

The biggest decisions that impact the Wichita State University community are made behind closed doors and we’re asked to sit tight with no explanation, no justification, no reason or purpose for them. We’re asked to trust that everything is okay without being told the truth. That’s not going to fly.

Currently, WSU is facing an unexpected situation and the mystery shrouding it hurts our trust in the institution we hold near and dear. On Friday, the Kansas Board of Regents announced that Wichita State University President Jay Golden resigned from his position after about nine months on the job.

The reason for this sudden departure? Well, the public isn’t being offered a reason.

Regent Chair Bill Feuerborn’s statement is just 96 words long and does not address why Golden resigned.

University presidents don’t just abandon their posts, and some students pointed out that Golden had posted on his official Twitter account only hours before the resignation. Everything seemed fine Friday morning.

His abrupt leave leads us all to imagine the worst.

In his short time as a university president, Golden earned the respect of the student body. It’s not clear what the university might have looked like in the long term with Golden in charge, but it’s commendable that he made an effort to establish meaningful relationships with students — especially during a pandemic.

Now, the community is left wondering if they backed the wrong guy.

Were we duped? Did Golden give up?

Or was Golden pushed out, and if so, by whom?

We have been offered no explanation for Golden’s resignation. Surely we deserve one.

The Kansas Board of Regents selected Jay Golden to be the 14th president of WSU on Oct. 31, 2019. Golden, then a vice-chancellor at East Carolina University, was selected after a closed search process — meaning the public was not allowed to know about or meet any of the candidates.

Golden officially began his work in January. Less than three months later, WSU, like the rest of the country, was forced to make sweeping changes to day-to-day operations in an effort to address COVID-19.

Throughout the chaotic months that followed, Golden remained positive. He remained visible and it seems like he was committed to keeping the community informed. It was a pleasant surprise to find that even the earliest pandemic planning team meetings were not being conducted in secret.

That said, there is one place where the campus community has questioned Golden’s commitment to transparency — the WSU COVID- 19 dashboard. The dashboard data only includes students who have been tested at Student Health Services since August 3, 2020. It does not include testing results from WSU staff, faculty, or students who may have been tested at a different site or with their own healthcare provider. This was a mark on Golden’s tenure.

But Golden answered questions and responded to requests for information and interviews — this was a sharp and welcome change to the way the previous administration behaved. For many students, it was comforting as well.

Golden wasn’t perfect. But he was a refreshing presence on the WSU campus.

He listened. He let people shape decisions before they were set in stone instead of trying to convince them after the fact that it’s what they wanted or needed. That’s how he built up a loyal following during one of the toughest years the university has faced in recent memory.

At no time was the WSU community more fiercely protective of Golden than after the controversy that surrounded Ivanka Trump’s invitation and subsequent disinvitation to be a keynote speaker at WSU Tech’s virtual commencement ceremony in June.

Recall that the nation had just begun to protest en masse over the police murder of George Floyd. Tensions were high. The debate over reopening the country was pitting neighbor against neighbor. After WSU Tech announced that Ivanka Trump would be the keynote speaker at WSU Tech’s graduation, the reaction from the community was swift.

An open letter, written by a faculty member and signed by hundreds of students and other campus stakeholders, influenced the university’s decision to move Ivanka Trump’s speech from a keynote presentation to an optional message at the end of the ceremony.

And when donors and local business owners called for Golden’s resignation over the scrapped speech, students quickly planned a rally outside of Koch Arena in support of the president.

Students expressed their concerns using a new hashtag — #IStandWithGolden, with one group printing the phrase on stickers and T-shirts. The Black Student Union also started an online petition supporting Golden that collected more than 10,000 signatures.

It’s going to be hard to convince the student body to trust another president as they did with Golden. The sudden departure of a president who has by-and-large been an advocate for students sends the wrong message to our community and to prospective students and donors.

We’re not wrong to demand transparency and shared governance from the administration. We deserve more than the bare-minimum of presidential leadership and excuses for a lack of transparency. That’s why the next presidential search must look vastly different from the last.

KBOR and WSU should run an open search for the next university president. Regardless of the details surrounding Golden’s departure, it’s clear now more than ever that the WSU community-at-large should lead the process for selecting its next leader.

But more importantly, the community should lead WSU’s decision-making as a whole and should not be kept in the dark about major developments.

KBOR and Wichita State need to rebuild trust with community stakeholders and the only way to do that is to be completely transparent. That means decision-makers have to be open, vulnerable and willing to compromise.

It also means we need to know why Jay Golden resigned without a word.