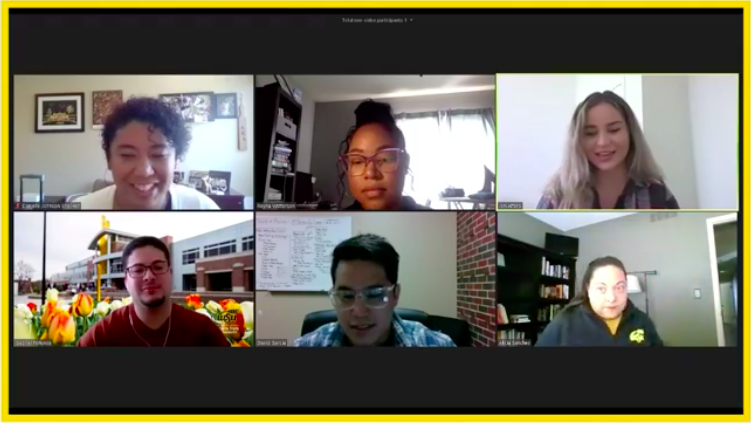 The Office of Diversity and Inclusion held the "Latinx or nah" virtual panel Tuesday.

The Office of Diversity and Inclusion hosted the panel “Latinx or Nah” on Tuesday, Sept. 29 to discuss the new gender neutral term “Latinx”.  The panelists, who are all part of the Hispanic/Latinx community, sat down to discuss whether they embrace this new terminology.

Gabriel Fonseca, the Assistant Director for Student Involvement, said that his family in Puerto Rico barely uses the term Latinx. He said he uses it more often with people from his generation or younger.

“I’m gonna be honest, I rarely use it,” Fonseca said.  “I recognize the importance of it and why but having to retrain my mind with the spanish that I’ve learned … it’s been an interesting learning curve.”

David Garcia, the current director of public relations for the Student Government Association, said that he uses the term Latinx more often around people who don’t identify with the term Latino or Latina because it is more inclusive.

“There is no wrong in using the labels that people want to use,” Garcia said.  “It’s that easy to ask what you want to be identified as … I don’t want the term to be used on me but I still want to be inclusive.”

The panelists all shared a mutual experience with filling out their race on forms.  The panelists said that they don’t usually identify with any of the normal choices given.

“A lot of times I just don’t answer because it’s like they just want you to be something … I feel like the beautiful part of ethnicity and race is that you can be so much more than what people want you to be.  I’m biracial and my parents also have so many ethnicities in them so four boxes to choose from just doesn’t cut it,” Reyna Watterson, a WSU student majoring in spanish said.

“I know that if I go back home and tell my grandparents about Latinx they are going to look at me and think I’m crazy,” Alfaro said.

Alicia Sanchez, Director of the Office of Diversity and Inclusion at WSU, said that her culture also struggles with gender roles.  She is one of the first women in her family to work full-time and be a mother, and is sometimes criticized by her mother and grandmother for not staying at home.

“For myself, I wouldn’t identify as Latinx,” Alfaro said. “I understand that we are trying to be inclusive but I just feel like [identifying as Latina] is something that I already have in me.”

Garcia said that at the end of the day, individuals should work on using the terminology that they feel comfortable with.

“I feel like it’s subjective and based on the individual,” Garcia said. “Whatever word makes you proud and empowers you, you should use, and you should ask people to use that word … I think that as latinos and hispanics and latinas, we need to celebrate the spectrum of who we are as people.”