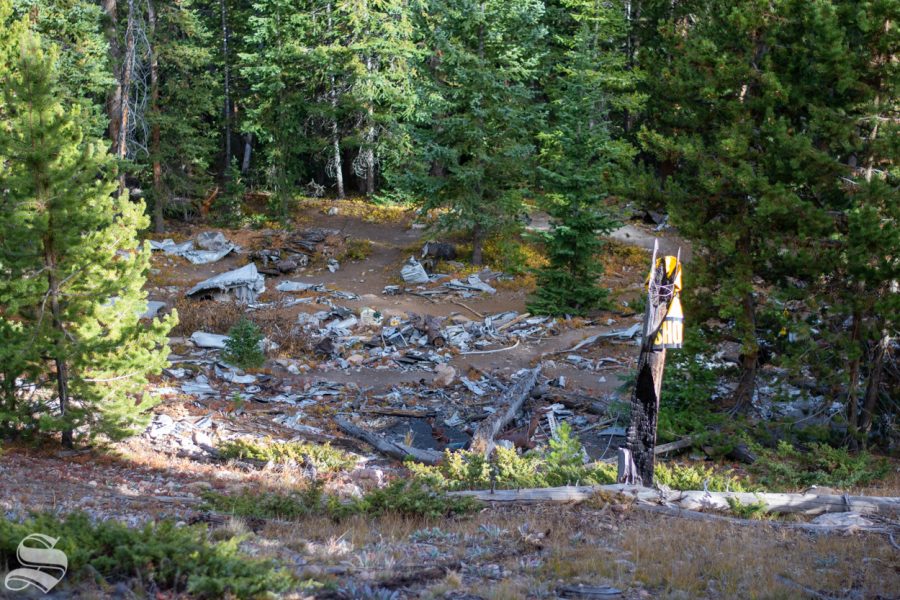 An overlook view of the plane crash site.

Fifty years ago, tragedy struck the Wichita State football program. A plane carrying 26 student-athletes, athletic officials and some fans traveled to Logan, Utah for a game against Utah State. The group would never make it to Utah.

The plane crashed into a mountainside in Colorado, killing 31 people on board. Only eight players and the co-pilot survived the crash.

In the days after the crash, then-President Richard Nixon wrote a letter to the WSU community expressing his condolences.

“Mrs. Nixon and the members of my traveling party join me in expressing our deepest sympathy to the families of those who were killed in this tragic accident and also to you and to the members of the Wichita State community,” Nixon wrote.

Current Shocker radio broadcaster Mike Kennedy remembers the day vividly. At the time, Kennedy was a student and working at KMUW doing broadcasting.

Kennedy remembers somebody checking the AP wire machine and seeing a story about WSU’s plane crashing in Colorado. The story was supposed to be embargoed, according to Kennedy.

“It wasn’t supposed to be released yet,” Kennedy said in a phone interview with The Sunflower. “I think we were some of the first people in Wichita to see it or know anything about it. We immediately went into figuring out plans on what do we do now.”

As a student at the time, Kennedy felt that this kind of tragedy helped bring students together especially since many people hadn’t experienced a tragedy like this before.

“Unfortunately in some ways, a tragedy like that brings people together in a way that’s rare,” he said. “You all have this common purpose and a common bond of grieving for the people involved. I think there was certainly a sense of that on campus.”

Despite going through this incredible tragedy, there was still hope from players that the WSU football season would continue. The remaining team members held a vote to decide if they should continue the season without any coaches involved.

Only one player voted no.

The program struggled in its return against Arkansas only two weeks later, losing 62-0. The Shockers went on to lose every game for the rest of the season.

In the remaining years that followed, the program struggled to stay afloat and find success. Because of financial concerns and a lack of community support WSU’s football program folded in 1986. This came as a shock to Tom Shine, a former Wichita Eagle sports writer and veteran journalist who covered the final two years of WSU football.

“I had asked the president, Warren Armstong, maybe less than two weeks earlier directly ‘Will you have a team next year’? He said yes,” Shine said. “I kind of took him at his word and they announced they were folding it and I was not happy.”

As the university decided to end the football program, parents became very upset with WSU’s decision. Many felt that it was disrespectful to all of the players that had died in the crash. Shine said he even received a letter from one parent who voiced her displeasure about the university’s decision.

“As long as Wichita State played football, they’d kind of live on and she was really upset, as were many other people, that the folding of the program was a slap in the face for those players and coaches that died,” Shine said. “This was 16 years later but the emotions were still very strong and raw and they were very unhappy about it.”

As Shine reflects on that fateful Oct. 2 day, he said he thinks about all the opportunities the players missed and the impact it had on families involved.

“It’s really a terrible, terrible tragedy on so many levels,” he said. “I still think it touches people in the community.”

Today, some of the wreckage still remains along the mountainside next to Interstate-70. This summer, Wichita Eagle photographer Travis Heying visited the plane crash and was shocked by the impact of seeing the plane crash site.

“I remember coming upon this part of the path where there were a lot of new trees and you kind of had to push them aside a little bit and then it’s this big piece of sheet metal lying right in front of you,” Heying said. “It’s pretty jarring when you come upon that.”

For Heying, he originally didn’t plan to just visit the plane crash site in Clear Creek, Colorado. As he was on vacation in Colorado he decided to go for a hike near the site. But as he was there, he felt that he needed to stay there and encapsulate the whole experience.

“I felt a desire to stay there,” Heying said. “I wanted to explore the area, which I did, but I kind of wanted to just be there and stay there for a while. It was just kind of overwhelming. I felt this desire to really soak it in.”

According to Heying, no Eagle photographer had gone up to take photos of the site in his 20-plus years at the paper. But for him having the experience of going to the site was especially powerful.

“That really takes the experience of visiting and makes it all the more powerful,” said Heying. “It’s amazing how many people to this day, that tragedy touches.”