Clubs and organizations on campus you may not have heard of: Society of Cosplayers 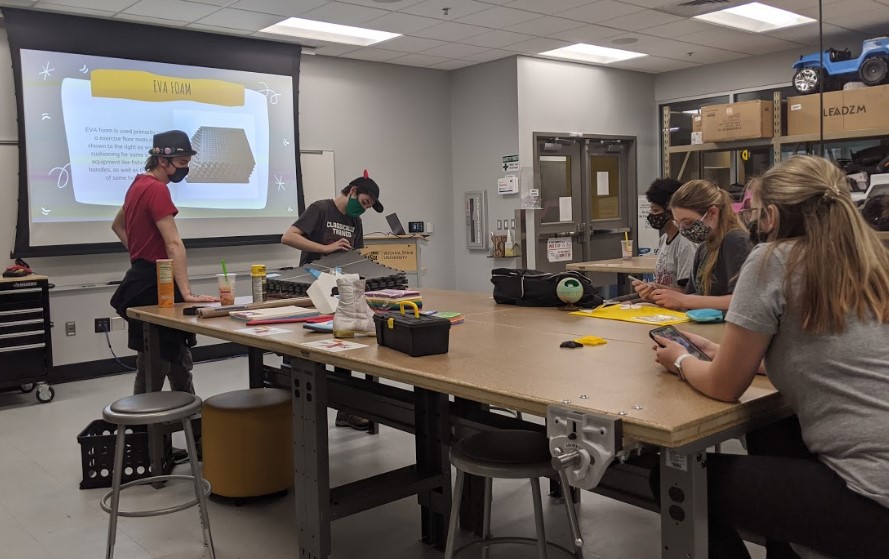 The Society of Cosplayers workshop and meeting on Wednesday evening in the John Bardo Center where they focused on foam work. Every workshop focuses on a different skill essential to cosplaying.

Cosplay is the act of dressing up as a character from a movie, show, or book. Many cosplayers even create their own characters and attend conventions dressed up as them. The cosplay community has been growing with each passing year, attracting creatives from all around the world.

Wichita State has its own community of cosplayers. The Society of Cosplayers is a registered student organization open to anybody interested in learning about cosplay. President Mikayla Haynes said that they hold meetings and workshops about different ways to cosplay.

“We are creating a community where people can come together and learn new skills that involve cosplay,” Haynes said. “Leaning stuff about foam work or sewing can really help someone who is trying to make something from scratch… It’s a learning environment, but it also has a social and community aspect to it.”

Haynes has always loved dressing up for Halloween, but they say that their love for cosplay stems from something more than that.

“I was just so enthralled by these characters that I wanted to step into their shoes or into their world and see what it was like,” Haynes said.

Near the end of their high school career, they dressed up as the white rabbit from the live-action version of “Alice in Wonderland” to school for Halloween.

“The costume was more abstract in a way,” Haynes said. “I did my eye makeup red since the bunny doesn’t get a lot of sleep. I wore these white shoes and puffy pants and wraps around my legs. It was really fun to put together.”

Haynes’ first “full-on, what a character is supposed to look like cosplay” was a gender-bent version of Dipper Pines from the cartoon “Gravity Falls”.

“[Mabel and Dipper Pines] are really two easy characters to work with when first getting into cosplay and I would say if you’re barely getting into cosplay then choose a character that’s easy,” Haynes said. “Pick something that you can literally get all the things you need from a thrift store. It builds up your confidence.”

Event coordinator Noah Marler says that cosplay is the perfect outlet for creatives.

Marler, Haynes, club members, and some community members were planning on a group cosplay for Naka-Kon, an annual convention celebrating anime, manga, cosplay and more, in Kansas City earlier this year. The convention was cancelled due to COVID-19.

“What we were gonna do at Naka-Kon was actually going to be my first costume,” Marler said. “I’ve done Halloween costumes in the past and that’s great, but there’s something about the feeling of being up in the workshop and working on the clothes and piecing together different things. It just entranced me. It was me getting creative and it was really disappointing when Naka-Kon was cancelled.”

They were planning on going as a “skin line” off the game, “League of Legends”, called Star Guardians. They are currently still wanting to stick with that cosplay for Naka-Kon in March 2021, but the group cosplay might involve some different people than originally planned.

“We are just a group of people who appreciate the media and we are just artists and creators making tributes to the stuff we love,” says Marler. “…If you feel a bit nervous the first go around, you definitely don’t have to feel intimidated into participating. We are just a group that wants to share these kinds of skills and get people interested in this community.”