Marty: What a trip up to the crash site is like 50 years later 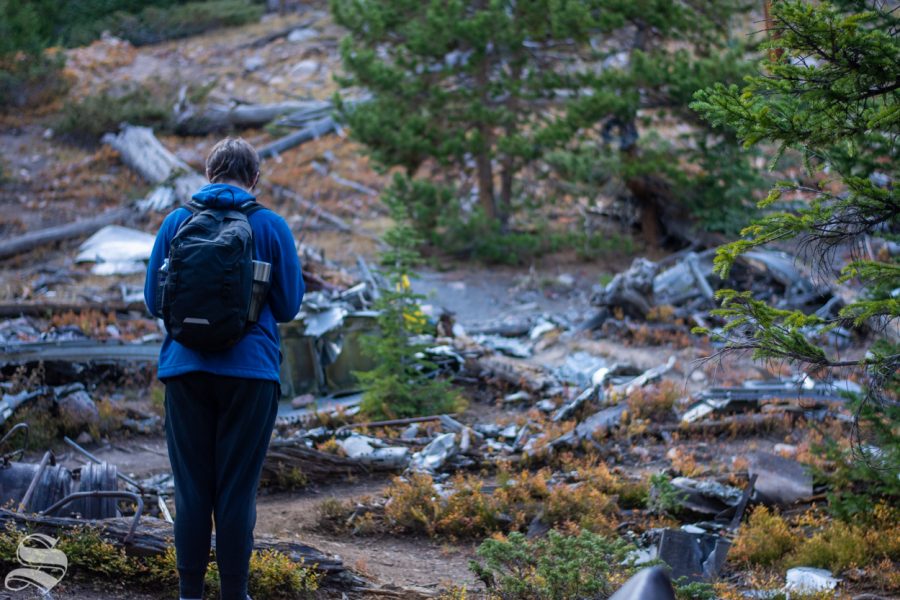 Sports editor for The Sunflower, Sean Marty, observes the 1970 Wichita State plane crash site on Sunday, Sept. 27 near Silver Plume, Colorado. 50 years ago, WSU's football team was flying through the Dry Gulch when the plane crashed into the side of a mountain on Oct. 2, 1970. 31 out of the 40 people on board were killed. Pieces from the crash still remain at the crash site.

One weekend ago, two members of The Sunflower staff got to visit the site where 29 people lost their lives and two others died in the weeks following. I had some expectations of what the trip would be like but being on the actual site was nothing like I ever imagined.

The plane crash site sits on Mount Trelease near Silver Plume, Colorado. On Saturday, Sept. 27, we made the hike up the mountain to go visit the remaining wreckage. For those hoping to see the site, it is something that you must be well prepared for.

The hike was very uphill and throughout the process, we took several breaks until we ultimately reached the very important left turn where a pile of stones lay. For those interested in visiting, this turn is crucial as if you miss this left turn, you will also miss the crash site.

Despite being unsure of ourselves, we took the left turn and after hiking more we ultimately reached the site of the wreckage. Once you reach the wreckage, it almost startles and surprises you. After 50 years, it’s amazing to see all the parts of the wreckage that have been left over time.

It was an eerie feeling when we arrived at the wreckage. It was almost like we didn’t fully grasp how to feel about what we were seeing. There is so much up there that we felt a sense of adventure and never wanted to leave. As the adventure sinked in, we had to stop a few times to remember just how many people lost their lives at that exact location 50 years before.

I was scared to move anything while exploring through the wreckage. The site simultaneously felt like a cemetery and a memorial. As we were looking through the pieces of the plane, we saw different types of buttons and pins that were left for victims who sadly passed away that day. We left with an overarching feeling of sadness.

It made me start thinking about how people came off the side of this mountain and survived this horrific incident.

Another feeling I got was the sense of weirdness. Throughout the hike up to the mountain, we could hear the sound of cars passing by on Interstate-70 but once we arrived at the wreckage those sounds came to a halt. We almost got a sense that the victims of this horrific event are there with you on the side of the mountain.

While we were up there, the Visuals Director Morgan Anderson took photos of all the wreckage and memorabilia that was left there even 50 years ago. While she took photos I was trying to take it all in while also taking notes of anything interesting that I saw.

The amount of wreckage that is still left on the side of the mountain is remarkable, especially with the different kinds of things that people have put up there over the years.

In my opinion, anyone that is interested in the history of WSU football or WSU sports as a whole should visit this site before the wreckage may be gone completely.

The opportunity to go up and visit the wreckage was something that I’ll never forget. Being able to share and capture these moments in WSU’s history was such a vital experience of my journalism career. I’m hopeful that I will get further chances to continue to shine a light on these moments throughout the history of the university.