‘I want them to be heard:’ Shockers Vote! Coalition aims to encourage young people to vote 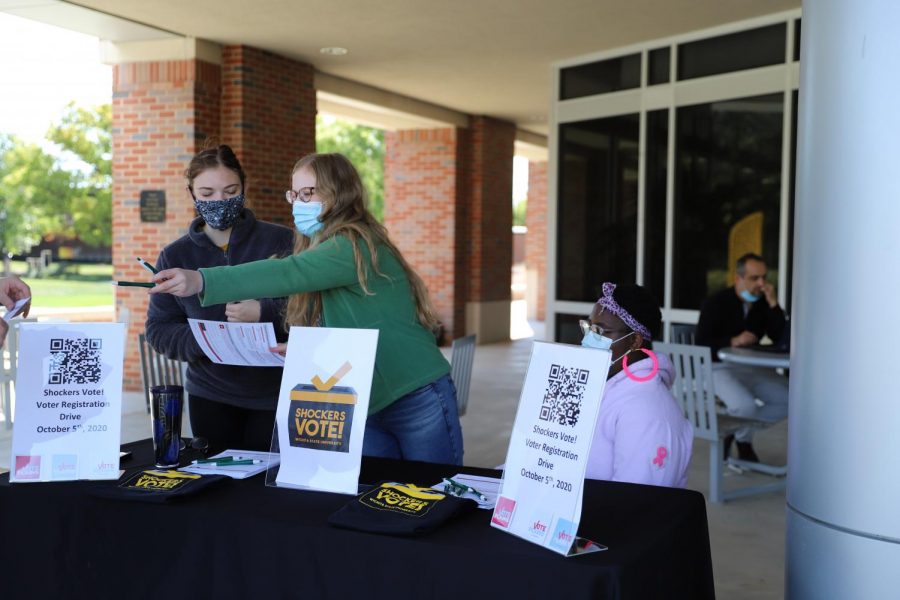 With election day quickly approaching, community members are encouraging others to register to vote. Wichita State is joining in on the conversation with the forming of the  new Shockers Vote! Coalition.

The coalition began with the Assistant Director of Student Involvement Gabriel Fonseca. He noticed the absence of voter engagement and election work on WSU’s campus, and felt that the university missed an opportunity to educate its students on the importance of voting.

“The biggest thing was that we wanted to create a culture of voter and election engagement on campus, reestablish the joy of voting instead of people feeling like it’s a chore, and providing opportunities for educational discussion,” Fonseca said.

Ella Perkins, the chair of SGA’s Government Relations committee, said that a big population of eligible photos are not exercising their right to vote.

“That is a huge population of voters who are just not engaged in the political process because they vote at the lowest rates,” Perkins said.

Perkins said that there are many ways for students to get involved with voting, like engaging with representatives and attending community advisory board meetings.

“It’s extremely important for students to be involved in voting because people are making decisions every single day on your behalf,” Fonseca said. “I want them to have a chance to question candidates and make their voice heard and cast their vote for who fights for them and what is important to them.”

Fonseca said that he wants WSU to become a permanent voting site in the general primary election.

The Shockers Vote! Coalition, partnering with the Intercollegiate Athletic Association, is hosting an early voting site at Charles Koch Arena on Oct. 22nd from 10 a.m to 7 p.m.

“We chose Charles Koch Arena simply because it is large and we wanted to provide social distancing space to ensure people could be safe when they went to vote,” Fonseca said. “Hopefully with the agreement we worked out we will be able to continue using this site for future elections.”

Fonseca said he also wanted to make sure students didn’t have an excuse not to exercise their voting right. By providing a place on campus, students don’t have to go out of their way to find a polling place.

Perkins said she hopes the coalition will inspire more people of color to vote.

“I’m really passionate about this,” Perkins said.  “Young people of color are the demographic that is the least engaged in political processes which I find incredibly unfortunate.

“We are a population that has a lot of power if we are properly engaged and get involved in the political process.”

If students are interested in getting involved in the Coalition, they can contact Perkins at [email protected].

After the November election, the coalition is planning on putting out a call to action for anyone on campus who wants to get involved.  To keep up with future events, students can follow them at Shockers Vote at Wichita State University page on Facebook.

Fonseca said that it is important to take away the mindset that just because someone is young means that their opinions aren’t valid.

“I recognize the apathy of politics in young people, when they talk about if their vote counts or they don’t know how to get involved,” Fonseca said. “For me, I’ve heard it for so long and I haven’t done anything about it and it’s become a personal mission to help young people feel as passionate as I do.”