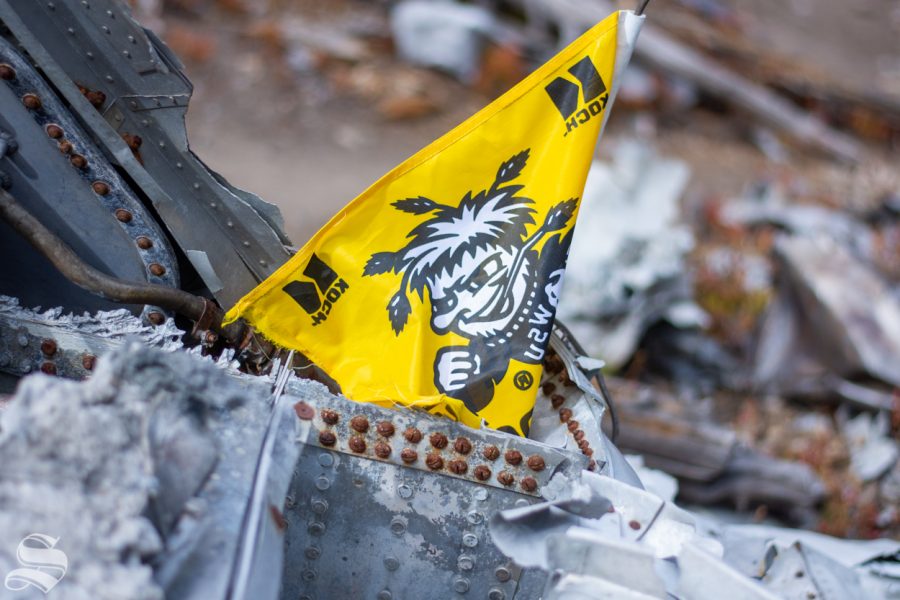 A Wichita State flag sits atop a pile of twisted metal remains from the 1970 WSU plane crash near Silver Plume, Colorado.

As a student at Wichita State, Jeremy Hubbard was completely unaware of the 1970 plane crash. Now as a news anchor, KDVR and KWGN in Denver, Hubbard recently published a documentary called “Overshadowed: The Wichita State Football Plane Crash”.

Hubbard said he didn’t know much about the crash besides the memorial on campus and became fascinated as he got further on into the project.

“Once you find about how random it was and whether you lived or died depending on which plane you hopped on that day if you were a Wichita State football player,” Hubbard said. “It was fascinating to me. Despite the decisions that were life or death for the team members, boosters and the coaches.”

Hubbard was inspired to produce the documentary after talking to former Wichita State football player John Yeros who was on the other plane the day of the crash. Over the years Yeros had suggested that Hubbard join him in visiting the crash site. Hubbard felt it was the right time to create the documentary after reconnecting with Yeros.

“I thought this is definitely the time to do this story,” Hubbard said. “We set out to do it and I had no idea how impactful not just for me but all the others that were involved.”

As part of the documentary, Hubbard along with family members and survivors of the crash climbed up the mountain where the plane crashed. Hubbard said he was surprised to see how much wreckage is still there after being there for half a century.

“I think they see it as hallowed ground for the guys that were killed in the crash,” Hubbard said. “It was really touching. I had heard about the wreck site and I knew people who hiked to it before and they said ‘yeah, there’s still lots of pieces of this plane up there’.

“I had no idea until I got there how much is still on the side of that mountain. It’s really something to see.”

One of the messages that Hubbard hopes the audience takes away from the documentary is the amount of people that were affected by this tragedy.

“I think it’s important to remember it’s not just the guys from the football team, the deaths were tragic,” Hubbard said. “They were teenagers, a lot of them. It’s horrible their lives ended this way. There were a lot of other people on that plane that were a part of the DNA of Wichita State who went down on that plane that day that are often forgotten about.”

One of the main things Hubbard addressed throughout the documentary was how overshadowed the crash was over the years. Just 43 days following WSU’s crash, Marshall University’s football team had a similar tragedy which stole the headlines.

“I guess just the sheer number of people killed in that crash stole the headlines from Wichita State but I just want to make sure that fifty years later we do remember the darkest day in our university’s history and the people’s lives who were forever changed by it,” he said.

Since putting out the documentary, Hubbard has been shocked at the outpouring of support especially coming from family members of the victims. Hubbard has been happy to reach so many people and tell the story of the crash.

“Obviously the goal when you put together something like this is to have as many eyeballs view it as possible,” Hubbard said. “I didn’t have any idea that there would be this many people watching it. Honestly, I don’t know if I’ve ever had a reaction to a project that we’ve done quite the reaction we’ve had to this Wichita State special. I think it shows you the level of interest there still is in this crash even though it happened 50 years ago.”