Stephens to honor his fallen teammates through bike ride to Colorado 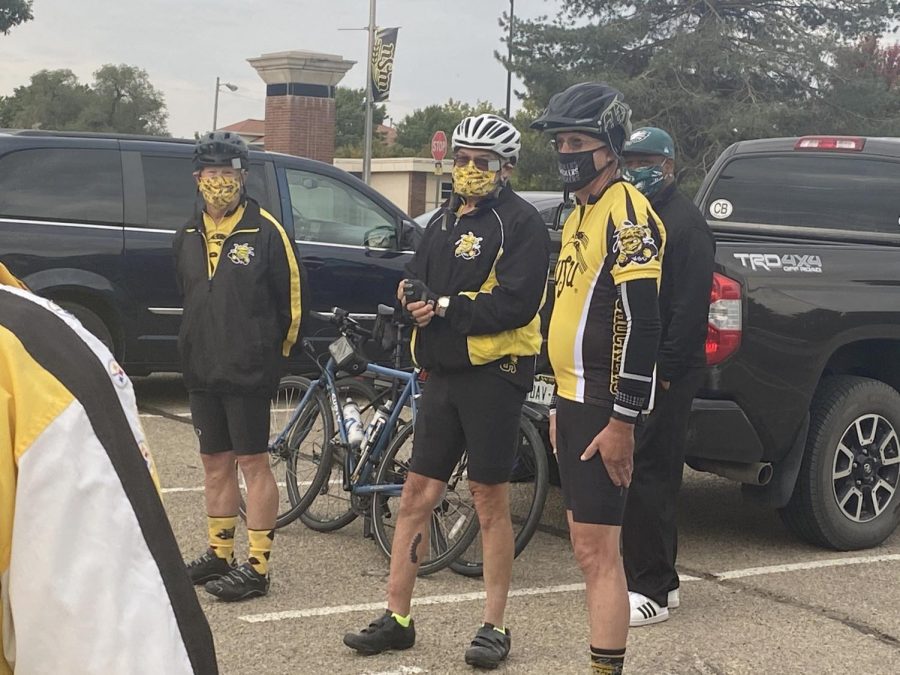 Paul Harrison, Kelly Harrison and Rick Stephens address the crowd at the 1970 plane crash memorial on campus before leaving on their eight-day bike ride to the plane crash site near Silver Plume, Colorado.

Plane crash survivor Rick Stephens has been honoring his late teammates in a creative way. Stephens and two others are bike riding from the memorial all the way to the crash site near Silver Plume, Colorado in honor of the 50th anniversary.

Stephens, a former Wichita State football player, recalls traveling to Logan, Utah for a game about Utah State. Originally, the plane had to stop at Stapleton Airport in Denver due to an issue with the hydraulic hose that was resolved.

WSU was traveling with two planes to the game but both took two different routes to get to Logan, Utah. Only one would arrive safely.

Stephens remembers noticing that the plane wasn’t gaining much altitude and even entered the cockpit and saw the pilots in an urgent state of chaos.

“I got up out of my seat, went to the cockpit and saw the pilots in a state of urgent chaos, trying to figure out how we could make it over 14,000-foot elevation,” Stephens said. “It was very impossible to do that. I realized something was amiss, something was wrong. I fell to the floor, I remember trees being clipped by the wings and after that the next thing I remember is waking up outside the aircraft quite the distance away from the airplane.”

Unlike the “Black” plane, the “Gold” plane decided to fly over the Continental Divide which was the fatal mistake that resulted in the crash near Silver Plume, Colorado.

“Our plane decided to go straight over I-70 to Loveland Pass which was the ultimate mistake that caused the accident,” Stephens said. “The plane was overweight, they should’ve been aware of that and they didn’t follow the flight plan. There were a lot of questions about how the flight was conducted.”

As a result of the crash, 29 people were killed on the scene and two others died in the weeks following the crash. Stephens was one of the nine survivors from the crash and only escaped with some burns and broken bones.

For Stephens, the crash has the biggest impact during this time of the year when the anniversary nears.

“At this time of the year, I’m constantly reminded of tragic events that happened,” Stephens said. My injuries were not serious or life-threatening. That’s the great sadness of it. My life has gone on, I think fairly productively as a teacher for 30 years in the public school system.

Stephens has gone on bike rides to the crash site recently in hopes of keeping the memory of this tragic event alive.

“I’ve tried to keep the memory of this event alive over the past ten years doing some fairly extensive bike riding to raise money for the Memorial scholarship,” Stephens said. “I’ve had some physical problems due to injuries but nothing’s that prevented me from living my life.”

Over the years, Stephens has gone on five bike rides in total to raise money for the Football ‘70 Memorial Scholarship which was put in place in honor of those who died in the crash 50 years ago.

With it being 50 years since the plane crash took place, Stephens said that it’s difficult to realize that half a century has passed since the tragedy.

Stephens said this trip will be special knowing that it could be his last trip up.

“There was an outpouring of grief and support from the community and the sports world in general,” Stephens said. “I think this a special one myself included as it might be my last hoorah. The university has been very good about paying tribute to the survivors, those who lost children, brothers, sisters, dads, moms. They’ve been good about doing that.”

Stephens’ bike ride will begin on Oct. 3 and will arrive in Silver Plume, Colorado on Oct. 9 before heading up on the mountain the following day.