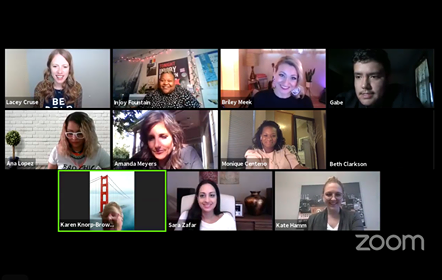 The March for RBG on October 2 brought people together from Wichita and beyond to celebrate and commemorate the life of Supreme Court Justice Ruth Bader Ginsburg. The online March for RBG was streamed live because of concerns about safety and the spread of COVID-19.

Kansans came together to honor the late Supreme Court Justice Ruth Bader Ginsburg during the March for RBG on Saturday. Nine speakers presented calls to action and reflections on Ginsburg’s life and legacy, including speakers who are members of the Wichita State community.

Commissioner for the 4th District of Sedgwick County and WSU alumnus Lacey Cruse said the March for RBG organizers chose nine speakers so people would remember the nine seats on the Supreme Court. The March for RBG was streamed live online because of concerns about safety and the spread of COVID-19.

“I was amazed at how human she was,” Zafar said.

She said that though Ginsburg was small in stature, she made others feel tall.

“Justice Ginsburg made it her life’s work to lift up the underrepresented and oppressed to make us all feel taller,” Zafar said. “She dedicated her work toward leveling the playing field for everyone creating avenues for equal access and eliminating disparities.”

Zafar said it was essential to honor Ginsburg’s memory by continuing her work, especially in this election year. She encouraged people to take the time to learn which political candidates were lifting up Ginsburg’s work.

Danielle Johnson, Assistant Director Office Diversity Inclusion, said she was there not only to speak to the importance and the memorialization of the “Notorious RBG” but about the importance of showing up and walking our talk.

“In the words of the Notorious RBG, women’s rights are an essential part of the overall human rights agenda trained on the equal dignity and ability to live in freedom. And people should enjoy that,” Johnson said. “We are filling the shoes of giants, folks. We have experienced losses this year both in our personal walks and lives, our own networks, to some of the greats. And we have a responsibility to show up and show out. That is our call. Walk our talk.”

Amanda Myers, the executive director at the Wichita family crisis center, spoke about Ginsburg as a Jewish woman.

“She was raised as a Jewish woman. One of the paramount tenants of Judaism, which is Tikkun Olam, is our obligation to repair the world,” Myers said. “

Myers said as the daughter of a Jewish mom, the wife of a Jewish husband, and a woman raising two Jewish men, she recognized the importance of Tikkun Olam. Ginsburg had a patient quality, a long term strategy and boundless imagination for a just world, she said.

“Her genius quality dissents were not crafted to tell her fellow justices that they were wrong, but rather to teach us as the next generation how to get it right. How did she do that? She cobbled together small victories palatable to the public and palatable to the court. And then she built on them over time,” Myers said.

Community Services Representative for the City of Wichita, Ana Lopez, spoke about Ginsburg’s legacy for immigrants.

“Ruth Bader Ginsburg repeatedly pointed out that more than 20 million current citizens were born in other countries. I am one of those citizens,” Lopez said. “I come from humble beginnings. I was born in Mexico and raised here in Wichita, Kansas.”

Lopez said she’s been blessed to be able to shape and create spaces for residents, especially for those in the Latinx community. She said a record 32 million Latinos are eligible to vote, and she wants them to register to vote.

“We have to fight for the things that we truly care about,” she said. “I do have a call of action for everyone, whether you speak English or Spanish, and that is to register to vote. You have until October 13,” she said. “It’s important that we elect the proper candidates to represent us.”

“It’s very important that we elect those who represent us, as minorities, as women, as residents of this country. We need to make sure that we are electing the proper candidates to represent us and in all of the aspects that affect us,” Lopez said.