Behind the scenes of Stadium’s investigation into Gregg Marshall 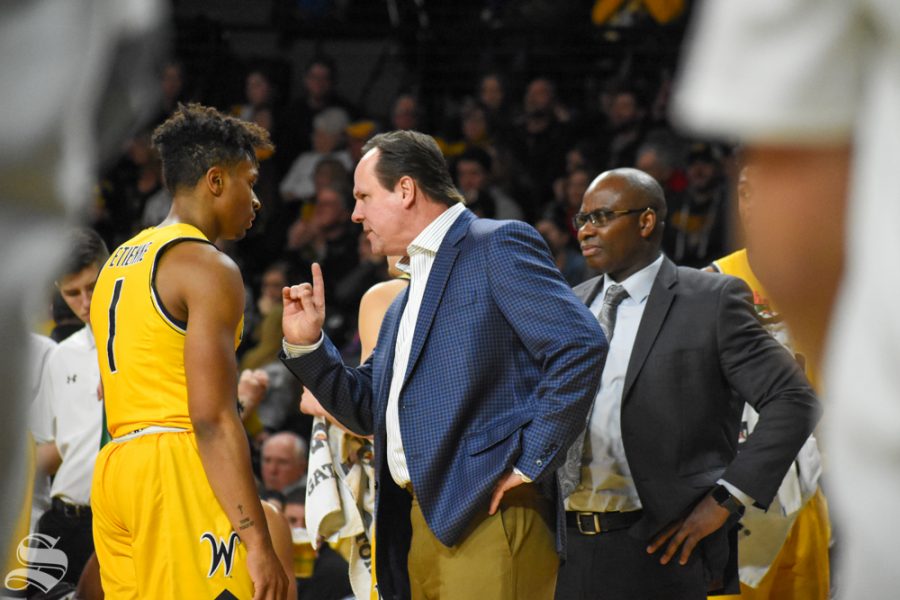 Head Coach Gregg Marshall talks to freshman Tyson Etienne during a timeout of the game against Abilene Christian on Sunday.

Goodman has tracked transfers across the country for the past 20 years. Goodman most recently worked with ESPN before joining Stadium, a multi-platform sports network. He said that at one point WSU had the most transfers in the country, which was strange considering that the program was on the cusp of returning to the NCAA Tournament.

As Goodman started getting in contact with former players, he learned stories about what had been going on inside the basketball program. Despite having more than 36 players at one point come to him in off the record interviews didn’t feel comfortable with publishing the story without someone going on the record.

Goodman said the story was the result of his six month long investigation.

“I just took my time on it, didn’t rush it and then ultimately had everybody in place and the one thing I didn’t have was somebody to go on the record,” Goodman said.

Goodman said that former center Shaq Morris approached Goodman and told him he would be willing to go on the record for an interview. Over a six week period, Goodman checked in with Morris weekly before he finally decided to go on the record.

“I just felt that this is such a big story and I’ve done stories of this nature before that you want to make sure that you’ve got it as airtight as you can,” Goodman said. “You don’t want to potentially ruin somebody’s career without having as much information and talking to as many people and making sure. That’s what I did.”

One of the major allegations against Marshall was that he punched Morris during a 2015 practice. Goodman was able to have seven players from the practice to confirm the allegations brought forward. Both Morris and Ty Taylor II went on the record for the story.

Goodman said that some of the players were less willing to go on the record because of the possible backlash they could face.

“[Players] talked to me but were scared to go on the record because, let’s face it, a lot of them are fearful of what the Wichita State fan base and community is potentially going to say and do to them— especially if Gregg Marshall keeps his job,” he said.

Throughout the process, Goodman said that he remained focused on doing his job to the best of his ability.

“I don’t have any vendetta against anybody,” Goodman said. “I’m just doing my job. I try to be honest and forthright, try to do my job the best that I can. Everyone says that you’re biased. I’m not biased at all.

Some of Marshall’s former players have come out in support of him on social media but all were there prior to the 2015 season. Goodman said that he has respect for Marshall as a coach but that he should change his coaching methods.

“I’m not saying he’s not a good x’s and o’s coach and he didn’t do well in developing some players,” Goodman said. “I’m just saying there are a lot of people that I talked to, a lot of players question his methods and question whether it was personal. Do you have to be that way? I would say no.”

WSU released a statement Friday to address the articles published about the investigation. WSU confirmed that an investigation was taking place and acknowledging the allegations brought forward.

Goodman said that many of the players he interviewed for the story have not taken part in the university’s investigation and felt the investigation couldn’t be trusted.

“They felt that it was still a Wichita investigation and that Gregg Marshall was reaching out to some players right before the investigator reached out and basically, asking them to say good things about him, to come to his defense,” Goodman said. “I don’t know the specifics of it whether he wanted them to do it publicly on Twitter or through this investigation, I’m not sure.

“They just didn’t know whether to trust this investigation was going to be fair or if it was slanted towards Gregg Marshall. Most of them that I talked to didn’t speak to the investigator.”

Now that the information is out in the public, Goodman said that it will be crucial that the investigation talks to players from the 2015-16 season since that’s when the primary incidents took place.

“So if I’m the investigator or the law firm to me in order to do your due diligence you should be reaching out to every single player and it’s not that hard because I got a hold of most of them.”

The story has been updated for timeline clarification.