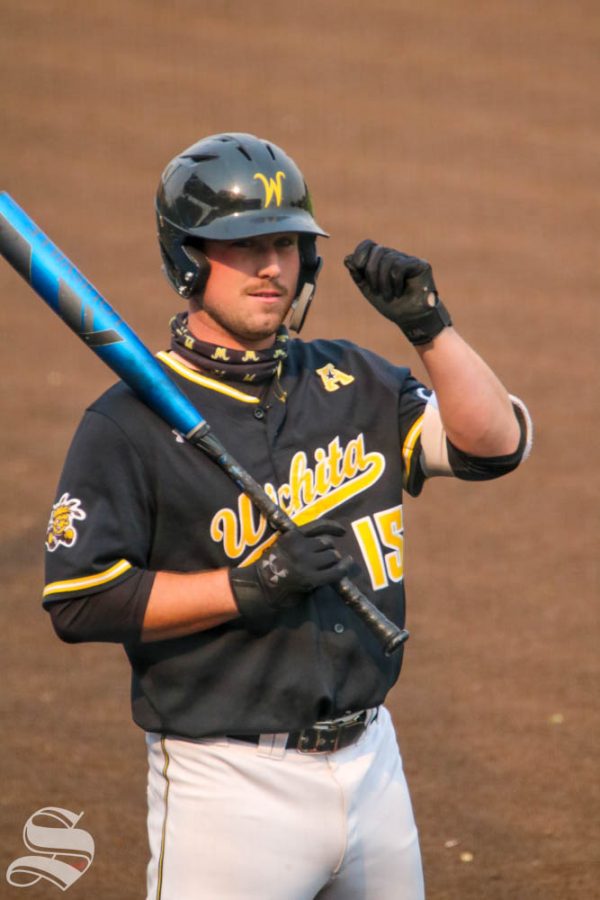 Wichita State junior, Paxton Wallace gets ready to bat during a scrimmage at Eck Stadium on Oct 17.

Just like the Wichita State baseball program normally does, they concluded their fall season with the Fall Series this past week. The Black Team was victorious in the five-game series winning four of those games.

In those four games, the Black Team outscored the Yellow Team 34-28.

Although the Fall World Series is the typical way for the program to end its fall season, this fall season has been anything but that. During much of that time, they weren’t allowed in the locker but head coach Eric Wedge said that improved leadership has been a key factor in making this fall a successful one.

“I feel like they’re comfortable yet they’re even more hungry too, Wedge said. “Not being able to utilize that locker room was tough for us because that’s where you build a lot of camaraderie. I think they’ve done a great job whether it be in the dugout, outside the field, particularly on the field, doing a much better job of holding each other accountable as well.”

This offseason, the Shockers were able to bring in 18 newcomers with 14 of those being high school recruits. Wedge said that he has been pleased with the group’s focus on improvement which will be key down the road.

“Everybody got better for the most part,” Wedge said. “The guys that are coming back have been here before, have pretty much lead the way on and off the field and the younger kids have learned a great deal in a short period of time. We’re going to have options both from the older kids, we’re also going to have options from the freshmen kids coming in.”

Prior to the cancellation of the 2020 baseball season, the Shockers had a 13-2 record along with a 13-game winning streak. As one of the returners from the team last year, infielder Jack Sigrist said that everyone’s improved which will only help them get better as a team.

“ We’re in a really good place, right where we want to be,” Sigrist said. “So, just continue to build off and grow off that and continue to become closer friends even though we’re already super close. And just continue to roll like we were doing last season is only going to make us better in the spring.”

Unlike many over baseball programs in the American Athletic Conference, WSU has been active throughout the fall season which Sigrist sees as a big advantage for this upcoming season.

“They were saying that we’re one of the only teams in the conference that have been doing much and we just wrapped up practicing for six weeks pretty much every day,” Sigrist said. “I think that’s a huge advantage when it comes to the uncertainty we’re facing every day. It’s definitely going to help us in the long run that we’ve been able to do all this.”

From the perspective of junior starting pitcher Liam Eddy, he said that the Fall World Series will be a key for newcomers especially to see if they will be able to handle the pressures of the big moments.

Overall, Wedge said he was pleased with the performance of the program and feels it can make an impact moving forward.

“It always makes an impact,” Wedge said. “It’s how we finish off the fall. It’s very competitive, they’re into it, both teams want to win which is the way it should be. It’s nothing like playing someone with a different uniform on. It always finishes off well if they do it right and they did it right.”