Offense takes a step up at Shocker Softball scrimmage 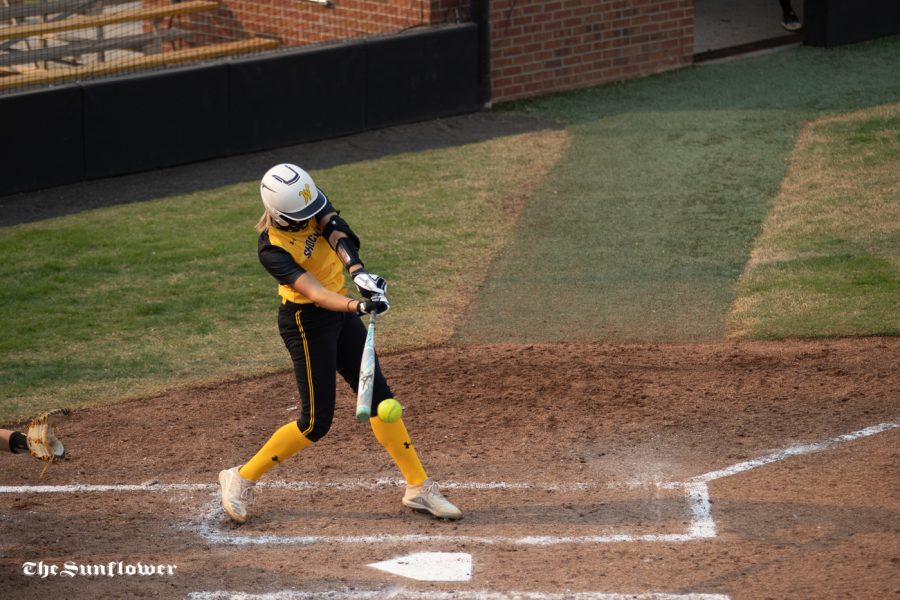 Wichita State freshman Jessica Garcia hits the ball during the scrimmage at Wilkins Stadium on Oct. 17, 2020.

In the sixth Black and Yellow Scrimmage of the season, the black team took the victory, 11-9, on Saturday.

Two weeks ago, the takeaway from the scrimmage was that the pitchers and defense played their hearts out. The black team was victorious in the seventh inning after a homerun, courtesy of Lauren Mills, who secured the win at 2-1.

It was a competitive game throughout, until the final inning. In the first inning, the black team hit two homeruns, courtesy of Lauren Mills and Hailey Martinez. Those hits and a few outfielding errors brought the score to 6-0 at the half inning.

Going into the fourth inning, the yellow team was trailing by five runs, but a three-run homerun from Madison Perrigan helped to close the gap. Inning by inning the yellow team chipped away at the black team’s lead, until it was a tie ballgame at 8-8 by the fifth inning. The black team kept the offense rolling though, and they came out on top by two runs.

Head coach Kristi Bredbenner said that she liked what she saw from her team, although she believes there is still room to improve.

“Today wasn’t the pitcher’s day, it was definitely the hitter’s day, especially with the way the wind was blowing out,” Bredbenner said. “But you know, we’re going to have days like that. We’ve got to figure out how to keep the ball in the ballpark.”

Bredbenner also said that the eleven walks were a concern but was pleased with the competitive nature of the scrimmage.

“So, obviously you’re going to get yourself in a little bit of trouble when you’re walking that many throughout the game,” Bredbenner said. “But the biggest takeaway for me is just seeing our kids out there competing, learning what we need to keep getting better at and hopefully getting those competitive juices flowing for whenever our season starts.”

Overall, Bredbenner said she has been pleased with the progress of the team since the start of these scrimmages.

“All around we’re improving,” Bredbenner said. “We’ve got a couple of areas we need to see some steep improvement in and I think defense is one of them. We make some mistakes that we shouldn’t be making on routine plays so we’ve got to clean that up a little bit, but I think that’ll be something we do in time, but I definitely think our offense has been the biggest improvement.”