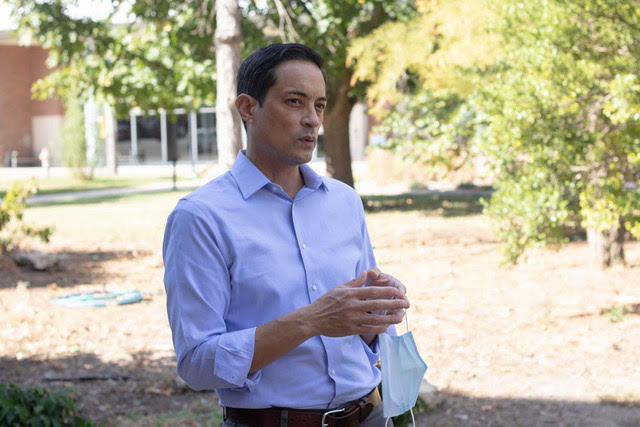 Philosophy Chair Noell Birondo answers questions during an interview with The Sunflower on Wednesday, Oct. 14 behind Elliott Hall. Birondo teaches a Philosophy of Feminism class at Wichita State.

“I’ve been thinking about gender my whole life because before I was a man I was a boy, who was sometimes mistaken for a girl,” Birondo said. “That’s the kind of reaction I’ve been getting my whole life, so I’ve always thought about what is gender, and the relationship between gender and biological sex and sexuality.”

Birondo said he often reflects on the social structures that impact the way that men and women are supposed to move, dress, talk, and ultimately act.

He also questions why women are greater targets of violence compared to men and why women have to walk around in fear.  These are the main topics that drive his philosophy practice and teaching.

“Feminism, as I tend to think of it, is kinda like anti-misogyny,” Birondo said. “Thinking of it like that, it’s always been a little bit of mystery to me why anyone would be against feminism.  It’s against the subordination of women, and it seems like something everyone would be on board with.”

Birondo said feminism and anti-racism movements have similar goals. He said that feminism is important in today’s society because women face disproportionately difficult challenges in the workplace, childcare, reproductive access, and health insurance.

“The system creates problems that some people don’t have to worry about that are prominent in women’s lives,” Birondo said. “We don’t have enough quality, affordable healthcare for women, which any woman would tell you is an important issue, but the people who write up laws and craft HR policies tend not to be women.”

Birondo said when young women are able to see themselves represented at a high level, they know that they can reach for that too in their own lives. Birondo said that this is why it is important for women to be put in positions of power— such as lawyers, university presidents, business leaders, and Supreme Court justices.

The skill of critical thinking, a sense of self-understanding of their own lives, and empathy to be able to understand the point of view of others are the three main points he wants students to take away from his classes. He engages his students by creating a conversation instead of a lecture, having his students turn in questions which they then talk about in class as a group.

“I don’t hide from students that of course I want them to learn as much as they possibly can, but I am also learning from them,” Birondo said.  “They have something to say and contribute to the topic and their experience is relevant to other classmates … I only have one perspective so we are going to learn from each other.”

Birondo said that even though he didn’t grow up as a girl and does not face the same problems that women face, he has learned from feminism philosophy how important it is to learn from the perspective of others.

“I think it’s quite wrong if people assume that as a man I shouldn’t be teaching a feminism class,” Birondo said. “I’ve worked really really hard over the past five years to get up to speed on the current work being done in the philosophy of feminism, like going to national conferences and interacting with prominent feminists all over the country.”

Birondo said that one of the most encouraging things to him in the Black Lives Matter movement is seeing people support the movement who are not the target of racist sentiment and systemic racist policies.

“They are stepping up and saying that it’s important that we all live in a society where everyone is equal,” Birondo said. “That’s how I think about feminism … it should be a concern to everybody and the hardest part is that it’s not.”

Outside of teaching, Birondo said that he does a lot of research on the philosophy of virtue, or virtue ethics, which focuses on ethics from a point of view of what qualities people have and what qualities they desire in their own children.

He has been busy the past two years writing a book about hate for a collection of books about emotions.  The collection of chapters are written by authors all around the world.  He is also interested in Latin-America philosophy from his travels there and is writing a book on that as well.

Birondo said that he has enjoyed teaching at WSU for the past seven years. Some of his best students he has worked with have been here at WSU, even compared to some of the very selective private institutions he has worked at across the country.

“WSU is the highest quality, most affordable university in the state of Kansas,” Birondo said. “We have the best faculty and best programs at the lowest cost, hands down.  The price of education is really affordable so we get lots of really great students.”