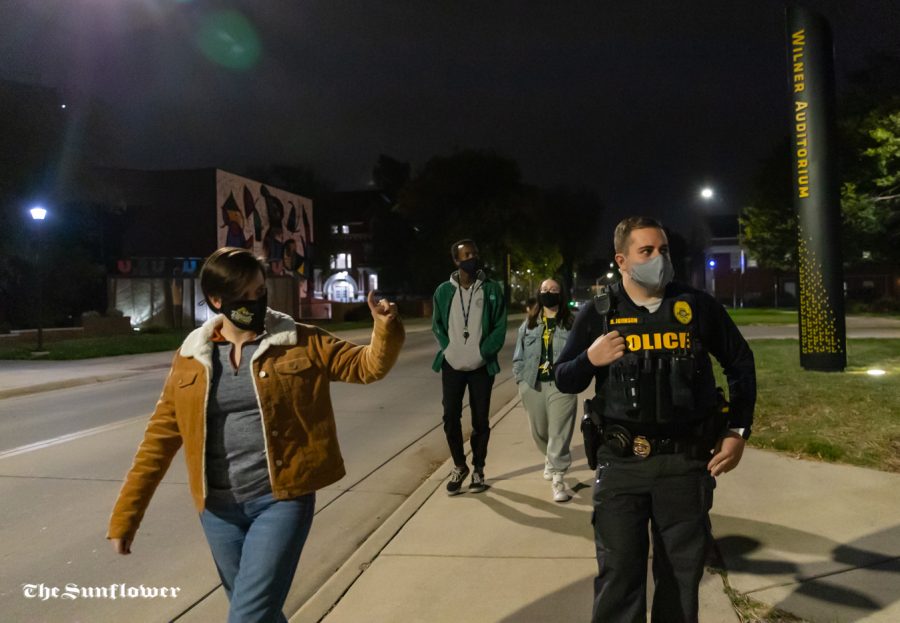 Sergeant Johnson from the University Police Department and senior Olivia Babin point out broken lights during the Safety Walk around Wichita State campus on Oct. 20.

The sound of quiet footsteps and camera shutters filled the campus Tuesday evening as a group of students, led by a campus police officer and a member of Student Government, walked around the campus for the fourth annual safety walk.

Roughly a dozen students attended and were split up into four groups that were sent to different spots on campus to help document potential safety hazards.

Students scoured their areas of campus looking for areas that would raise safety concerns, like places not well illuminated or places that need crosswalks. Last year, the main concern was lack of crosswalks, this year the main concern was making sure light bulbs were replaced and keeping the campus well lit at night.

“I lived in The Flats for three years, and we walked around that area so I knew where maybe some lighting issues would be or an idea for a crosswalk there,” Student Senator Ariel Langenberger said.

Langenberger said the University Police Department was helpful and answered all of her questions regarding the campus and safety issues that could arise.

Students had the idea of  implementing more crosswalks on the east side of campus. Other students raised concern about proper traffic signs near a roundabout on campus.

“I feel pretty safe on campus, especially compared to my friends who attend other campuses and I feel good walking around the campus and making sure everything feels safe as best we can,” Langenberger said.

The organizer of this year’s safety walk was Grant Day, the Chairman of SGA’s Safety and Student Services Committee.  He said he was pleased with the outcome and felt good about the feedback he received from students.

“The biggest reason we do this safety walk is to create open communication between students and the safety committee as well as the University Police Department,” Day said.

Although some lights were out due to construction, the students did not voice too many safety concerns on campus.

“When you’re on campus, it’s a good way to produce new ideas on making the campus a safer place and have these things documented,” Day said.