‘We are the change:’ Students hold on-campus protest against impunity in Africa 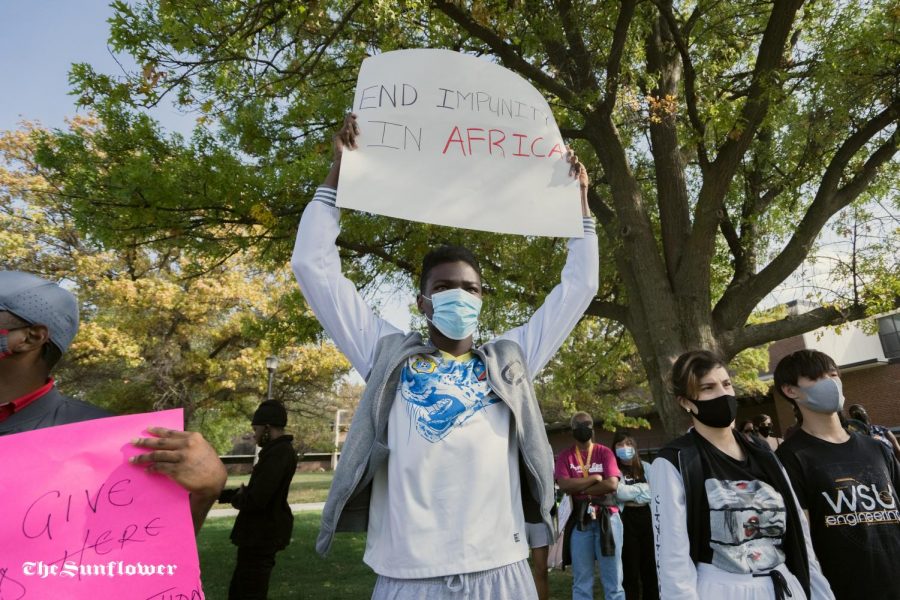 A member of the African Student Associasion holds up a sign during the protest.

Unity and peace was the overarching message members of WSU’s African Student Association brought to campus Thursday, Oct. 22 during their protest against impunity in Africa.

Students heard from a set of speakers in front of the Rhatigan Student Center before peacefully marching around campus.

The protest was to shine light on police brutality happening in Africa. According to protestors, bringing awareness to this tragedy is essential to its end.

“We aren’t talking about human rights anymore, we are just talking about the basic things we can offer to human beings,” student Aboubakar Diabo said during the protest.

Students from Nigeria, Congo, Zimbabwe, Ghana, and many other countries were there to spotlight their countries and bring awareness to their issues.

“It started as a Civil War, turned to a genocide, and now is a Holocaust,” Deborah Jolie, a WSU student from Congo, said.

Congo is one of the richest countries in Africa and is most known for its surplus of the mineral Coltan, which is used in all of today’s electronics. Many countries in the world are fighting for Congo’s land and the resources, but are sending in rebel groups to do the work. Protesters said this has caused many to lose their lives.

Jolie said other countries are getting Africans to kill other Africans.

“The white man is behind the whole thing,” Jolie said. “People are dying.”

Jolie has family in Eastern Congo and is in constant contact with them to make sure they’re safe.

“They had to evacuate to go into safer places,” she said.

She said that even though she feels she can’t do much, she is doing all she can to help her family and the people of Africa.

Maryam Abdulkareem, a student from Nigeria spoke on the fight that’s happening in her home.

“People have died with our flag in their hand,” Abdulkareem said. “They can shoot you right then and there, and nothing is going to happen.”

Blossom Bolufemi, another native from Africa, also spoke at the protest and was overcome with emotion during her speech.

“They’re supposed to protect us,” she said. “You can’t take my family from me, we will fight.”

Goldi Mpunga, a native of Congo, spoke about the injustices that are happening in Africa such as murder and rape of women and children.

“I don’t know about you, but I say we stand up, and we show them,” Mpunga said to the crowd. “It’s not about being African, it’s about being human!”

Before the protest peacefully marched through campus, Diabo said a few last words.

“We are the change of Africa . . . it’s okay to speak out, to stand up and talk about what’s going on, but it’s another thing to take actions to see it change,” Diabo said.