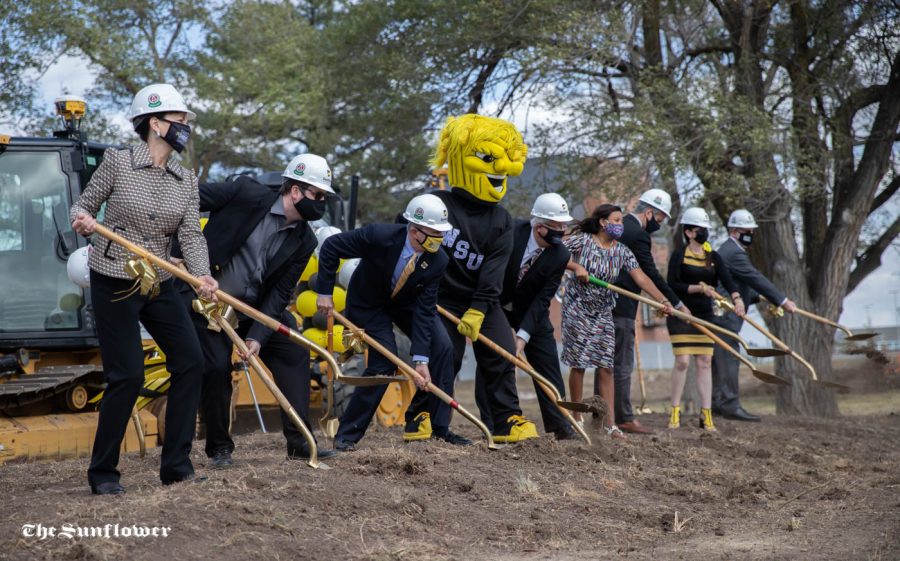 Attendees listened to a set of speakers before witnessing the official breaking ground of the new business building.

“It has been seven years that we have been doing the fundraising for this project as part of our ‘Shock the World’ campaign,” WSU Foundation President Elizabeth King said during her public address. “But it was many years even before then that the dream began, the dream of turning into a new facility that would better accommodate the needs of our business school students and future generations of students.”

The new building, named after donors Wayne and Kay Woolsey who donated $10 million to the campaign, will be located on Wichita State’s innovation campus and will replace the current business building Clinton Hall.

The WSU Foundation and partners raised $31.5 million through the fundraising campaign for the new hall. The remaining funds were paid for by the university.

Business School Dean Larisa Genin said that the new business building will not only help students grow in their work and passions, but will also serve as a resource for faculty and staff.

“Since that day that I started at Wichita State … it didn’t take me nearly that long however to learn some valuable insights about what I was stepping into,” she said. “I learned that the Barton School has an incredibly talented and committed faculty and staff who will flourish and achieve great things when they immerse themselves in an environment that champions their work.”

Business School Senior Sierra Brown said that she hopes to see the new hall serve as a good resource for future WSU students.

“When I think of Woolsey hall, the first word that comes to mind is opportunity, followed by innovation and impact,” Brown said.

Interim President Rick Muma said that he is looking forward to what the building means for the future of the university.

“I’m thrilled with the generations of students who will benefit from the first class facility you’re going to see in two years and you will be learning in,” Muma said. “I’m ecstatic for our dean, faculty and staff, who will be inspired and invigorated in a dynamic and energized environment where we will see them do their work.

“I’m elated for the university itself which is demonstrating with this project a commitment to excellence and a promise to invest in endeavours we know will bring distinction to Wichita State.”