Clubs and organizations you may not have heard of: Dungeons and Dragons Club 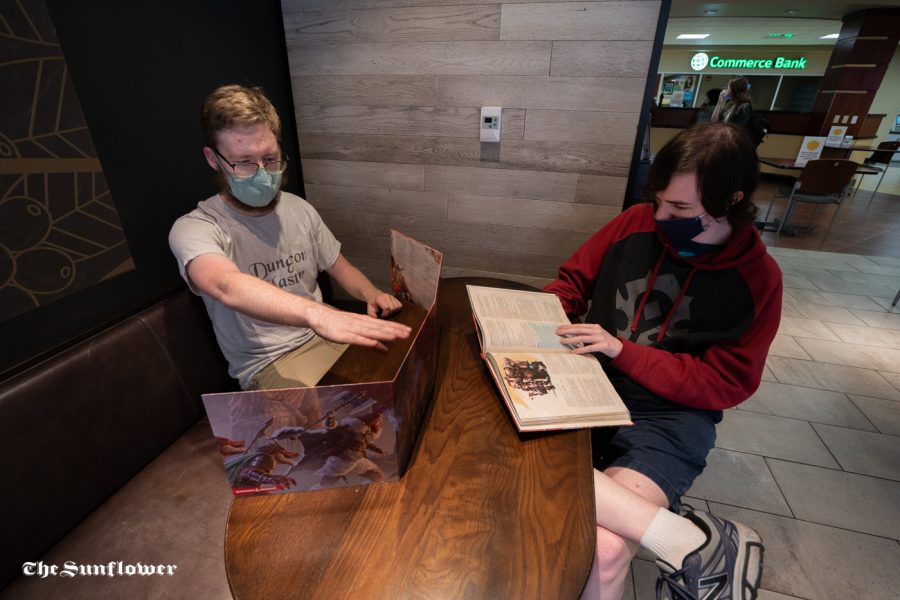 Eldon Taskinen (left) and Tyler Gardner (right) talk about the game. WSU's Dungeon and Dragon club was formed in the Spring of 2019.

Questing through a medieval fantasy land with a sword or staff in hand, ready to battle deadly foes, makes for the perfect Sunday night adventure―at least for WSU’s Dungeons and Dragons club it does.

Dungeons and Dragons is a role-playing tabletop game created in the mid 70’s. With only a short 40-year history, the game has gone through multiple editions, changes in rules and nomenclature, and has risen in popularity.

D&D is set in a medieval fantasy world where multiple players form a group and set on an adventure together. One player, called the Dungeon Master, leads the group through the storytelling.

President of WSU’s Dungeons and Dragons club, Eldon Taskinen, has been playing D&D since the 7th grade.

“I found the rule books and started reading them and thought ‘This game is so cool,’ so I went and found all of my friends and brought us all together and said ‘Let’s play this game,’” Taskinen said. “I’ve been playing ever since.”

To this day, Taskinen continues to play with the same group of friends.

Within the past decade, D&D has been featured in well-known TV series’ such as sitcom, “Community”, and Netflix Original, “Stranger Things”. As D&D enters the mainstream media, Taskinen says that he’s seen the stereotype around the game and its players change for the better.

“The original stereotype around Dungeons and Dragons is a whole bunch of nerds in their mother’s basement and [now] it’s evolved very far beyond that,” Taskinen said. “… With the addition of influencers in the media playing the game, we’ve seen huge spikes in people interested in the club and in the game.”

In fact, the number of WSU D&D club members has nearly doubled this semester, Taskinen said.

According to the rule books, each adventure, or game, lasts between two to four hours. But Tyler Gardner, Vice President of the D&D Club, says it usually lasts around six and can even take upwards to eight hours.

“So long as we’re out before midnight, I’m fine,” Gardner jokingly added.

The club used to meet at the Rhatigan Student Center, but have now transferred over to an online gaming format in order to comply with COVID-19 safety rules and regulations.

“We have a discord server where we run online games,” Taskinen said. “… It’s a long running game so we like to have snacks and drinks, and wearing a mask during the entire course of a five hour adventure would be very difficult.”

But playing online doesn’t come without its challenges.

“… People [tend to] behave differently online than they do in person,” Gardner said. “They have a tendency to talk over one another because they can’t see the physical cues of someone trying to speak, so it gets a little bit more chaotic.”

Taskinen and Gardner are hoping for the club to be able to meet in-person next semester.

“There’s a growing sentiment in our club that people want to see each other in person,” Gardner said. “Playing D&D in person is just a different experience than playing online.”

“The game is not nearly as complex as it looks. One of the nice things about D&D is that you can play it in different ways,” Taskinen said. “If you like playing by the rules you can go through the player’s handbook and play exactly by the rules. I, however, prefer doing more of improv with it. That’s how I like to think of a D&D game, is that it’s one big improv session.”

He says he introduces new players to D&D as a game fundamentally made up of three rules.

The club meets every Sunday at four p.m. through their Discord channel. If interested in joining, feel free to email them at [email protected]

“One thing that I appreciate from D&D a lot is that it is … as cliche as it sounds, it’s your game … when you play D&D with your buddies it’s you and your buddies game,” Gardner said. “You’re the characters, you’re the show, and there’s this level of personal attachment that people get that I think is really neat.”