‘We’re only playing against each other:’ Taflinger reflects on fall season with no matches 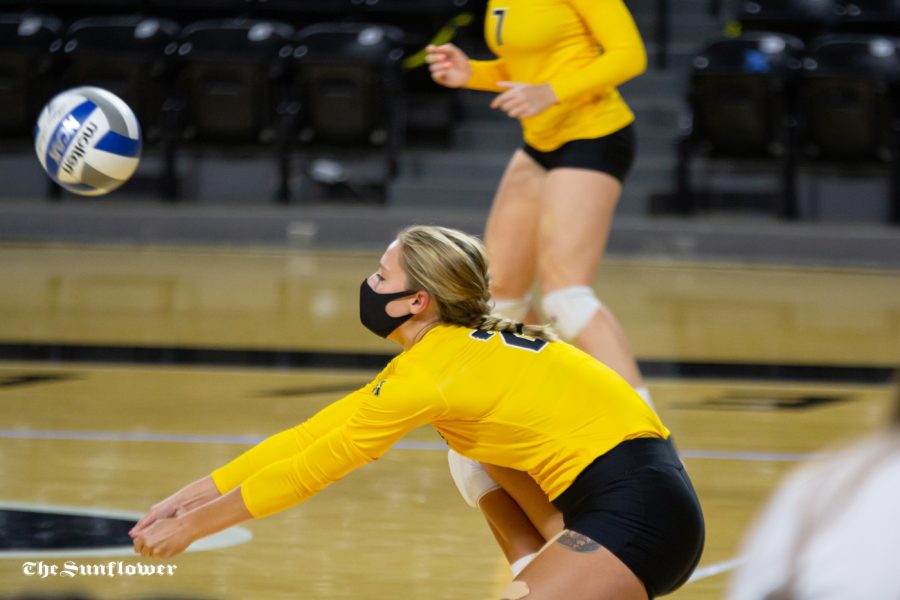 Wichita State redshirt junior Megan Taflinger digs the ball during the Black vs. Yellow scrimmage on Oct.1 at Koch Arena.

When the American Athletic Conference announced that the volleyball season would be postponed until the spring, redshirt junior Megan Taflinger, like others, was disappointed.

Wichita State has not played an official game since last November and Taflinger said she wishes that the conferences would’ve allowed them to play against another team.

“I understand that the AAC makes sure our health is the highest priority but it still would’ve been fun to at least have scrimmages or some sort of playing with or against another team and not just ourselves,” Taflinger said. “I think it was kind of a bummer that we had to know that we were only going to go through practicing without being able to play anyone but ourselves.”

Despite not being able to compete against any other program to this point, Taflinger still feels that the team has remained motivated throughout the process.

“I think the ability to play against other teams is to test to see how good of a team you are,” Taflinger said. “Our team has stayed motivated during this whole thing as well as our coaches. But it would be nice to play someone else to see where we’re at. We don’t really have any perception on that scale. We’re only playing against each other.”

With the program now having more time to spend on training, Taflinger said that it will be a good experience for some of the younger girls on the roster.

“They have the ability to go through a whole season where they get to learn how all of our plays and stuff that are run before competing and playing games that actually matter to our record,” Taflinger said.

This offseason, the program was able to add nine newcomers to the roster including eight high school recruits.

To this point, all eight freshmen have been able to fit into the team culture which has been beneficial for the program, as a whole.

“Our freshmen, they’re a really good bunch,” Taflinger said. “They kind of fit right into our whole program and into our team pretty easily. Having the time definitely has given the ability for all of our hitters to hit off the setters and that’s always a huge bonus to have that time to do that.”

As a result of the lack of games, the volleyball program put on three separate Black and Yellow Scrimmages with the final one taking place on Oct. 16.

Taflinger said that these experiences will be especially beneficial for the newcomers who might have never played in front of a crowd like in these scrimmages.

“I think it was more helpful for the newbies because they’ve never played on a scale or most of them have never played on a scale that big,” Taflinger said. “Then to play on the court that you hope to play for the next four to five years and then to play in front of people, our freshmen were definitely the most nervous. It was just fun to go and play in front of some people.”

She said that these scrimmages can also show the coaching staff which newcomers might be prepared to play in big matches and under some pressure.

“I think the coaches got to see how they play in front of a crowd, how they handle a little bit of pressure,” Taflinger said. “Just to see how they do under some pressure and I think it was pretty beneficial to do something different than just practice every day.”

Currently, the program is preparing for its season to begin in the spring but Taflinger said there are still question marks for the upcoming season.

“I’m ready for the spring season to be here, all of it still on a hold and making sure the athlete’s health is still a priority,” Taflinger said. “If it gets worse or if anything happens in the months that we’re off, the AAC I’m sure will take action. It’s never a sure thing that we’ll have a season this spring but I’m definitely ready and I know my teammates are ready to compete against other people.”