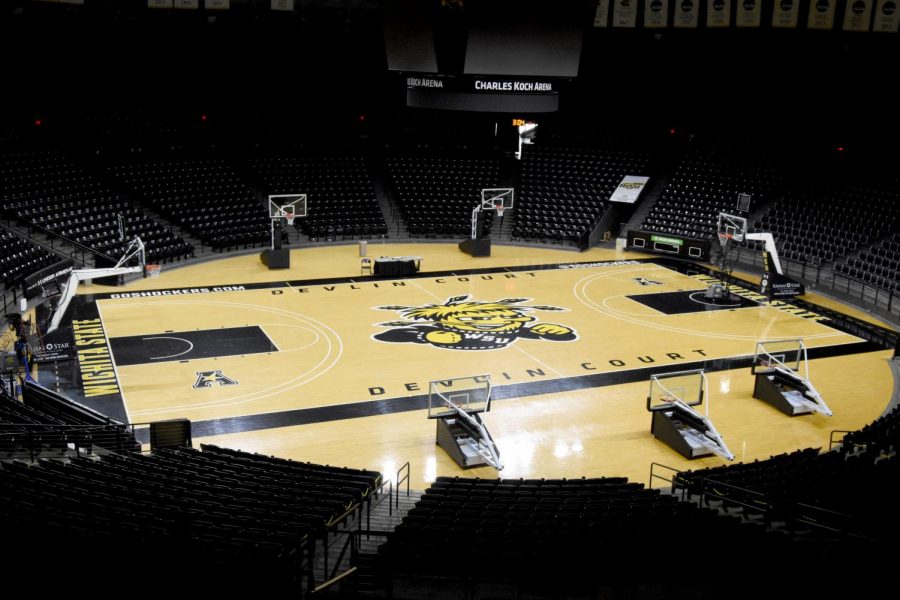 Koch Arena sits empty on Friday. Much uncertantity still surrounds sports this year, including whether or not fans will be able to attend.

Given the uncertainty that remains for the upcoming college basketball and volleyball seasons, Charles Koch Arena will be featuring cutouts for fans to purchase.

Fans will be allowed to purchase two-and-a-half foot “fan faces” to be featured on the lower bowl of the arena for all men’s and women’s basketball and volleyball home games this season. The cutouts will be returned to the fans following the conclusion of the season.

Each cutout for the premium lower bowl will be $150 and a price of $50 for a non-guaranteed prime location. Proceeds from the program will go towards the Shocker Pride Fund.

On Sept. 11, the Wichita State Athletic Department forced the fund in hopes of recovering for the possible shortcomings in revenue, due to COVID-19.

“Well, I think it’s a common occurrence across the country right now in athletic departments that we’re all facing similar problems of different magnitudes,” Athletic Director Darron Boatright said in an interview on Sept. 17. “We know there’s going to be a shortfall of revenues coming in this year just due to limiting attendance based on local and state rules and regulations by the CDC.”

The cutouts will be sold on a rolling basis until they are eventually all sold out. The cutouts are limited in quantity but will be installed in waves starting on Nov. 16.

Currently, the city and county commissioner has approved 40% capacity for the upcoming season and these cutouts will provide another avenue for fans to be at Charles Koch Arena this season.

Boatright said that which fans get to attend will be based upon a priority point system which rewards longevity over the years. For student tickets, it is still undetermined whether they will go through a lottery system or having separate pickup times.