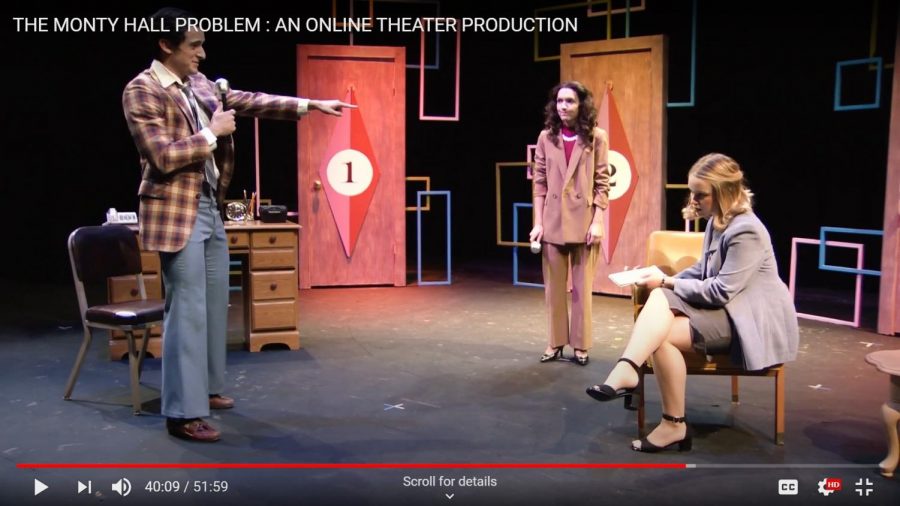 Screenshot of "The Monty Hall Problem" from WSUtv's Youtube Channel.

Theatrical productions have been few and far between since mid-March due to the pandemic. While the performing arts are yet to make their live return at Wichita State, “The Monty Hall Problem” is the online solution to the absence of theater at Wichita State.

“The Monty Hall Problem” was written by Ben Connor. The show was premiered on WSUtv’s Youtube Channel on Thursday, Oct. 29.

The show is about the true story of Marilyn Vos Savant, a columnist who solved math equations and appears to have been stumped by a problem for the first time in her life. She is played by student Sydeny Alder.

The show plays off of the vintage game show, “Let’s Make a Deal” because the problem involves the probability of selecting the correct door. During the show, Savant stars among characters such as Victoria, played by Gabi Johnson, and game show host, Monty Hall, played by Gary Woodburn.

Jeannine Russel, Assistant Educating Professor of the School of Performing Arts for 20 years, serves as the show’s creative director. She is also the director of the National Student Playwriting Competition; the competition that “The Monty Hall Problem” won last year.

Conveniently, the show was able to be shot with social distancing in mind.

While the challenge of doing something for the first time is daunting, Russel says the students were willing to face it head on.

“Outside of me, everybody involved is a student. They were very aware of the safety requirements, but also really dedicated to making this happen.”

Since there is no clear end to the pandemic, Russel believes that WSU Theatre will continue using an online format until it is deemed safe for audiences to return to theaters. She hopes that time is fast approaching.

“[My colleagues and I] are excited and ready to return to having live audiences, because that is the only thing we can’t replicate; that energy between an audience and a performer on stage. There’s no replacement for that,” Russel said. “So absolutely we want to but I also think it’s great for our students to experience this. There is kind of a crisis here, and how do you come together to solve that problem? They’ve done a really great job.”