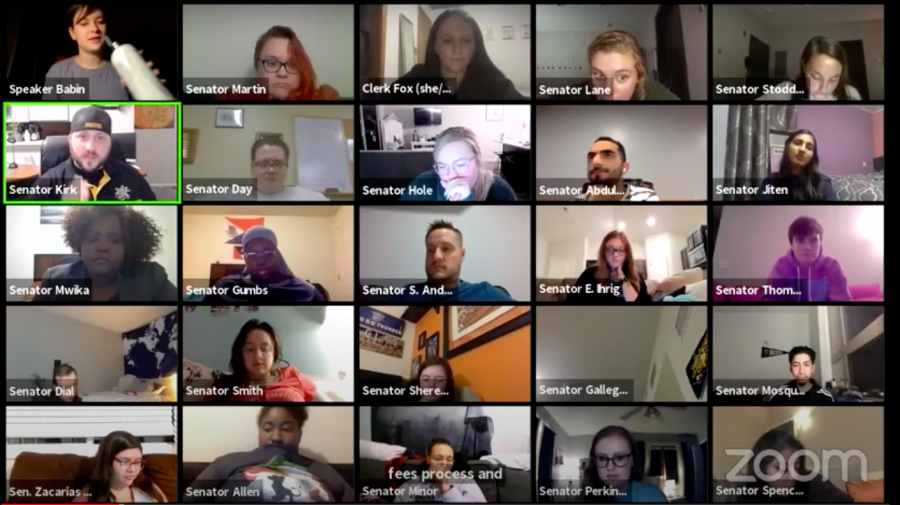 Ambrosia Naramore-Winfrey, a sophomore studying social work and minoring in spanish, was appointed to the Liberal Arts and Sciences Senator position.

“I was really interested in being a senator because I recognize how important it is to make sure senate seats are filled so that we can represent the student body to the best of our abilities,” Naramore-Winfrey said.

Naramore-Winfrey previously served in last year’s student fees committee. Senator John Kirk said this was one of the reasons he thought she was fit for the senator position.

“She knows exactly what she wants to do, she has a plan [and] she knows where she’s going,” Kirk said.

Asrayram Gopalakrishnan, a masters student studying industrial engineering, was appointed to the position of election commissioner. He said that with this position, he hopes to ensure a fair election.

“My primary goal here is to ensure a very fair election … [and] to ensure that the best candidates and the most deserving candidates get elected,” he said.

Senator Tayton Majors spoke in favor of Gopalakrishnan. He said he thinks Gopalakrishnan is good for the role because of his passion for representing all students.

“He is an extremely fair person,” Majors said. “Last year when I was in SGA he often came to me with concerns for international students, students that were in the same major, graduate students, he is very interested in providing students with the best possible experience at Wichita State University.”

Olga Lesnik, a freshman nursing student, was appointed to the position of health professions senator. Lesnik said she has always wanted to work in student government.

“The reason I applied as senator … was to learn something new about the community and bring new change with the knowledge I acquire,” Lesnik said.

Senator John Kirk spoke in favor of the bill because of Lesnik’s passion for the position.

“You can see and tell about her passion within her voice and what she’s intending,” Kirk said.

“It has been so long since I have been active at WSU,” Glenn said. “I decided since I wanted to be active again, I wanted to be involved in groups on campus that definitely make a difference.”

Glenn said she can relate to multiple issues college students are facing, which is one of the reasons she said she was fit for the role.

Vice President Mackenzie Haas said Glenn’s goal of providing opportunities for non traditional students was one of the reasons she wanted the senate to appoint Glenn.

“She wants to see more events and activities geared towards non residential and more non traditional students so I think she’ll be a great advocate for her constituencies,” Haas said.

Lila Kohler, a transfer student from Butler Community College and Kansas State University, was appointed into the underserved senator position.

Kohler said that her experiences at other schools have shaped her goals going into the position of senator at SGA.

“While I’ve been at all my different colleges as well as something I’ve noticed at Wichita State so far is there not many tutoring options for students with a busy schedule … there’s not a lot of flexibility,” Kohler said.

“I would like to work on expanding times, whether that be on Zoom or in person so people with busy lives can still get the help they need.”

Zoey Norton, a sophomore studying anthropology and spanish, was appointed as election commissioner. She said she applied for the position after a friend brought it up to her.

“I like trying new things … being able to get involved more with WSU and be able to have my own impact really captured my attention and I felt like this was a good opportunity to do so,” Norton said.

Norton said in the position she hopes to educate students about candidates and keep students involved in elections.