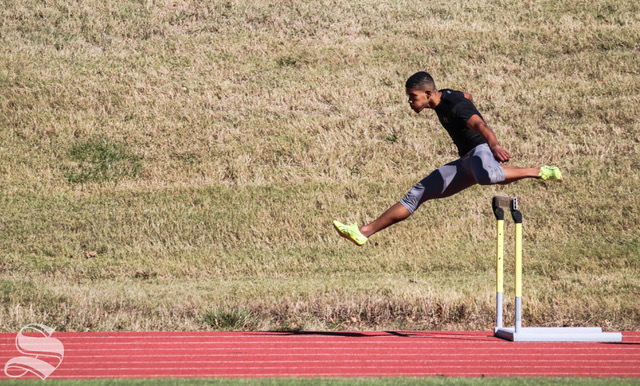 Wichita State junior Yuben Goncalves jumps over a hurdle during a scrimmage on Friday, Oct. 30 at Cessna Stadium.

For the second time this spring, the Track and Field program hosted a fall scrimmage with competition taking place throughout the week.

Just like many different programs across the country, Wichita State hasn’t been able to compete in any fashion after the season was canceled last spring. Director of Track and Field and Cross Country Steve Rainbolt said that was a major reason in hosting the scrimmage this past week.

“I began thinking about this since last spring when we missed out on an entire spring of track and field competition and feeling like it’d be great this fall to create some type of way for our athletes to recapture some of those missed competitive experiences,” Rainbolt said. “This is an attempt to do that.”

Although it is difficult to replicate competition through these scrimmages, Rainbolt said he was pleased with how the team was able to embrace this experience.

“When I say an attempt it’s good and we’ve had some good experiences and I’m pleased but it ain’t the same,” Rainbolt said. “There’s no other team opponents, there’s not fully automatic timing. I could name a whole bunch of differences between this and legitimate competitive meets. But these are pretty good and the athletes have looked forward to it. They have embraced and competed pretty hard.”

Rainbolt said that there were some notable performances throughout the week, but it was tough to name anyone specifically because of the number of solid performances across the board.

Although this was a good opportunity for the athletes to get out there and compete, Rainbolt said it was “a bit of a stretch” to compare it to other legitimate competition.

“The athletes looked forward to it but really and truly this is a glorified time trial,” Rainbolt said. “If the basketball team had a preseason scrimmage and had fans and they played the music and did the whole game experience that would be way closer to a gametime experience than what we’re doing. This isn’t like that.”

Despite it not being as competitive as a true track meet, Rainbolt said that these kinds of competitions can have an impact on the team and give them a sense of what they need to work on prior to the upcoming season.

“Where they’re at is one thing,” Rainbolt said. “‘I’m here, oh my gosh I better get going if I want to get to American Athletic Conference Championship level’ or also some technical issues that we can identify on film and we can figure out what we can do round into form. There’s a variety of different ways that an exercise like this can help prepare a team for a season.”

For the track and field student-athletes, it was a good experience after being away from it for such a long period of time.

“On the [one] hand this is very good,” Rainbolt said. “We’re very glad we’re doing this. We might just as prefer as coaches to get a long stretch of training and foundation in preparation for the season. But I feel like the athletes need these competitive experiences. If they didn’t do this they’d be away from competition for eight months, heck ten months. So this is good, giving them an opportunity.”

Although Rainbolt said that he was pleased with this, he still feels that serves as a disruption to the team’s training, from a coaches’ perspective.

According to Rainbolt, the program is planning to host an inter-squad scrimmage sometime in the next three weeks. Rainbolt said he still thinks this experience will be meaningful down the road.

“This does not stack up to being a legitimate competition but it is a meaningful time trial for these athletes and maybe helps them to test themselves and see where they’re at after having missed an entire outdoor track season in the springtime.”