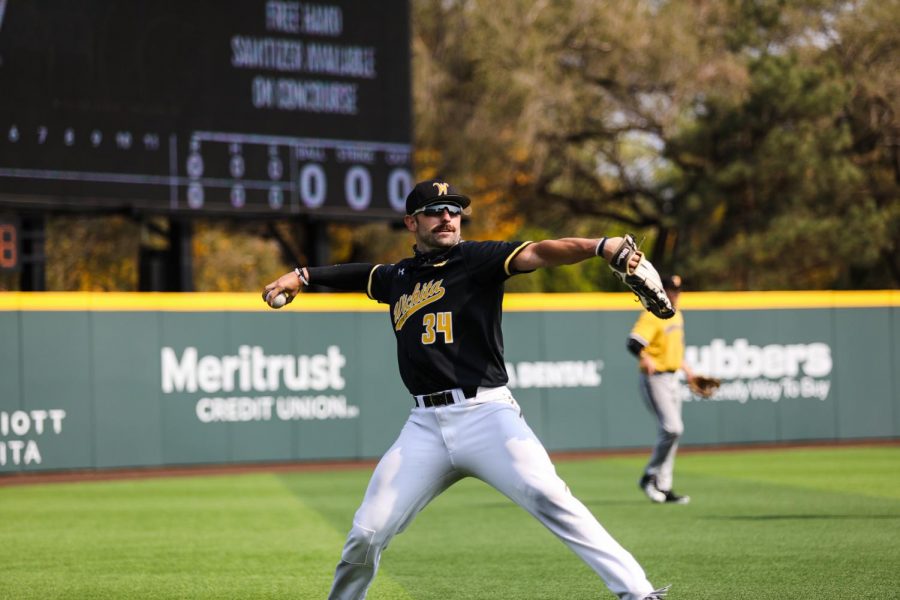 Just like many college seniors, Corrigan Bartlett was unsure what his final season of college baseball would like.

Bartlett, a Maize, Kansas native, had spent the last past two seasons at Saint Louis University and was prepared to graduate. But after the baseball season was canceled by the NCAA, it opened up another door for Bartlett to continue his collegiate career for one more season.

“Right when it happened, it was crazy because none of us knew exactly what was going to happen,” Bartlett said. “But after hearing that year of eligibility, I knew I was going to have to push for my future and look for that. So, Wichita State kind of came to mind for schooling and got in the transfer portal. We made things happen over here.”

Growing up in the area, Bartlett said the baseball program’s tradition that has been developed over the years was a big reason why he came back home for his final season of college baseball.

“I grew up in Wichita so being able to live out this dream of playing for my hometown school was just a dream come true,” Bartlett said. “That’s really what stood out was being able to come home and be part of something that’s been here for years.”

For WSU baseball coach Eric Wedge, one of the things that intrigued him about Bartlett was the collegiate experience he could bring to the table.

“He’s obviously proven himself to be a good collegiate player,” Wedge said. “I think he’s excited to be back here, excited to be a part of our program and we’re hopeful he’ll be a big part of what we’re trying to do next spring.”

In the abbreviated 2020 season at SLU, Bartlett hit for an average of .322 along with a homerun in 16 games played.

For Bartlett, he feels given his Division-I experience, the transition to WSU has been much easier than it could have been.

“Definitely the aspects of playing at the Division I level, having that experience has slowed things down,” Bartlett said. “Being able to come into a program like Wichita State, it’s made the transition easier than coming from high school.”

Given the difficulties with COVID-19, the team has spent less time in the locker room together, and Bartlett said he has been surprised how easy it has been to build team chemistry.

“It’s been like a family since day one,” Bartlett said. “Eric Wedge, Mike Sirianni, (Mike) Pelfrey, (Loren) Hibbs, all these coaches, they do a great job of pushing each other to be good men and baseball kind of takes care of itself. It’s about building the person and the baseball will play itself out.”

“It’s tough because it’s his first year here but yet he’s the veteran regarding college baseball. It’s kind of a fine line. It’s not like he’s been here for four or five years.So, he’s already made an impact but ultimately the impact he could have would be a little bit different if he was here previously.”

Since coming to WSU, Bartlett’s main takeaway from the coaching staff, has been their focus on the mental side of the game.

“That’s helped me the most and that’s kind of spread throughout the clubhouse too,” Bartlett said. “That’s what everybody takes away from it. It’s how tough it is to be a winner, it’s a small road traveled but Wichita State tries to take that road every single day and that’s what’s helped build this program up to where it was last year and where we’re looking for this year.”

For Bartlett, this Fall World Series was one of the coolest things the program got to do this fall.

“Seeing parents and family members cheering us on, it brought adrenaline into the veins,” Bartlett said. “It really pumped everyone up. Obviously, this was my first one at Wichita State but it’s like a full circle has come around in my life. Growing up here and then finally being able to play in that stadium for the first time was a pretty surreal moment.”

Currently, Bartlett is in the process of getting his master’s degree in the school of psychology and getting his doctorate sometime in the future. Bartlett said his goal is to help people all reach their full potential.

“I want to help families and help kids reach their full potential,” Bartlett said. “It’s a mandatory time where a lot of people are brought together from different realms of life and I think that social aspect of being able to help people maneuver through life through academics is something I look forward to helping with every single day. ”