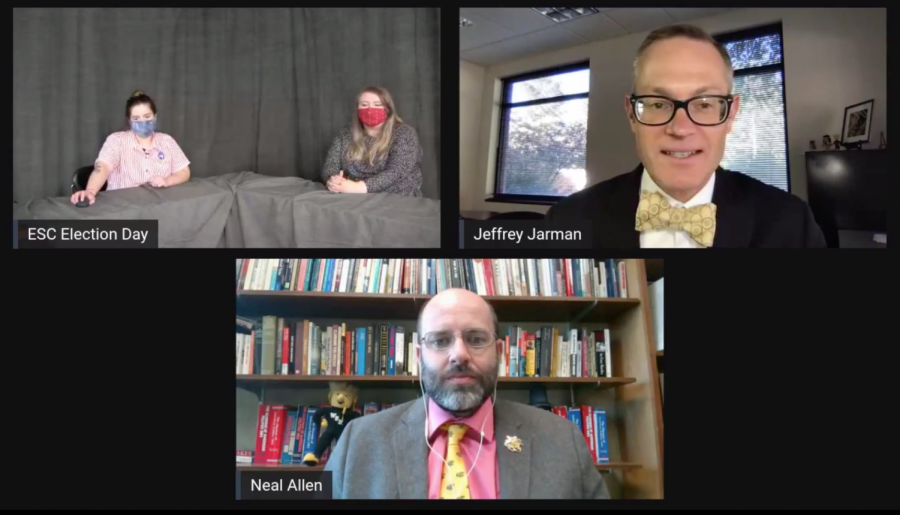 As people all across America scramble to get the polls, the Elliott School of Communication’s video production class offered some last minute tips and advice for voters during their live broadcast on Tuesday.

Both Jarman and Allen stated the need to exercise the right to vote, now more than ever.

“I value working in common with other Americans,” Allen said. “Both ones I agree with, and frankly ones I disagree with too. Because that’s really what democracy is about.”

Jarman added the importance of voting and its reflection on funding for the university, education, roads, health and countless other issues.

“Not voting cedes the ability to everyone else [who does vote] to help shape those decisions,” Jarman said.

With this election year’s increase in mail in ballots and early voting numbers, both professors said they are curious to see what the outcome of the election could look like.

“We’ve seen some efforts to restrict the total number of polling places,” Jarman said. “By contrast, I think what we saw in our community, the expansion of early voting and particularly the introduction of a megasight where people can [vote].”

“We have an election deadline now,” Jarman said. “Today just represents the last day that we get to vote.”

Both Allen and Jarman find it unlikely that Americans will find out election results tonight or even tomorrow.

“If I had to put a bet, the over-under I think is something like Thursday or Friday,” Allen said.

For more information on their views of the election, they will be doing a live analysis on TV Tuesday night— Jarman on KSN and Allen on KAKE news.

The hosts went on to describe the atmosphere around campus during the election season and both stressed the need to vote and be engaged with the community.

After presenting various facts about voting history and numbers, the hosts welcomed Ella Perkins to the live-stream.

As a representative for the Democratic Party at WSU, Perkins listed 3 big decision makers that determined how she casted her vote.

“The big issues for me were climate change, racial justice, and democratic norms,” said Perkins.

Perkins feels that different forms of media can have profound effects on election results. As far as shaping political beliefs, Perkins said she believes that Twitter acts as the main media platform for young people and Facebook for older populations to help them form their opinions.

“I do think young people having been raised in the digital age with social media are more likely to be a little bit more critical about the things they’re seeing online,” Perkins said.

Getting information and news from multiple, reliable sights is also important to Perkins.“I think that’s when you might run into issues-when you’re primarily just getting your information from Facebook or even just NPR, or Fox News, or MSNBC,” Perkins said. “I think that can give you a singular world view.”

In closing, the live-stream hosts once again urged people to exercise their right to vote as election day is fully underway.