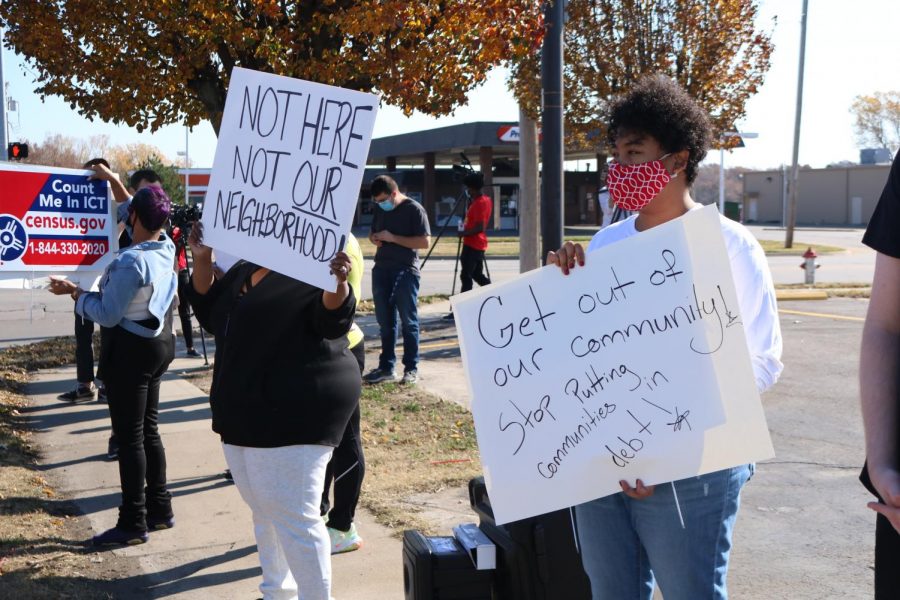 Wichita citizen's were protesting TitleMax and other loan businesses to from entering their community and preying on low income communities on Nov. 7.

Wichita community members took a break from the election news yesterday to bring awareness to another issue affecting the community: the opening of TitleMax, a payday loan business, on 13th and Oliver.

Protesters expressed their distrust of the business and its predatory behavior against those of low income and people of color. Many of them carried signs and passed out informational pamphlets about resources available for people in need.

The protest was organized by Ti’Juana Hardwell, a former Wichita State graduate and current realtor. Once she heard about the TitleMax moving in, she organized a Facebook event. The event on Facebook stated those protesting wished to stop loan sharks from profiting on vulnerable communities.

“They know we are vulnerable, they recognize that,” Hardwell said. “I understand that single moms and others can struggle … but we can not keep putting our families in this position for these places to set up.”

Payday loans have been known to reach a 391% interest rate in Kansas and while most loan businesses claim they offer money to people in time of need, others say they take advantage of those instead.

Many members of the community felt that payday loan facilities trap people in low income areas in a cycle of debt, due to their high interest rates on short term loans.

Hardwell said these businesses are profiting off of people of color and are targeting the communities they open up in.

Member of the Kansas Senate, Oletha Faust-Goudeau, was at the protest to show her support. She spoke to the crowd of protesters urging them to organize as a community and show their disdain for payday loan businesses opening in their neighborhood.

“It’s sad to see a place like this in this community,” Faust-Goudeau said. “This community deserves better, deserves a much needed grocery store instead of a chicken place, liquor stores and a TitleMax.”

While some have defended payday loans, others believed that its presence does damage to lower income communities. A study down by Howard University showed that low income areas look more desirable to payday loan businesses because banks usually deny loans to people with low incomes or bad credit.

Danielle Johnson, the Assistant Director for the Office of Diversity and Inclusion at WSU, said these loan businesses make it harder for people of color to have access to things most citizens need.

“As a community member it is important to me for us to have access to capital and access to low interest rates, but what we are finding is that these loan places pop up with high interest rates and not a lot of regulations,” Johnson said. “We have to regulate these things in Kansas.”

In Kansas, lawmakers are considering a bill that would make the maximum interest rate 36%. This would put a low cap on the amount of interest rate a loan business could charge. So far nothing has been passed yet.

Protestors also said they were trying to educate people on the dangers of “loan sharks” and payday loan businesses.

“It’s also about education, we need to understand what we are signing,” Johnson said. “Your alternator goes out, you can’t make rent, these things happen and if you must utilize these loan places people need to understand the predatory nature of these places.”

The protest offered information about alternative resources open to the community. Free resources for those in need can be found through programs like the ICT Community Fridge project for food. The program Center of Hope offers services for those who need help with utilities.

Hardwell encouraged community members to use these free resources and continue to protest loan businesses entering the community.